Taylor Bennett ’03 at Lime: Embracing risk and welcoming change in the tech sector 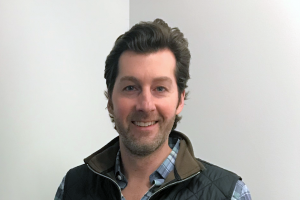 UNC Hussman alumnus Taylor Bennett ’03 is the global head of public affairs for Lime, the scooter-sharing company. Bennett was born in Vermont and grew up in North Carolina. Carolina was the only university he applied to as a high school student in Winston-Salem. His brother, Hunter, followed him to Carolina two years later. Taylor Bennett graduated in 2003 and built his career at Edelman. Eventually, he moved to the tech startup world, where he served as communications lead at Uber (2014–2016) and head of public affairs at Pandora (2016–2018) before joining Lime. We spoke with Bennett recently. Here's an abbreviated, edited version of that conversation.

Is there a professor that you remember best?

Yes. I wish I could remember his name. He taught community journalism. A tall, slender guy, glasses. He was an engaging and smart guy. He was associated with a local community paper around Chapel Hill and I interned there, so I spent a semester writing stories, researching and interviewing folks. I remember I did a story on the 24-hour dance marathon at Carolina. We all felt really successful by the end of that class, with our bylines in print being an added bonus.

How did you go from there to a public relations position at Edelman in Washington D.C.?

It took me a while to find my passion. In my advertising classes, others were doing the really incredible, creative campaigns. I loved it, but it was not for me. I found that marketing and public relations were most suited to my interests and talents. I remember building a proposed campaign for the latest Toyota model in a marketing class, and presenting it. I learned a lot from that. The more “immersion” you can do as a student, the better.

I headed to Washington, D.C. literally a week or two after graduation. What a terrible decision [laughs] — I should’ve taken the summer off! I spent a year in a marketing role at Corporate Executive Board. That was a good experience and a nice springboard to the public relations side at Edelman. I then focused on crisis and reputation management and public affairs, with an interest in the tech sector. I worked with big brands like Samsung, Walmart and Microsoft. Toyota, too. Embedding with a team was fascinating. I spent 3 or 4 months in Seoul. 2-1/2 years in Bentonville, Arkansas. Lived in Abu Dhabi for a while. Those immersive opportunities really built up skills that I use on the job today. How to manage reputations at the global level. Work with top-tier national press. Organize a lot of of multi-faceted cross-channel campaigns.

“Immersion” is incredibly important in the agency world as well. At Edelman, I would always raise my hand for those projects. I learned so much from spending months in our clients’ headquarters, immersing myself in their culture and their business as their on-site PR person. That really helped me understand our clients’ needs.

After eight years at Edelman, the next step would have been to move into senior ranks and focus on new business. I liked building strategy and executing it more. So I decided to try something new. I jumped to the Adfero Group, a boutique public affairs firm, and did corporate public affairs work for large companies like Microsoft and American Airlines.

Why did you make your next move?

The tech sector really speaks to my interests and skills. I wanted to move my career to the in-house tech side and I saw an opportunity with what was at the time a start-up with lot of potential — Uber. I managed public relations for eastern North America. I enjoyed telling the Uber ride-sharing story across dozens of markets, and managing our public affairs and policy communications work. I'd found exactly what I wanted to be doing.

Talk about what it takes to work in the tech sector.

At first, it’s all about keeping up with rapid growth. I remember weeks were I was in four cities in five days. Planes, trains and automobiles: nonstop! It’s exciting to be part of change. We were literally disrupting the taxi industry. In D.C. back then, you’d walk to a corner and hail a taxi. It might never come. Now we take it for granted that an Uber driver will magically show up. We were changing the way we move around our cities. Crafting policy. Activating riders. Mobilizing a grassroots approach to regulation. Dealing with sheer demand. Back then “move fast and break stuff” was the mantra.

Then you need other skills. Issues management. Managing ongoing crises. I’d had that experience at Edelman and it came in handy at Uber. From data breeches to health scares to everything in between. In crisis and issues management and I’d say in public relations more generally, you have to be unafraid to work under pressure, all the time. You can’t be risk-averse. You have to be nimble and flexible, calm under pressure, and have some ability to go with the flow, because especially in the technology sector: change will happen.

And speaking of nimble, when the communications team at Uber brought in a new head of global comms and policy from Google, she started fresh and I had to move on. It was my first job in tech and I didn't realize what to expect, but in hindsight 18–24 months is normal for start-ups. Help build it. Get experience. Hop to the next one. It's the culture in the tech startup world, for better or worse.

I moved on to take a position as director of public affairs for Pandora, the music streaming service which had gone public in 2011. I led our public affairs work in Washington and helped oversee our new product launches and PR around the company’s re-branding in San Francisco.

How did you get to Lime from there?

The lure of the start-up transportation idea! Some old Uber colleagues were getting back together and launching Chinese bike sharing company, Ofo, in North America, and I was excited about the opportunity, so I joined as head of communications. We grew for a little under a year and successfully launched in 30+ cities. I hired a team and built out a comms shop. But 10 months later, we ran out of money and quickly disbanded. I had to lay off my entire team, which was sobering. From there, I moved to Lime, which was one of our biggest competitors at the time.

Everyone in the startup tech space is an adrenaline junkie. We are gluttons for punishment, I guess! 24/7 is exciting—you see in real time that you're making a tangible impact. That’s why I do what I do. Lime is the global leader in micromobility and we're changing communities around the globe. It’s a space I really enjoy. Similar to Uber, the pace is exciting. And Lime has a really great environment. I’ve seen a variety of tech cultures. This is one with a lot of collaboration and camaraderie. The culture has a similar Type A drive and need to move quickly, but at the same time is very supportive and is backed by a smart vision and strategy. So I was comfortable jumping on this rocket to see where it’s going!

I head up our global public affairs team, where our brand consumer side works more directly with the marketing and product teams. When we launch a new market in Paris; Tel Aviv; Santiago, Chile: my team tells the story locally and partners with our government relations counterparts to advance policy or regulatory issues. Transportation is very local so we find it best to tell the stories locally as well. Our pubic affairs team is spread around the globe, six in EMEA, three in North America and one in Australia. Ten folks on the team. We’re small for a global operation but doing big things. I report to our general counsel, who spent five years at Uber and is familiar with this world.

How many different hats do you wear on any given day?

Strategy. Crisis comms. Public affairs campaigns. Communications plans. Here’s my elevator pitch: we’re the global leader in micromobility. Bikes and scooters and are small form transportation options. Our mission is to get people out of cars and provider greener ways to get around. Climate change is the threat of our day. Lime is built on a mission to help to alleviate that, to find greener alternatives. Scooters are a popular way to do that. Bikes. Scooters. Small smart cars in Seattle. Partnering to get riders out of two-ton vehicles and into a better, greener way to get around. Reduce congestion.

Do you use Lime scooters yourself?

Yes. I’m in D.C. where you can take a scooter from a Metro or train station to your home or from the office to a train station, that’s solving the “first mile, last mile” challenge for distances that are a little too long to walk but not long enough for an Uber ride. I hop on one from the Metro to my house. Weekends, I love using a scooter to get to the drugstore or a grocery store. And in the spring months: Perfect.

What's your advice to students interested in public relations work?

When I was at Edelman I assumed I would have three or four careers in my lifetime and would stick around for a decade at each. It’s different now. I’d tell students to do what you enjoy. Follow what makes you happy. Go to a start-up and work 12 or 24 months. That’s perfectly acceptable. That’s the way things are done, especially in a start-up world. Tech moves so quickly; so you should as well.

Also: the power of mentorship. I didn’t embrace it in school or in the early days. My focus was getting experience on my resume. My boss at Uber, Lane Kasselman, now runs Greenbrier Partners in San Francisco. I learned so much from him at Uber about communications and public relations, but also about how to be a good manager, how to encourage and excite your team. I’ve hired him numerous times over as a consultant. So I’d tell students about the power in relationships. Find someone you trust and learn from them. Foster that relationship. You have no idea how you might tap into that relationship again. It’s amazing how small the world really is. Find a good mentor. A professor. A classmate. Or a peer, like in my case.