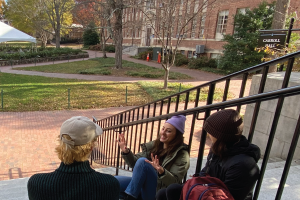 Erin Siegal McIntyre knows that building trust in news starts locally and can mean difficult conversations often focused on groups that have been historically underrepresented by traditional media outlets.

That’s why this semester the UNC Hussman assistant professor partnered with the national nonprofit Cortico and its Local Voices Network to hold community conversations addressing inequity in her “MEJO 459: Community Journalism” class.

McIntyre’s class was one of five journalism classes across the country taking part in a research project that pairs journalists with journalism students to facilitate public dialogues with marginalized groups about community inequities. Susan Robinson, professor of journalism at the University of Wisconsin-Madison, is the project’s principal investigator.

Journalist Victoria Bouloubasis '05, who currently works with news outlets Southerly and Enlace Latino NC, worked with McIntyre’s class to host community conversations, analyze them and use them in news stories. The class’ efforts will be studied by Robinson’s research team with a goal of creating a model for other such newsroom-journalism school partnerships that help communities bridge differences and polarization.

The class’ students were split into five groups for the project, each tasked with creating community conversations around a specific topic — education equity, housing equity, climate change, transportation equity, and policing and the criminal legal system.

After the conversations, which included community representatives from government, nonprofit and academic settings, each group wrote a story examining a topic from their conversation.

McIntyre said the community conversations project mirrored many of the topics she already explored in her “MEJO 459” course, such as building trust and interacting with sources.

The project’s focus on outreach, specifically with marginalized communities, is a crucial skill for journalists, she said.

“Journalism as a practice is not comfortable. I want my students to be able to have these types of hard conversations so they can go out in the real world and feel empowered to talk about topics like race inside and outside the newsroom,” McIntyre said.

The class also included several guest speakers who spoke on diversity and other issues in the journalism industry throughout the semester, including T. Marie King, Cortico’s Head of Local Voices Network; News & Observer reporter Aaron Sanchéz-Guerra; and Bruce Shapiro, executive director of the Dart Center for Journalism and Trauma at Columbia Journalism School.

Hunter Haskett ’22 took part in the education equity group, which held a conversation with teachers, students, parents and administrators from the Chapel Hill-Carrboro City Schools communities in early November.

Her group’s story focused on the efforts to increase the number of Black male teachers in K-12 schools in Chapel Hill and Carrboro and the importance of male representation for students.

“We initially got our story topic from our conversation and actually were able to go back and re-interview a conversation participant who is a Black male middle school teacher,” Haskett said. “I learned a lot about the lack of representation in our public schools systems.”

Haskett also learned a lot about the importance of community journalism.

“Community journalism gets overlooked a lot but is now finally starting to get the attention it deserves. It is such an important tool and resource to a community in providing information on health, jobs, education and government,” Haskett said. “Local newspapers are the true ‘watchdogs’ of society and play a vital role in keeping democracy running.”

Bouloubasis, whose work has often centered around the South’s growing Latino community, agreed.

“Local news is so impactful,” Bouloubasis said. “Even though a lot of legacy local news outlets are struggling, there’s a lot of new local news being created, such as hyperlocal news websites. There are so many local news opportunities right now.”

UNC Hussman has been instrumental in creating some of those opportunities, from the local news research and professional media workshops of the school’s Center for Innovation and Sustainability in Local Media to other courses like “MEJO 463: News Lab: Creating Tomorrow’s News Products” that partner the school’s expertise with the local news community.

However, McIntyre doesn’t just want her students to ask questions of others, but of themselves, and of the very craft they hope to practice. She wants her students to see themselves as drivers of journalism’s future — and that future starts with conversations today.

“I think conversations around how journalism is done are extremely important and there’s no better place to have those conversations than the classroom,” McIntyre said.