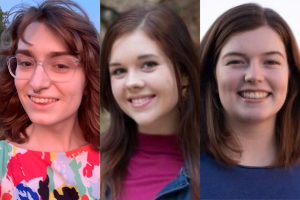 UNC Hussman School of Journalism and Media students Alice Bennett ’22, Kayley Carpenter ’21 and Maddie Ellis ’22 — three of the 19,117 undergraduate students currently enrolled at UNC-Chapel Hill — will be inducted into the Carolina chapter of the Phi Beta Kappa honor society in a virtual ceremony at 5:30 p.m. on Friday, Oct. 16. The three join 181 other Carolina students being recognized by the nation’s oldest honor society for exceptional academic achievement in the arts and sciences.

Alice Bennett, a Greensboro native, interned at the East London Out Project last semester in London, and was a senior writer at The Daily Tar Heel. Kayley Carpenter is majoring in media and journalism (Ad/PR) and drama. Carpenter virtually interned at NYC’s famed Apollo Theater this summer and studied Shakespeare abroad in London and Oxford last year. Maddie Ellis, a dual major in media and journalism and English language and literature, is University Desk Editor at The Daily Tar Heel and writes for The Charlotte Observer’s city guide CharlotteFive, where she interned this summer.

The ceremony will be live-streamed for inductees and their family members only, and shared later this month with the public in the chapter’s website.