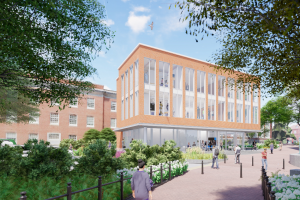 Our new Curtis Media Center, a three-story brick and glass beacon stretching 45 feet into the sky, will open in 2022. With double-pane, insulated exterior glass wrapping all of the fully daylit programmed spaces, the sparkling center is the first new building in the academic heart of campus since nearby Murray and Venable Halls in the Science Complex were dedicated in 2010. The Kenan Music Building opened in 2009. The Max C. Chapman Jr. Hall west of Carroll Hall, replete with an astronomy deck, was completed in 2007.

A cantilevered profile, both eye-catching and problem-solving

The nearly 13,000-square-foot Curtis Media Center widens from 2,717 square feet on the first floor to 3,600 on the second and third. The result makes for an eye-catching silhouette. Architect Phil Szostak, FAIA, and his team designed the cantilevered classroom building in partnership with UNC Facilities Planning and Design. The architecture maximizes space around an available (circa 1925) Phillips Annex “footprint” constrained by the complexities of elaborate underground water, storm, sewer, steam and chilled water utilities.

First floor broadcast studio activity is on display via a floor-to-ceiling wall of glass along the east side of the building. The glass was installed at a slight angle to soften sound. A 16-by-9-foot high-definition LED screen on the opposite studio wall is visible through that eastern wall of sound-insulating glass. Planned audio feed from the live or taped broadcast on the jumbo screen can be projected out onto the patio, allowing the garden space around the building to become an outdoor screening area during athletic games, cultural performances and other broadcast opportunities on campus.

Light-filled space on the top two floors functions as one large rectangular classroom or divides into two square classrooms per floor. The classrooms can accommodate a mix of lecture-based and active learning methods. An audio system projects 9,000 virtual microphones and transmits via a multitude of speakers into each classroom. Video is captured by two cameras and projected via a high-definition projection screen and multiple flat panels per floor. Presentations can be simultaneously livestreamed, broadcast and recorded in all four classrooms and the first floor studio. Carpeted floors, insulated walls and sprayed acoustic ceilings soften any ambient sound.

Audio-minded alumni will look forward to seeing the cutting-edge podcast studio on the second floor of the Curtis Media Center, which is visible through one full wall of interior glass. That transparency allows for a participatory audio broadcast learning experience in this space — and opens the studio to a stunning view of Carroll Hall through the exterior windows nearby.

The Renewable Energy Special Projects Committee (RESPC), a student campus funding resource, approved student fee funding for the rooftop photovoltaic solar array. A solar converter in the basement transfers the captured electricity from DC to AC. During occupancy solar will reduce the power need by 25% or more and sunny off days will return electricity to the university grid.

The Curtis Media Center is surrounded by an inviting, landscaped garden area which includes shade trees and stone walls. The walls provide seating and define a planter bed alongside the sidewalk that runs diagonally from East Cameron Avenue to Polk Place. A patio area closer to the building is universally accessible from the pathway and from the north exit of Carroll Hall.

A bi-directional fiber connection between the Curtis Media Center and UNC Athletics facilities provides an opportunity to enhance existing partnerships and create new ones. For example, the center could become a secondary studio source when Athletics studios are full; or “from the heart of campus” broadcasts can be shot on location from the CMC studio for ACCNow broadcasts. We are in talks now with Carolina Performing Arts leaders about the possibility of a similar interconnectivity with Memorial Hall.

Makerspace to become a hive of creativity

A fifth classroom space with multiple power outlets on the floor can be found in the nearly 3,000 square foot lower level of the Center. Dubbed a “makerspace,” the flexible learning area will provide a dedicated home for FashionMash students at Carolina, who hone experiential marketing skills during their immersive work with creative brands from around the globe.

The Curtis family’s investment in our future continues to inspire additional giving, allowing us to uplift and equip the space. To date, generous donors have supported 10 of 15 named spaces with over $3 million committed. Still available: the makerspace — heart of creativity; the welcoming terrace — inviting campus passersby to join us; the control room adjacent to our state-of-the-art studio; and two innovative learning spaces on the second floor. In addition to named spaces, 25 participatory donors will be emblazoned on a donor wall just inside the north entrance to the building