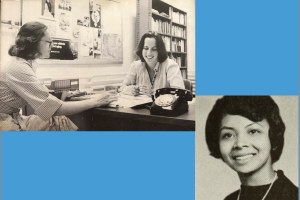 As Women’s History Month drew to a close, the UNC Hussman School of Journalism and Media reached out to three trailblazing women who have made their mark on the school — one as UNC’s first Black woman undergraduate and two as pioneering women faculty members, among the first at the school.

We asked about their experiences at UNC Hussman, the women who motivated them and issues they saw still affecting women in academia and journalism.

The stories of Karen Parker ’65, Jane Brown and Jan Yopp ’70 are individual, but in their reflections are threads of perseverance, female mentorship and a commitment to education woven into the stories of so many women who have left their mark on UNC Hussman.

(Pictured: Yopp, left, and Brown, right, in Brown’s office in Howell Hall in 1978 — the former site of what is now UNC Hussman. Parker as a UNC undergrad.)

In 1977, Jane Brown and Jan Yopp became fast friends as new, young professors at what is now UNC Hussman. Along with Carol Reuss and Margaret Blanchard, they were among only four women on the faculty, teaching to a student body that was overwhelmingly male. (Lola Lee Mustard had been the first female faculty member, joining UNC Hussman in 1948. Regina Sherard became the first Black female faculty member at UNC Hussman in 1983. Jean Folkerts became UNC Hussman's first female dean in 2006.)

Eventually, both Brown and Yopp held leadership roles at UNC Hussman and UNC.

Brown served as UNC Hussman’s James L. Knight Professor and a fellow in the Carolina Population Center. She conducted research on how adolescents use media and how media influence their health behaviors. She served as chair of the UNC Faculty Council and director of the Institute for Arts and Humanities' Academic Leadership Program. She retired in 2012.

Back in 1977, both knew their mere presence as UNC Hussman faculty showed that women could be leaders.

“Students don’t see themselves in a role unless they see people like them doing those roles,” said Yopp, who had a total of two female professors when she was a UNC undergrad.  As a professor, Yopp wanted to show female — and male students — that women belonged in leadership positions, whether in front of a class or heading a newsroom.

Yopp had done both. Before coming to academia, she accomplished another first — becoming the now defunct Raleigh Times’ first female assistant city editor. It wasn’t always easy to be one of the only women on the job. Yopp remembers getting called her share of “honeys” and “darlings” and “sweethearts” by sources, and at times didn’t feel like interview subjects took her seriously.

But she stayed focused with an intensity instilled in her by her Florida housewife mother, a former nurse who’d wanted Yopp to have the choices that a good education and career could provide.

Brown also grew up with a strong mother in a house where education was paramount. She grew up on a Maryland dairy farm, but her mother hailed from Long Island, New York, where she had worked for her family’s weekly newspaper as a reporter.

From her mother, Brown developed a love of journalism. She attended the University of Kentucky in 1968 as an undergrad. It was there, working for the university’s student newspaper, that she became ensconced in the burgeoning women’s movement of the late 1960s, writing about controversial topics like reproductive rights.

“It was confusing, but it was exciting — everything was up for grabs. What did it mean to be a woman?” Brown said. “It was clear that so much needed to be done to establish equal footing for women.”

One thing that needed to be done was expanding what society — and women themselves — thought they could do professionally. As a Ph.D. student at the University of Wisconsin, Brown majored in communication research, specializing in research that looked at gender’s influence on occupational choice.

Brown said that although women’s occupational choices have broadened, society still isn’t doing enough to help working mothers — or fathers — balance career and families with policies like longer parental leaves. “We’re so far behind other countries in helping working parents,” she said.

Yopp noted society needed to do a better job of instilling girls with confidence in their own abilities — traits needed for career and personal success. She also pointed to the importance of female role models and encouraged women who reached leadership positions to act as mentors for other women.

Karen Parker also grew up with a strong mother who valued education. As an African American growing up in Winston-Salem, North Carolina, Parker faced a segregated society, but as culture shifted and educational institutions desegregated, her high school guidance counselors encouraged her to apply to historically white colleges.

“I think they knew I’d be strong enough to take it,” Parker said.

In 1963, she became UNC’s first African American female undergrad after transferring from the Woman’s College in Greensboro. A love of writing and current events eventually brought her to what is now UNC Hussman with dreams of becoming a copy editor.

“I love writing headlines, and I like finding mistakes,” she said.

As a woman and a person of color she faced two barriers of bias, though she noted the similarities of both. Any group that is discriminated against faces presumptions of being “less than” and “not as good.” Parker fought against such notions by proving her academic prowess with good grades and keeping her composure.

Though she found UNC Hussman mostly welcoming, there were times she was verbally harassed on the UNC campus, but if that had made her leave “the ones who didn’t want me there would have won.”

Parker was a leader in the civil rights movement on campus, participating in sit-ins, marches and protests, and was arrested and jailed twice. She also continued to pursue her journalism degree while serving as the editor of the UNC Journalist. She was inducted into the Order of the Valkyries while a Carolina student.

Her diary in the Southern Historical Collection at Wilson Library contains accounts of the civil rights movement in Chapel Hill and her experiences on campus. She went on to become a prolific newspaper copy editor.

Parker also learned to keep her composure as a professional as she entered newsrooms where female copy editors were still a rarity. After graduating in 1965, Parker was a copy editor for the Grand Rapids Press in Grand Rapids, Michigan. She also worked for the Los Angeles Times and other newspapers before going to work for the Winston-Salem Journal.

She stayed focused and let her work’s excellence speak for itself. She knew that her presence, and the presence of women in general, was important in the newsroom.

“We’re half the population, our perspectives and voices are important in journalism,” Parker said.

Yopp said she agreed about the importance of women’s voices in journalism because a workforce was made better and stronger by diversity of all types.

“Women bring a different perspective because of their lived experience. What you need in the mix are the voices of different lived experiences,” Yopp said. “You can’t accurately cover society if you don’t bring different voices to the table."