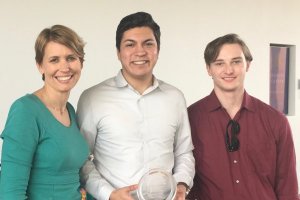 Established by Ernest H. Abernethy ’22 in 1941, the annual award honors the most distinctive undergraduate work in student publications.

“It’s uniquely humbling to have my tenure at UNC topped off with recognition like this,” said McGee, who was recognized for his investigative work surrounding the Silent Sam Confederate monument.

Documenting such a historic event represented a key component of what drew McGee to studying journalism. “Journalism is a really interesting way to show current events with historical connections,” he said.

Robinson pointed to McGee’s precision as a journalist in describing why he nominated him for the award. “He does it right. He attempts to tell readers information they don't know. He shines light into dark spaces. He is intrepid in his reporting and journey to get the facts out,” Robinson said.

“Marco is a versatile editor and reporter with a wide range of skills,” said Bechtel in his nomination. “He also has strong news judgment.”

Quiroz-Gutierrez credits those strong skills to experiences at both UNC Hussman and The Daily Tar Heel. “The classroom gave me the foundational skills. The DTH has enabled me to use what I’ve learned in the journalism school and apply it to real-life reporting issues,” he said.

Quiroz-Gutierrez cites some of his proudest moments as stories where he was able to use his Spanish skills to report on the area’s Latino community.

Erica Perel, general manager of The Daily Tar Heel, appreciates the award’s acknowledgment of the value of student publications, not only to the institutions they serve, but to the students who work at them.

Besides allowing students to exercise their craft in a real-world scenario, student publications also teach students the important skills of decision making, responsibility and collaboration.

“Those factors combine to make student publications vital to our campus but also incredibly challenging for a group of 18-22 students to do well,” Perel said. “That's why it's heartening and meaningful to recognize those who do distinctive work in student publications.”