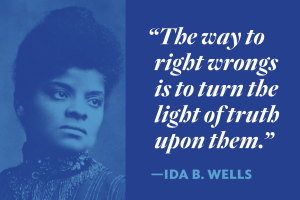 On Thursday, Aug. 15, the UNC Hussman School of Journalism and Media proudly announced its new affiliation with the Ida B. Wells Society for Investigative Reporting, an organization dedicated to increasing and retaining reporters and editors of color in the field; and to educating news organizations and journalists on how the inclusion of diverse voices can raise the caliber, impact and visibility of investigative journalism as a means of promoting transparency and good government.

“Diversity, equity and inclusion in journalism are essential to a healthy democracy and a relevant industry. We’re proud to support an initiative of this caliber to help make newsrooms more reflective of the communities which they report on,” said Hussman School Dean and John Thomas Kerr Distinguished Professor Susan King.

The society, to be housed in the Hussman School’s Reese News Lab, was conceived by four black journalists in response to what they recognized as a dearth of journalists of color doing investigative reporting.

In February 2016, the founders convened in Memphis, Tennessee, and laid out their vision for the society, which is named for Ida B. Wells (1862–1931), a pioneering black investigative journalist who began her career in Memphis before her press was burned and she was driven out of town after publishing an anti-lynching exposé.

“Across the media landscape, there were not a lot of black, Asian, Latinx or Native journalists doing investigative reporting, largely, we thought, because people in those organizations don’t see these folks as the types to do investigative reporting,” remembered Ron Nixon, a co-founder. "So those journalists are not given opportunities to do so.”

“We wanted to do something to change that,” Nixon continued. “To train and prepare a pipeline of people to do investigative journalism.”

The Ida B. Wells Society today is spearheaded by three of the original founders, who continue to steer the vision, content and future of the Hussman School-affiliated organization.

Nikole Hannah-Jones ’03 (M.A.) is a domestic correspondent at The New York Times Magazine focusing on racial injustice. She envisioned and helped shape the magazine's The 1619 Project, an ambitious special project launched on Tuesday, Aug. 13, examining how the legacy of slavery continues to influence life in the United States. She's been recognized with many top journalism accolades, including the National Association of Black Journalists’ Journalist of the Year Award (2015), the University of Georgia's Peabody Award (2015) and the Columbia University’s Paul Tobenkin Memorial Award (2013). Her thought-provoking reporting includes “It Was Never About Busing” (2019), “Choosing a School for My Daughter in a Segregated City” (2016) and the hour-long radio piece “The Problem We All Live With” (2015). She wrote for The Oregonian for six years after getting her start at the The News & Observer covering the education beat. She was a Roy H. Park Fellow as a graduate student at the Hussman School from 2001–03 and delivered the Hussman School commencement speech in 2017, the year she was named a MacArthur Genius Grant Fellow. She befriended her daughter's godmother, fellow graduate alumna Joy (Buchanan) Harrington ’03 (M.A.), while they were students at Carolina. Hannah-Jones graduated from the University of Notre Dame with her bachelor's in history and African-American studies.

Ron Nixon — the international investigations editor at The Associated Press — manages a team of reporters based in London, Cairo, New Delhi, Shanghai and Washington, D.C. Previously, he was the Homeland Security Correspondent for The New York Times, an organization he joined in 2005, where he covered border and aviation security, immigration, cybercrime and violent extremism. He is the author of the book “Selling Apartheid: Apartheid South Africa’s Global Propaganda War” and is a visiting associate for journalism and media studies at the University of the Witwatersrand in South Africa. He previously worked at The Minneapolis Star-Tribune, with the grassroots nonprofit Investigative Reporters and Editors and at The Roanoke Times. Nixon is a Marine Corps infantry veteran who saw combat in the 1990 Persian Gulf War. As a Marine, he spent time in Camp Lejeune in Jacksonville, North Carolina, and then in Durham, North Carolina, as an editor and reporter with Southern Exposure magazine early in his writing career. Nixon studied music theory and composition at Alabama State University.

Topher Sanders covers race, inequality and the justice system for ProPublica. In 2019, he was part of a team recognized for its coverage of President Donald Trump’s family separation policy with prestigious Peabody and Polk awards, a Pulitzer Prize finalist placement and a Paul Tobenkin Award for “Zero Tolerance.” In 2018, he and reporter Ben Conarck’s multi-part investigation, “Walking While Black,” received a Paul Tobenkin Award, the University of Colorado's Al Nakkula Award and numerous other distinctions. In 2017, Sanders and colleague Ryan Gabrielson received the John Jay College/Harry Frank Guggenheim Award for excellence in criminal justice reporting and an Aronson Award for Social Justice Journalism for their multi-part series “Busted,” an investigation of the systematic misuse of roadside chemical field tests by police. Prior to ProPublica, Sanders was investigative editor at The Florida Times-Union. His career began at the Montgomery Advertiser in Alabama. Sanders is a graduate of Tuskegee University and a lifelong writer whose fourth-grade essay about his “Grandpops” garnered Sanders his first writing award.

Susan King, a former broadcast journalist, high-level federal government appointee and Carnegie Corporation executive whose career has spanned the school’s two major disciplines — journalism and strategic communications — will be an ex-officio member of the society’s board of advisers and a partner with the co-founders.

The Ida B. Wells Society for Investigative Reporting offers investigative journalism training workshops throughout the United States and is developing a yearlong fellowship program based in New York City. Society workshops cover the use of advanced technology, interviewing techniques and the latest data-gathering and fact-checking resources, and build on story pitching, project management and narrative storytelling skills.

From July 22–Aug. 2, 2019, the society partnered with ProPublica for the fourth annual Data Institute, a free 12-day hands-on interactive workshop on using data, design and code for journalism. Participants worked on an interactive data journalism project — with real data — from beginning to end. Other recent training sessions include a Friday, July 26, workshop at Lenfest Institute in Philadelphia and a series of workshops at the National Association of Black Journalists’ annual conference in Miami from Aug. 7–11, 2019.

King noted that the society’s mission dovetails nicely with the Hussman School’s mission.

“Reese News Lab is an innovative setting for journalism that encourages students to explore design thinking and hone data storytelling skills, making it a natural home for the Ida B. Wells Society,” said King. “Together, we will prepare a generation of innovative, data-savvy and ethical investigative journalists for the diverse newsrooms that are essential to a thriving democracy.”

Sanders added, “We’re ecstatic to be at a university that understands and supports our mission. Having a partner like the Hussman School is going to mean a lot, not only to the society, but to all the journalists who we are involved with in the years to come.”

“I’m very proud that we’ve moved to the Hussman School,” said Hannah-Jones. “It’s such a place of journalistic excellence. It means so much to me. And I love that we’re moving to the South. Having a presence there — where so many black journalists are and the people that we write about live — is critical.”

Nixon noted, “Carolina brings us the place where we can grow the organization. We can bring people in and create a working relationship so that it’s not just a place where we’re housed. Carolina is a place that is home, a partnership that we both benefit from.”