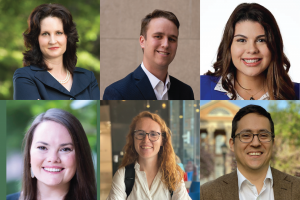 The UNC Hussman School of Journalism and Media community of scholars left a deep footprint at the August 2022 conference of the Association for Education in Journalism and Mass Communication held in Detroit, Michigan.

Five of the school’s graduate students earned top national honors for research papers, joining UNC Hussman faculty, alumni and administrators in extending the school’s tradition of leadership among its peers.

The students, along with Associate Professor Amanda Reid, a co-author on two of the papers, are pictured at right.

Her paper, “Pronouns, framing, and (in)visibility: Considering the gender visibility frame,” explores the literature on transgender news media representation and points to a gap in research around pronoun usage. “This is such an important topic. The media plays a huge role in the visibility and perception of nonbinary people among the public,” Crawford said.

The paper illuminates a contradiction: While gender-neutral pronouns have become more visible in media since style guides (such as the Associated Press Stylebook) approved the use of gender-neutral pronouns, those approvals often come with “othering” suggestions, such as telling writers to use language explaining to the reader that the gender-neutral pronoun was being used for a nonbinary person — an explanation that would not be given for a person using male or female pronouns.
Crawford concludes her paper with a suggestion for an in-depth content analysis on media style guides’ rules for nonbinary pronouns and ways to make those suggestions more inclusive.

“Inclusivity is so important to me, on a personal and professional level,” Crawford said. “This paper is about the importance of making journalism more inclusive, and the fact that it’s been recognized by the AEJMC means that others in my field value inclusivity as much as I do.”

His paper, “Public relations, cultural diversity, and nation branding: Balancing regional and local identities in the promotion of Latin America abroad,” explores how the international representation of a country’s brand — such the graphics, logos and types of discourses used to promote tourism, exports and foreign direct investment — are developed within the country.

“What happens when there is disagreement on the types of identities that should define a country’s branding efforts? Or when the messages portrayed through nation branding campaigns do not match the internal realities of that country? Those are the types of questions that this research proposes,” said Miño, now an assistant professor of public relations at Boston University’s College of Communication.

"Regulating facial recognition technology and the First Amendment" was chosen as the top faculty paper in the Law and Policy Division.

The paper examines how states and municipalities have regulated the use of facial recognition technology by both government and private actors. The paper also looks at how the First Amendment and prior Supreme Court decisions may serve as a limitation on the regulation of FRT.

“Essentially, our paper suggests that the First Amendment may make it more difficult to impose meaningful restrictions on how FRT is deployed,” Ringel said. The paper was derived from Ringel’s master’s thesis, inspired by events during the summer of 2019 when bipartisan momentum around federal regulation of FRT stalled as the issue quickly became partisan.

In the aftermath of that inaction, Ringel and Reid became interested in the small number of FRT regulations that do exist at the state and local level. While they were working on the paper, a private FRT company called Clearview AI was involved in litigation in state and federal court around its technology. Clearview AI argued that the First Amendment meant that states could not limit the use of their FRT program, which got Ringel and Reid interested in the potential implications of that argument.

Recent master’s graduate Isabela Palmieri ’22 also teamed with Reid on a paper about the implications of copyright law on online shareability. The paper, “Copyright’s threat to shareability: A contractual solution via platforms’ user agreement to favor free embedding,” won second-place faculty paper in the Law and Policy Division.

“This paper is a continuation of my thesis research and Dr. Reid’s guidance,” Palmieri said. “The inspiration for this paper and the underlying thesis arose from my interest in intellectual property and its relationship to online sharing behaviors. Copyright law in the context of embedding has recently been litigated in the federal district courts, with some courts concluding embedding may violate copyright. However, social media platforms are facilitating embedding through their application programming interface. This paper explores the effect of those tensions and provides a solution.”

Reid noted the honor of working with her students on two award-winning papers. “I’m excited to produce timely and interesting research with my graduate students,” Reid said. “And I’m humbled that these works were awarded top marks by my peers at AEJMC.”

Teresa Tackett ’22 (Ph.D.) won top student paper in the Advertising Division for “It's a man’s world: Examining gender bias in the advertising industry.” Tackett is now an assistant professor of advertising at the University of Alabama.

The paper examines the ways women negotiate their career paths to a creative leadership position while working in male-dominated creative departments at advertising agencies. Tackett examined the challenges the women faced and how they made sense of those challenges during their tenure at agencies where they ultimately earned the creative director title.

“I worked in the advertising and public relations field for nearly a decade before earning my Ph.D. from UNC. In my advertising roles, I worked specifically in creative departments, and I was always fascinated to see the gendered differences among leadership depending on which area of the agency I worked,” Tackett said. That personal experience led her to dig deeper into the issue, discovering that only 3% of women held the title of creative director in 2012, and that number had only increased to 11% in 2021.

Tackett said she hopes that sharing this research on a broad scale will draw more attention to an issue plaguing the advertising industry, so that work can be done to make creative spaces more diverse, equitable and inclusive. “Receiving this award means others realize the importance of that goal, too,” Tackett said.