UNC Hussman scholars weigh in on social platforms and Trump 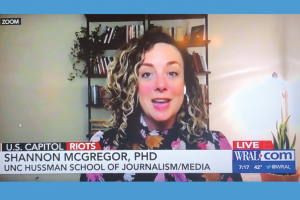 A week ago, supporters of U.S. President Donald Trump, in an attempt to overturn his defeat in the 2020 election, stormed the U.S. Capitol in a violent attack against the 117th Congress that left ransacked offices, looted halls and five dead in its wake. The violence sparked a social media reckoning, with corporations instituting responses ranging from removing content (YouTube) to permanently suspending accounts (Twitter) to removing the Parler app from play (Apple, Google and Amazon).

In the aftermath, three UNC Hussman scholars with expertise in digital political communication — Deen Freelon, Daniel Kreiss and Shannon McGregor — continue to be called on by media sources across the country to weigh in. They have provided context on-air and in print for the lightning-quick changes taking place in the social media sphere in reaction to the violent calls, either directly on social platforms or amplified there, to overtake the Capitol and disrupt the Electoral College vote count. The experts from UNC Hussman have been quoted or appeared in stories for the Associated Press, CNN Business, The Guardian, NBC Nightly News with Lester Holt, NBC’s Today Show, the New York Times (twice), the Philadelphia Inquirer, Spectrum News, WRAL News, WRAL News at 7 and WCHL Chapelboro to date. All three researchers also use digital media to get their messages into the public sphere, often using Twitter to spark academic debate or point to social science research that is relevant to today’s news.

The Guardian contacted Freelon prior to the attack for perspective on what the headline called America’s disinformation crisis.

Freelon cited research that disinformation and conspiracy theories are often deeply intertwined with racial prejudice and hatred. “It’s no accident,” Freelon said on Jan. 1, “that some of the same people suggesting COVID is a myth are also arguing that Black votes are illegitimate.”

On WCHL Chapelboro radio program “News on the Hill with Brighton McConnell” this week, Freelon reiterated that alongside social platforms, some traditional media outlets have been pushing media dis/misinformation about the results of the Presidential election as well. Asked about remedies to curtail the spread of false news, Freelon told the host, a 2019 Hussman graduate, “A lot of the regulation we’re seeing now is coming from corporate sources. I think we’ll continue to see that in light of the lack of legal remedies at the government level.”

Edgar Thomas Cato Distinguished Associate Professor Daniel Kreiss explores the impact of technological change on the public sphere and political practice. In October, he and 60 researchers including McGregor and Freelon launched a prescient set of recommendations for media covering the 2020 U.S. Presidential election — mediafordemocracy.org — which continue to be relevant long after November 3, particularly in addressing “what to do if there is a contested election…” and “what to do if there is civil unrest.”

Kreiss has long called for social platforms to consistently define, interpret and enforce their policies about political speech. He noted that the Wednesday, Jan. 6, insurrection in the nation’s capital was an event powerful enough to effect real change from platforms, who almost immediately began reinterpreting existing policies in light of internal and external pressure to take action.

“I argued that 2020 saw the emergence of platforms as ‘democratic gatekeepers’ — this will accelerate the shift,” Kreiss said when Twitter permanently suspended President Trump’s account two days after his appearance outside the White House calling on his followers to go to the Capitol building and “take back the country” by showing strength.

The social scientist has been making the argument for policy and enforcement of President Trump's tweets for some time, notably suggesting a time delay in an October piece with colleague USC Mike Ananny in Wired magazine.

The world watched as actions over the weekend and into Monday, Jan. 11 — most notably by corporate leaders at Twitter, Facebook, Instagram (owned by Facebook) and Amazon — attempted to muzzle calls for extremist violence by de-platforming accounts and shuttering unregulated apps like Parler.

Rasmus Kleis Nielsen, a colleague in the political communication academic space from the University of Oxford, reiterated Kreiss’ point and Freelon’s message about traditional media outlets by pointing out that of 29,000 false or misleading claims in the Washington Post’s fact-check database on Trump, approximately 6,800 came from interviews and news conferences, and 4,300 from Twitter.

Assistant Professor Shannon McGregor’s published work looks at how three groups – political actors, the press, and the public – use social media in regard to politics, how that social media use impacts their behavior, and how the policies and actions of social media companies in turn impact political communication on their sites.

“Twitter’s permanent suspension of Trump’s Twitter account is long overdue,” McGregor told the New York Times’ Mike Isaac and Kate Conger on Jan. 8. “This is the key de-platforming for Trump. The inability to tweet cuts off his direct access to the press — and, by extension, the public.”

In interviews on the Today Show (Jan. 8), NBC Nightly News (Jan. 9) and a longer segment on WRAL News at 7 (Jan. 11), McGregor pointed out that the connections forged on Parler in the run-up to the violent insurrection last week have likely migrated to other platforms. She said that banning apps would not be an end-all. De-platforming Trump was the right call for right now, she added, but it sets a dangerous precedent.

“I don’t think anyone thinks that it’s a good idea that a couple of tech billionaires in Silicon Valley are making decisions about what sort of speech we want to have in our public sphere,” she told WRAL’s David Crabtree.

In the midst of last week’s violence at the Capitol, other political communication scholars pointed to McGregor and Kreiss’ Oct. 30 Slate piece “Americans Are Too Worried About Political Misinformation,” which closes with “fears about misinformation have become the focus of public attention, when what we should be grappling with and addressing are deeper divides that cut to the core of the nation.”