UNC Hussman by way of the U.S. Coast Guard 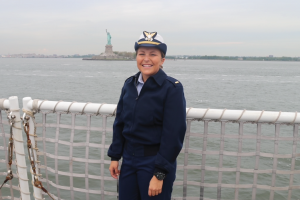 Fresh out of college, she found herself taking photos as the Haitian president and a U.S. ambassador toured Hurricane Matthew’s damage to the Caribbean country in 2016 — not exactly the “first job” scenario she’d imagined as a high school student in landlocked Pennsylvania.

But the Coast Guard has taken Corcoran many places she never thought she’d go, including UNC, where the military branch’s Advanced Education Program funds her graduate studies focusing on strategic communications.

“I knew I wanted to come to Hussman. So many of my Coast Guard colleagues had spoken so highly of the program here” said Corcoran, who’ll graduate in 2023.

Corcoran is pictured at right.

“Over the years, it’s been great to have people in our  graduate program who serve in the military,” said Associate Professor Lois Boynton. “Hearing viewpoints from those who work outside the for-profit and nonprofit realm contributes greatly to how all of us understand different approaches to effective communication or the everyday challenges of working with different stakeholders.”

Boynton serves as Corcoran’s mentor and works with her on her thesis, which explores Coast Guard recruitment communications.

The Coast Guard’s mission, which Corcoran describes as multipronged and largely humanitarian, resonated and led her to attend the United States Coast Guard Academy, where she earned an undergraduate degree in business administration in 2016. Corcoran joined the Coast Guard after graduation.

Stationed in Charleston, South Carolina, she served as a deck watch officer on the Coast Guard Cutter Hamilton. She was also assigned public relations duties. When she wasn’t helping navigate the 4,500-ton ship, she learned the ins and outs of strategic communications including media relations, content production and event planning.

“One of the great things about the Coast Guard is the way the branch empowers junior officers,” said Scott McBride ’13 (M.A.), another Coastie-turned-Hussman master’s graduate and a mentor to Corcoran. “You can be just months into service and already making these big, impactful decisions about national or even international issues. A graduate degree from Hussman adds to that real-world experience.”

The Coast Guard’s Advanced Education Program pays full salary to service members accepted at graduate schools, on the condition they return to service once they graduate. “You’re basically being paid to be a full-time student,” said McBride, who was recently promoted to deputy chief of public affairs for the Coast Guard. Before joining the Coast Guard in 2011, he served as a U.S. Navy intelligence officer.

Like Corcoran, McBride used Coast Guard funding to complete master’s studies at Hussman, and like Corcoran he was drawn to serve by the Coast Guard’s humanitarian work. “I like to say we’re the Swiss army knife of the military,” said McBride, who noted the Coast Guard’s 11 major operational missions ran the gamut from defense operations to first responder duties during natural disasters.

Both Corcoran and McBride noted the practical experience they received at Hussman that has carried through into their careers. A favorite Hussman course for Corcoran has been “MEJO 332: Public Relations Writing” with Teaching Professor Valerie Fields. Corcoran recalled the valuable experience of preparing a public relations plan for an arts nonprofit in Raleigh as part of Fields’ course.

McBride led the Coast Guard’s public affairs response during 2017’s Hurricane Harvey, mobilizing a third of the branch’s public affairs team from his temporary base in Texas. “On average, the Coast Guard recues 5,500 people annually, but during that 11-day period we rescued over 11,000 people in the Houston-Corpus Christi area, and I’m proud I was a part of that mission,” McBride said.

As for Corcoran, she looks forward to resuming her Coast Guard life after graduation. She’ll “pay back” the Coast Guard for her graduate education with at least four more years of service a as district public affairs officer — she hopes in Boston or Virginia.