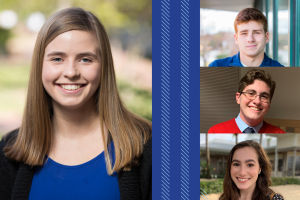 The research by Crumpler, Christian Avy ’21, Dominick Ferrara ’21 and Jamie Krantz ’21 (far right) highlights the need for consistent public health funding over time in order to be prepared for incoming emergencies like COVID-19. It also raises the question of why North Carolina and many other states across the nation don’t track local health department expenditures in a centralized and comparable way.

Data journalism involves number-crunching to uncover or provide context to news stories. In this case, the UNC Hussman students’ pulled together financial information from the 46 health departments in North Carolina that responded to their request for data. The 46 departments serve about 70% of the state’s population. Based on that available data, the team’s findings revealed that county-level spending on public health dropped 22% from 2010 to 2018 in N.C. (adjusted for inflation and population increase). 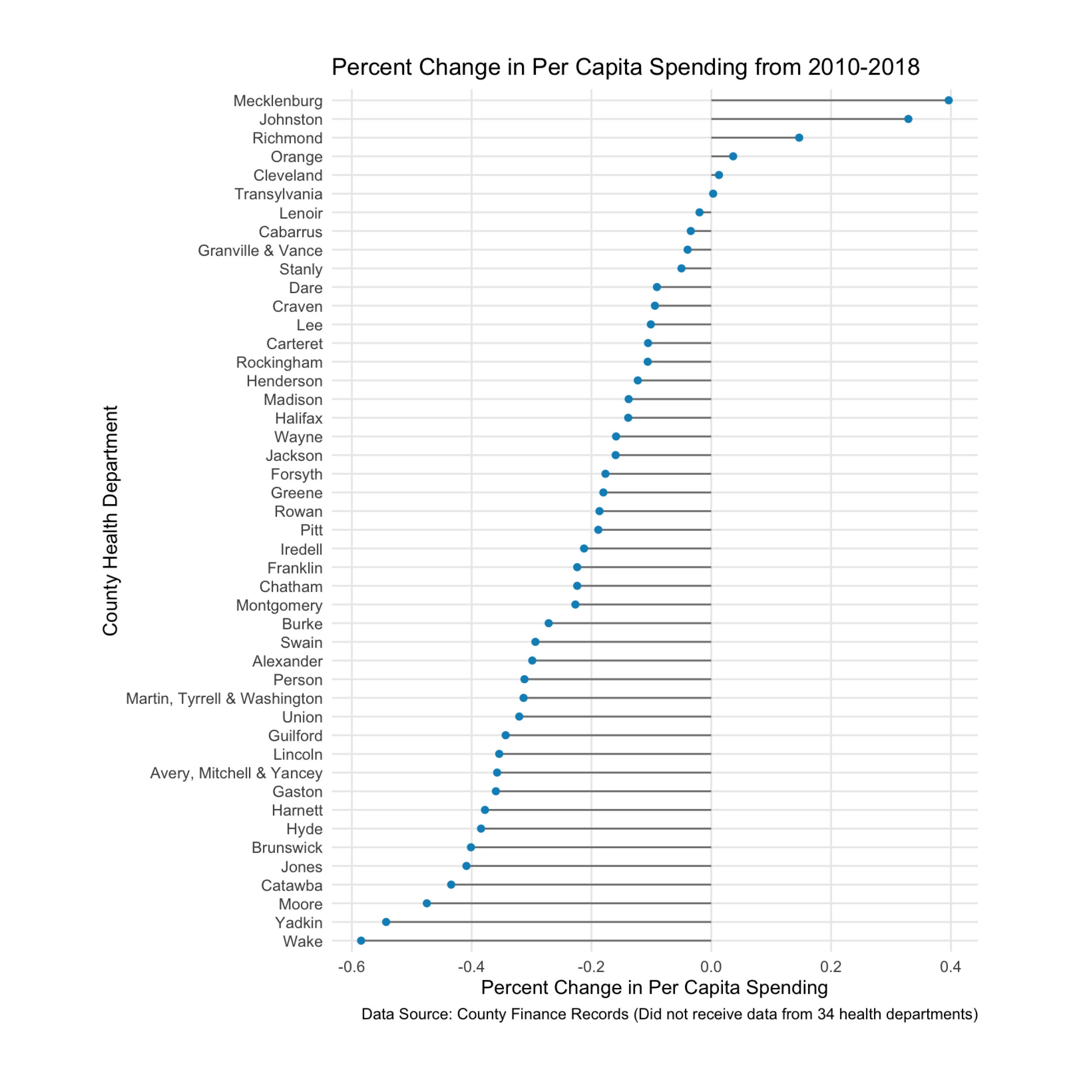 Those numbers came to life when students spoke with beleaguered health directors from across the state, who articulated the difficulties of operating on short-term emergency funding mixed with dwindling infrastructure support. Experts from UNC Gillings School of Global Public Health, the state’s Department of Health and Human Services and other sources added context to the complex story of how long-term budget cuts are one reason that frontline public health workers across the state are struggling in the face of a global pandemic.

A team of professionals from The News & Observer reviewed the students’ report. The story was sharpened and refined by Crumpler — with her Carolina professor’s guidance — over the longer-than-usual break between fall and spring semesters.

"Over break, I wanted to further step it up," Crumpler said, appreciative — as every reporter is — of some additional time to call a few more sources and think more critically about the story.

The extra work paid off.

“It’s the best piece of student journalism I’ve seen since I started teaching at Carolina,” Thornburg said. “And it was produced under a unique set of challenges due to the coronavirus. The team made public records requests of 85 different health departments by phone, then had to organize and analyze what came back over the course of a virtual semester.”

This Tuesday, the day Carolina students returned to (virtual) class, one of the largest circulation papers in the state shared the Hussman students’ story with their readers. Headlined “Underfunded for years, many NC public health departments lack resources to fight COVID” and with Rachel Crumpler’s name in the byline, the N&O story also shared the Hussman team’s raw data alongside their interactive graphics and maps. The piece will run again in the paper’s printed Sunday, January 24 edition.

Thornburg, a 1997 Hussman graduate with an M.A. in political management from George Washington University, spent a decade overseeing digital news projects in Washington D.C. for The Washington Post, Congressional Quarterly and U.S. News & World Report. He returned to teach at Carolina in 2007 and is a tenured associate professor at his first alma mater. He’s authored a textbook on online news production and co-authored a second on reaching online audiences.

“MEJO 390: Advanced Data Reporting” was offered as a fall course for the first time last semester. The two prerequisites: a reporting class, and Thornburg’s “MEJO 570: Data Driven Journalism” (the introductory course, despite the higher number) class. The introductory class routinely fills up, Thornburg relates, with interested bioinformatics, statistics and computer science students from across Carolina often struggling to find an open seat.

"I decided to take MEJO 390 because of my relationship with Ryan Thornburg,” said Avy. “I took his ‘Data Driven Journalism’ in the Fall of 2019, and really enjoyed learning from him. I wanted to take whatever the next step was for data journalism.“

“There are a lot of departments in which Carolina’s students can learn programming and quantitative thinking skills. And my advanced students even have the initiative to teach themselves new programming languages if needed,” said Thornburg. “But more importantly, good data journalists need critical thinking skills. In my classes, they learn how to think about data like it is any other source — they need to interview it, ask the right questions to yield the right answers, understand its biases and put it in context. They learn to use data to provide narrative tools like characters, setting and plot. They interview it with machines and give it meaning for humans.”

In preparation for this fall’s advanced course, Thornburg talked with nonprofit Kaiser Health News (KHN) reporters Hannah Recht and Lauren Weber about a sweeping multipart investigation on which they’d partnered with the Associated Press (AP) on in summer 2020 to examine the public health infrastructure in the U.S. The seasoned reporters were willing to share their data template with his students, and Thornburg noticed that public health information from North Carolina was missing expenditures information.

Thornburg remembers thinking, “What a great place for students to fill in the gap.”

Inspired by the KHN/AP reporting and encouraged by their professor, Crumpler and her teammates Avy, Ferrara and Krantz got to work.

“Since we were working off the Kaiser Health News data, we already had an idea that we might find the pattern of decreasing public health funding,“ said Ferrara. “But as our data started to come in from the counties, it became clear that we had something on our hands. It's always great as a reporter when you start to see that pattern, because it means you have something to work with. Of course, the story really came together because of our sources, but the feeling of knowing we were on the right track was one of elation for me.”

Data journalism is the kind of reporting that you don’t often see outside of large media outlets like The New York Times or The Los Angeles Times, or organizations like ProPublica with missions that center around producing and analyzing large data sets. It’s the kind of journalism that can take a great deal of time (read: money) to produce. And it’s the kind of news-making that can make a huge impact when done well — think data-driven investigations like the Wall Street Journal’s “Medicare Unmasked” in 2015; the Charleston Gazette-Mail’s 2017 reporting on the flood of opioids flowing into West Virginia; and ProPublica/NYTimes Magazine’s climate maps visualizing researchers’ predicted sea level rises.

Thornburg is so enthusiastic about the future of data journalism that he spent his free time developing a four-part “data reporting bootcamp” in fall of 2019 for a group of Carolina Analytics & Data Science (CADS) students at UNC who’d expressed an interest.

“We need to reach students who don't think of themselves as media people, but who want to tell stories with data,” he said.

Alternately, storytellers who don't think of themselves as "numbers" people might find data-driven sleuthing for the story rewarding as well.

“I was fascinated by the idea of hidden stories, as our professor put it,” said Krantz. “Numbers, data, and the program R scared me, but I wanted to challenge myself to tell a story in a non-traditional way to get the maximum amount of impact. I'm proud of the work we accomplished!”