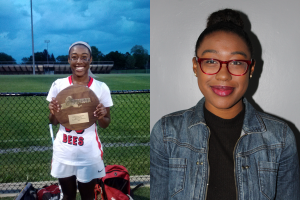 Amari Pollard, Roy H. Park Fellow master’s candidate at UNC Hussman School of Journalism and Media, knows lacrosse. She knows content creation in today’s media landscape. And she knows what it’s like to be a Black woman moving through majority white spaces.

With ESPN’s new halftime spot on the ACC Network and ESPNU’s “Sound On with Tari and Amari,” Pollard is bringing those worlds together alongside Tari Kandemiri, another Black woman with knowledge and passion for the game of lacrosse. Together, the co-hosts are bringing a unique chemistry, humor and frankness — and a new point of view — to the sport through ESPN’s national coverage.

“Their personalities are infectious,” said ESPN women’s lacrosse coverage director Ericka Galbraith in a Chris Carlson story on March 4. “The perspectives they bring to the conversation are incredible. They provide a fresh, passionate and important viewpoint that’s long overdue within our coverage. The sheer joy they exude when discussing lacrosse is captivating. It’s really, really important in growing this sport.”

Growing up on the Seneca River in New York State near Lake Ontario in the small town of Baldwinsville (pop. 7,053) — site of the 24th lock of the Erie Canal — Pollard took up the sport in the seventh grade and developed a passion and a talent for the stick-and-ball sport that originated in a tribal game played by the indigenous peoples of the Eastern Woodlands. The team sport soothed some of the isolation she felt as one of only about 70 Black residents of Baldwinsville, and gave her innate athletic talents room to flourish.

She played for the Baldwinsville Bees in high school. That led to a starting midfielder position on the Le Moyne College lacrosse team. At the private Jesuit college in Syracuse, New York,  Pollard broke some records as a sophomore and coaches anticipated seeing her name in the mix for division “Midfielder of the Year” accolades in her junior year.

“I felt very free playing lacrosse,” said Pollard, who relished being part of a collective body seeking success together, especially after an early childhood playing the more individually-oriented sport of tennis. “And I happened to be fast, which helped.”

Her lacrosse career came to a screeching halt during the first minute of her first game as a junior, when she tore her left ACL. The communications major stopped playing to focus on her writing and activism, choosing not to opt for the toll it would take on her physical and mental strength to get back to playing condition.

At the urging of her coach, she’d kept her hand in the game by writing for “Inside Lacrosse” while still in college. She continued to write for the sports media entity through her first full-time job as social media producer for syracuse.com; as a social media editor and then the first head of audience development with weekly news magazine theweek.com out of New York City; and as a graduate student at UNC-Chapel Hill, which as it happens is home to arguably the strongest women’s lacrosse team in the country.

At Carolina, Pollard navigated a year-and-a-half in lockdown when the coronavirus pandemic swept the globe following her first semester on campus. No stranger to adapting to challenging circumstances, Pollard says she used the unexpected space afforded in her schedule by the lockdown to take time to figure out where she was headed as a communicator and as a person. She’s appreciated the opportunity to work closely with professors Lucinda Austin and advisor Lois Boynton on that journey.

Her thesis project takes a research-oriented look at how Black creators can utilize online relationship-building to create community and dispel stereotypes. “The So-Called Oreos Podcast,” a project she originally developed with three friends who also identified as being labelled “Black on the outside and white on the inside,” has become her experimental laboratory of sorts for that research. The podcast, which streams on Apple Podcasts, Soundcloud and Spotify, reaches listeners from around the country and globe. The group’s robust Instagram account has had nearly 2 million Reel views and averages 1,198 post impressions, according to the So-Called Oreos’ Oct. 2020 media kit.

“The podcast is a side hustle that we would love one day to be the main hustle,” said Pollard, defining the level of passion and commitment that she and friends Janae and Kia have for the work that they’re doing in the podcast space and the community of people that it represents.

Last summer, when Pollard participated in several discussions with leaders throughout the lacrosse world about her experience as a Black women’s lacrosse player, decision-makers at ESPN, the sports media entity owned by The Walt Disney Company and Hearst Communications, took notice. Her ability to communicate her own sense of isolation at the sport’s lack of diversity while at the same time relishing the sport and the positive lessons she’d learned from lacrosse stood out. ESPN producers approached Pollard with the idea of she and Kandemiri becoming co-hosts of a regular taped halftime feature for women’s lacrosse games. Tari and Amari made their debut on national television on February 21, 2021, during a game between Virginia Tech and Duke and have delighted audiences at every women’s lacrosse game broadcast since.

“We discuss important and exciting stories happening within women’s lacrosse,” said Pollard. “Tari and I really have fun taping. And I think people have fun watching us,” she said, describing the show as two girlfriends — who happen to like lacrosse — talking about stuff.

Curious? Tune in on Saturday, March 27, at 5 p.m. when “Sound On with Tari and Amari” is broadcast to women’s lacrosse fans across the country during the Virginia Tech vs. Syracuse game. You can also catch a rerun on Sunday, March 28 at 11 a.m. during the Louisville vs. Boston College game.