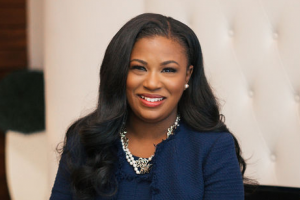 UNC Hussman Alumni Board member LaToya Evans ’08 empathizes with students graduating into an uncertain world and tough economic times this spring. She came face to face with a global financial crisis herself as a 2008 graduate. She tailored her interests to the times and carved out a stunning PR career. Evans founded boutique public relations firm LEPR in Charlotte, where she leads media and marketing initiatives for high-profile businesses, politicians and professional athletes. At LEPR, Evans brings extensive C-suite level experience directing public relations and crisis communications teams for Ally Financial, Cisco Systems, Compass Group and Bank of America. Prior senior management experience at Walmart, Philips Electronics and IBM paved the way to those executive roles. Her communications work was preceded by a thriving freelance writing business for the likes of Glamour and People magazine. In 2017, Evans served as chief communications officer to Charlotte’s Vi Lyles in her successful mayoral campaign, and continues to advise Lyles, who was re-elected in 2019. The peripatetic strategist and spokesperson recently wrapped communications roles with the U.S. presidential campaigns of both Andrew Yang and Mike Bloomberg. We spoke with Evans about the challenges faced by 2020 UNC Hussman spring graduates.

Evans came to Chapel Hill from E.E. Smith High School determined to build a successful career as a writer. Enrolled in what was then the “news-editorial” track at the J-school, she founded a society for future magazine editors on campus and began freelancing for national magazines while still an undergraduate. She hustled for internships in New York, landing one at Cosmopolitan between her freshman and sophomore years, with others at Vanity Fair and Vogue following throughout her college career. Lunch breaks were opportunities to network with editors at publications across the Big Apple. When one publication folded the day before a scheduled lunch, Evans became vividly aware that the print magazine industry was changing, and fast.

By her senior year, with the 2007–08 global financial crisis already well underway, she took the summer advice of the executive editor at her favorite magazine, who recommended that Evans take her considerable networking talents and look into PR as an alternate career path.

“I was sitting in Lois Boynton’s class,” Evans remembered the turning point. “Mary Beth Navarro ’98 (M.A.) had come to talk about working at Wachovia in PR. She made it sound exciting! I decided, ‘That's it! I‘m going to apply for some PR jobs, too.‘”

“I took a job at IBM, thinking I would do the job for a year until the recession blew over,” Evans told a Business Insider reporter last month. “It didn't just blow over and instead went on and on. But during that time, I fell in love with PR and never looked back.”

Evans is thankful for that time. As the only entry-level staffer on the experienced team, the role started with responsibilities that some would find menial. But she was determined to shine.

“I picked up the things that no one else wanted to do,” she said. ”I turned simple tasks into big things: you want me to handle the annual blood drive? Okay, I will. I'm making heart-shaped cookies, coordinating giveaways, turning it into a must-see event and pitching an increased budget for next year.”

“Give me anything, and I'm gonna make it shine!” she laughed. “But I knew that if I couldn’t do PR for the blood drive, I would have never gotten the chance to staff my first New York Times interview a year out of college. I had to work hard and show what I could do.”

By 26, Evans was earning six figures as a senior manager for the world’s largest corporation.

“In times of crisis, times are tough. But the need for public relations becomes bigger,” said Evans, who sees opportunities for communicators who can stay resilient and nimble during tough times. She is certain that her willingness to try new roles and acquire new skills helped her leap up the corporate ladder.

“Look at the completely different set of TV spots we're seeing right now during the pandemic,” she pointed out. “Companies had to pivot. Advertising and PR experts had to determine the strategy, tell the story, place the ads. That's a lot of work — and someone had to do it. Communicating well becomes even more important in times of crisis.”

She related her own experience at reinventing herself over time.

“You have to get something foolproof,” she said, ”or be willing to adopt a secondary skill set that is not in your core field.”

To this week’s graduates, she sent a message of realism, but also one of resilience.

”Know when to acknowledge the pandemic and its challenges and pivot accordingly. But also know when to ‘shake it off’ and move forward,” she said.

“Grab every opportunity, and don't get caught up in what you think is going to be menial. Take it as an opportunity. Make it shine!”