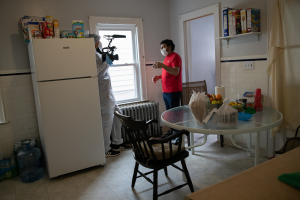 UNC Hussman School of Journalism and Media graduate Oscar Guerra ’14 (Ph.D.) wrote, produced and directed “Love, Life & the Virus,” the story of a mother in Stamford, Connecticut, struggling to survive COVID and see her newborn baby and her immigrant family again after being put on a ventilator and being put into a coma. The documentary, the first in a two-part Frontline series focusing on two immigrant families struggling with the pandemic, premieres on Tuesday, August 11.

Guerra ran the media lab at Tec de Monterrey University in Mexico City when a visit from then-Dean Richard Cole from Carolina’s journalism school changed his trajectory. Encouraged by Cole, he pursued his passion for filmmaking and education in America. At UNC-Chapel Hill, with help from faculty like Professor Rhonda Gibson, he stuck to the challenging path, finishing with a Ph.D.

We caught up with the filmmaker before a busy day of media inquiries about the PBS Frontline premiere on August 11. The Spanish language version premiered on Univision's Aqui y Ahora on Sunday, August 16 at 7 p.m. EST. The edited and abridged conversation follows.

You can watch the full Frontline episode here.

Tell us about what lead you to this point in your career.

I was a communications major at Tec de Monterrey, and received my master’s degree in marketing while converting the university’s media lab into a digital studio. Dean Cole encouraged me to continue pursuing my education, suggesting that I take my passion for filmmaking and love for teaching to the next level. He and Dr. Enrique Tamés at Tec de Monterrey were the inspiration for me to get my doctoral degree.

I had a rough start. Professor Rhonda Gibson gave me what I'd call a ‘friendly wake-up call.’ Her persistent support and then-Professor Chris Roush’s encouragement to try my hand at teaching in my second language at Carolina brought me to a personal crossroads which I was so grateful for then, and am grateful for now.

I headed down the tenure-track academic road, from Indiana University of Pennsylvania to San Francisco State University. A year ago, I accepted a position as assistant professor of the newly-formed digital film/video concentration at the University of Connecticut. My wife, Susan Wilson, a nurse at the North Carolina Jaycee Burn Center at UNC when we met, our baby daughter and I moved to Stamford from the Bay Area. Susan became a resource nurse at Stamford Hospital. My colleagues and I at UConn went to work building a university concentration. A semester later, the coronavirus pandemic hit. Susan’s work in critical care unit faced the coronavirus head-on. Our focus turned to keeping our daughter safe. And — in late April — the “Love, Life & the Virus” project began. 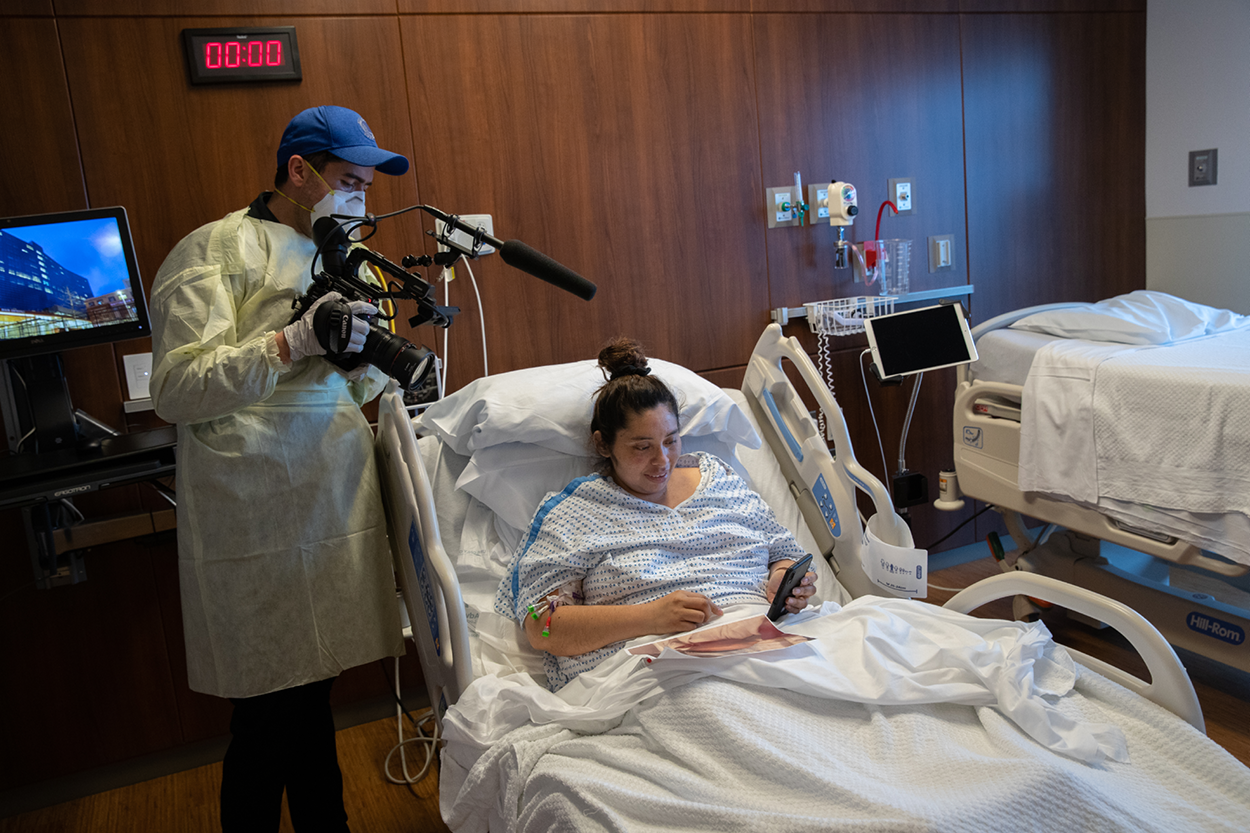 A 30-year-old mother from Guatemala named Zully who lives in Stamford. She’d been rushed to the hospital at eight months pregnant with coronavirus symptoms. Just before she was intubated and before giving birth to her 5-lb. son Neysel, Zully called her 7-year-old son’s bilingual ESL teacher at Hart Magnet Elementary. Zully asked teacher Luciana Lira to help her husband Marvin and her son Junior; and to look after the baby she was about to give birth to.

Luciana Lira, who is from Brazil originally, became a temporary guardian, caring for her student’s newborn brother while his mother recovered from an induced coma and a plasma antibody trial; and while the baby’s father and brother, who had also tested positive for CV19, were quarantined at home.

How did you come across the story of “Love, Life & the Virus?”

I came to the University of Connecticut a year ago for the opportunity to start something from scratch, to create a digital film/video concentration for the department of digital media and design at the Stamford campus 45 minutes outside of NYC. I introduced myself to Catalina Samper-Horak at Building One Community (B1C) in Stamford, an immigrant advocacy organization. At the same time, my wife — a fan of Pulitzer Prize-winning photographer John Moore, a special correspondent for Getty Images — reminded me that Moore lived in Stamford, too. After about her tenth attempt to get me to reach out to him, I messaged Moore on Instagram. I never expected a reply, but he responded about 20 minutes later!

Catalina at B1C told us about Zully’s story. John and I quickly decided to work together, and it became clear that we should be documenting her story. My wife was instrumental in getting us to the right people at Stamford Hospital. It is difficult to go to a hospital with a camera in the middle of a pandemic — it was a rigorous, month-long process to gain access to the hospital — but the director of communications at the hospital worked with us to make it happen.

When did Frontline get involved with the project?

Gabrielle Schonder, a Frontline producer, is a volunteer at B1C. She helped us reach out to the executive producer and her team at PBS Frontline. I showed them my cut and pitched the idea for a long-form televised documentary about Zully’s fight to survive CV19 and how the Stamford community came together to help.

The story had a lot of media attention. The teacher who helped the family, “Miss Lira,” is an angel, and the family has undergone such hardship. "Miss Lira” took care of the newborn while continuing to teach remotely this spring and care for her family. She would video chat with Marvin and Junior, and with the baby’s grandmother in Guatemala, so that they could have time with baby Neysel while his mother recovered.

Many other major media outlets showed an interest, but I trusted Frontline. We wanted to protect the family’s privacy and keep the integrity of the story intact. When Frontline agreed to televise this family’s story, I suddenly had a group of very talented people to work with, including executive producer Raney Aronson-Rath; managing editor Andrew Metz, senior producer Frank Koughan, and production manager Callie Wiser ’02, a fellow UNC Hussman graduate.

I’m a professor, but I became a student again over the last three months, learning from these very talented people — and we did it all remotely and online. I can’t wait to teach my students all of the things I learned from this team.

We looked over a lot of footage together, and the team assured me that we could tell this story without narration — the footage was strong enough to stand on its own. That took a lot of work. We got the transcripts together. The team helped fact-check everything. We did a lot of cutting it and reviewing it, going back and trying other angles. It’s a little tougher, but it worked out beautifully because of the expertise of the Frontline team and the strength of what John and I had documented in photographs and in the footage. It was a great effort.

Tell us more about how the coronavirus pandemic influenced your work on this film. What do our students need to know? 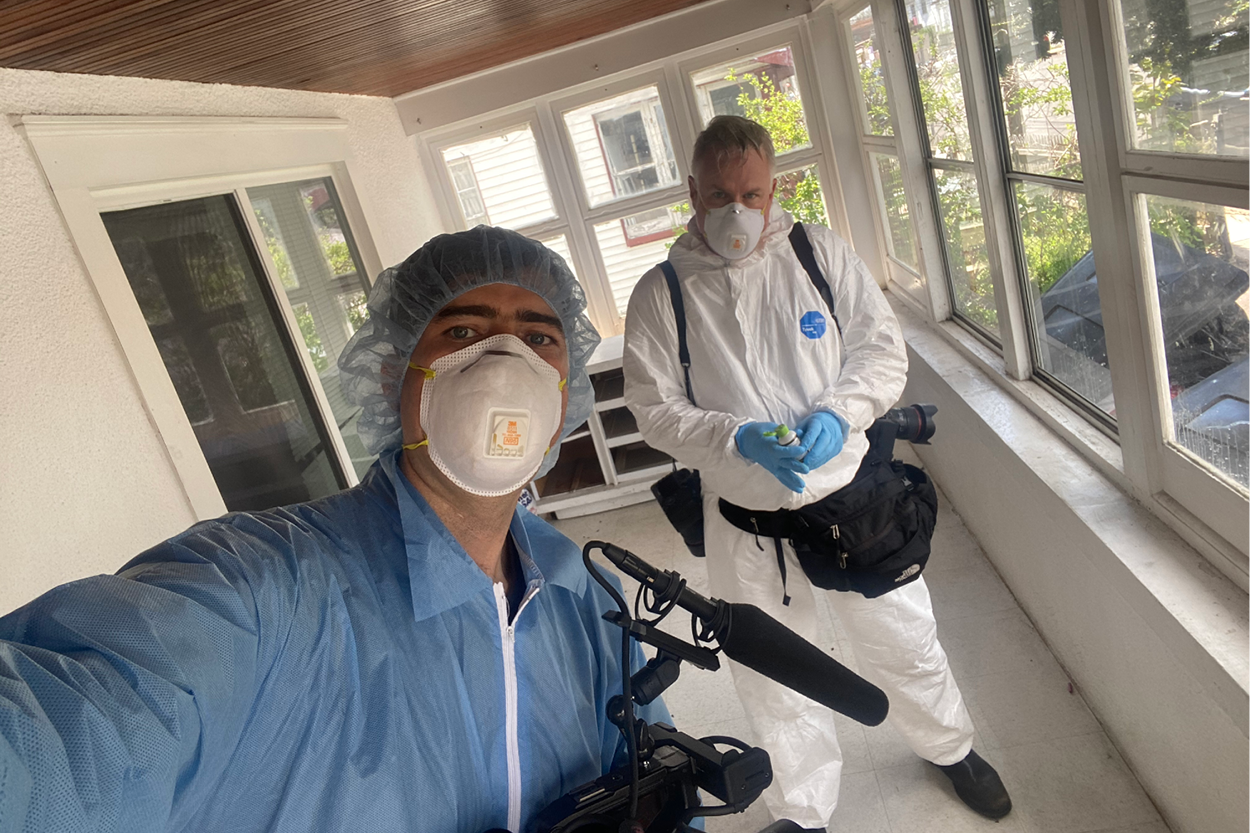 We had to be so careful, wearing protective gear and filming without disruption at the hospital and in the homes of the family and the teacher. John Moore did his thing and I did mine. As a partner and dad, I worked at night and didn’t sleep much for three months.

The pandemic has changed the way we work. It has forced a new way of relating to the participants of your story. As it turned out, I wasn’t just covering the story, I was helping out. Taking Marvin and Junior to the clinic. Translating to Spanish from English when needed. Helping them plan a surprise party for “Miss Lira.” I asked John recently, “Have you ever been this involved?” And he agreed: never.

On a normal project, you don’t do that. You try to keep your distance. But in this “new normal,” we became messengers of a sort. We had the PPE and were almost unique in that regard, we could safely go between COVID-positive environments in the hospital, and bring word back to a home which didn’t always have internet or electricity. I would go over and use my phone to relay messages back to the hospital, or John would bring a battery with me to get a smoke detector back up and running. It was a unique project.

What’s the big picture, when you step back and look at the story that you learned about four months ago and will be broadcast to the country tonight?

There is a message of hope here, for me. Even in these trying times which can bring out the worst in people, it is possible to work as one people. My new community of Stamford, Connecticut, came together and made a difference for this family. From the hospital staff to the community partners like B1C to the neighbors who contributed food, time and money: everyone made a difference. And the results can be very positive.