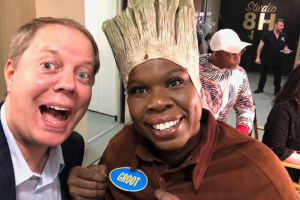 Likely the only Peabody Award-winner ever nominated for a songwriting Emmy, Saturday Night Live senior writer Bryan Tucker ’93 guesses how many Emmy nominations he’s received over the years (“13 or 14?”). There is a smile in his voice when he describes The U.E.S., a rap song about Manhattan’s Upper East Side that he and former colleague and current neighbor Leslie Jones were nominated for in 2019 (watch for Tucker’s cameo at about 2:23 in).

Tucker and Colin Jost are tied for second-longest current writer (2005) at SNL, NBC’s late-night live comedy stalwart since 1975. Tucker arrived at NBC’s Studio 8H two years after longtime cast member Kenan Thompson did. The two have worked together on sketches for fifteen seasons.

A Carolina journalism major, Tucker spent five years on the road in the 1990s with Selected Hilarity, an improv group formed at Carolina. Tucker advises would-be comedians, “One unfortunate thing you should know is, for most people, the beginning sucks.”

But Tucker credits those long days doing 500 improv shows around the country with paving the way for future success. His first year or two breaking into the comedy scene in New York also prepared him to do Emmy Award-winning writing for The Chris Rock Show. When comedians Neil Brennan and Dave Chappelle asked him to contribute ideas to their first season of Chappelle’s Show, it led to Tucker becoming third writer in that show’s second season. Tucker wrote one of the legendary sketches in comedy history, The Racial Draft, for that iconic Comedy Central series, although he attributes “80 to 90% of the comedy” that season to Brennan and Chappelle.

“Dave was at the peak of his powers then,” said Tucker, “and not yet so famous that it was getting in the way.”

Tucker went on to do Emmy, Peabody and Writers Guild of America award-winning writing for over a decade-and-a-half at SNL and counting. His favorite sketch to date was another instant comedy classic: 2016’s Black Jeopardy with Tom Hanks, hosted by Kenan Thompson.

“People on both sides of the political spectrum liked and embraced it. That is hard to do,” said Tucker. “I still try to do that, with not nearly that level of success. It’s very gratifying to me when it works.”

The comedy writer has supported dozens of UNC Hussman students directly over the years through the Tucker Family scholarship programs he and his wife Rachael — a 1996 Carolina grad — have established at Carolina.

Bryan Tucker spent time talking with us about SNL At Home (Season 45, Episode 16), the special April 11 episode produced entirely from home due to the coronavirus pandemic.

The show must go on

Longtime viewers remember SNL airing some of its most moving episodes post-disaster, including post-9/11 and post-Hurricane Sandy.

“We’ve been doing some things the same way since 1975,” said Tucker about the comfort of a vaudevillian “the show must go on” mentality. It’s a sensibility that has kept him coming back for over 15 sometimes grueling years, some of them as supervising writer and then as head writer, a position he relinquished after four-and-a-half years in favor of a slightly less taxing schedule.

“Unlike every other TV show around, SNL really feels like ‘show business’ in the best sense of the word — we’re live every week,” Tucker noted. “You can have an idea on Tuesday and see it on television that Saturday. And we have the huge staff and great resources that allow us to think big and make it happen.”

“There’s a very regimented routine at SNL,” Tucker explained when he described the pivot taken by creator/executive producer Lorne Michaels and crew to produce an entire episode from home.

A (long) week-at-a-glance, in the pre-pandemic days: Mondays to get together en masse to talk through ideas and meet the host. Tuesdays to split into groups to write sketches. Wednesday afternoon read-throughs and late-night sketch selections. And Thursday, Friday and Saturday set aside to rehearse and produce prior to the live taping at 11:30 p.m. on Saturday.

“There’s an enormous advantage to having everyone in the same building or even the same room, talking and enjoying each other,” said Tucker.

COVID-19 threw a wrench into those plans. Amidst real tragedy, at a time when two crew members and cast member Michael Che lost beloved family members to the coronavirus, the SNL At Home episode was created.

“We took it seriously and tried our best to put on a show,” said Tucker.

Everyone up to and including Michaels worked from different houses in different towns and cities, from the comedians and writers who created the sketches to the producers and editors who made the SNL At Home episode possible.

“It was weird and dissonant,” said Tucker. “There are no rules to it yet. We are still figuring it out.”

Lots of phone calls and coordination by text, phone and video chats commenced, with cast members shooting video on their mobile phones and sending it to editors who used the software from their home computers to stitch the episode together.

“Everyone was just trying to make it work,” said Tucker. “The editors really stepped it up.”

Going into the April 11 episode, Tucker predicted the Tom Hanks opening would move viewers, most of them fully aware that Hanks and his wife Rita had recently recovered from the coronavirus in Australia. A  Zoom video chat spoof also spoke to a weary nation, garnering millions of YouTube views after the show aired.

Most moving to Tucker personally was the tribute to SNL compatriot Hal Willner, SNL’s longtime music supervisor, who died on April 7 at age 64 of complications related to coronavirus. Past and present cast members shared memories and sang Lou Reed’s “Perfect Day” in Wilner’s honor. Reed later penned a tribute to Willner.

“He was a real one-of-a-kind New York guy,” said Tucker. “Hal was respected in the music industry and a very sweet man. I was pleased that we put together a super nice tribute to him.”

The tribute and other elements referencing the coronavirus pandemic brought gravity in a difficult time for comedy.

What next? Alongside SNL, Tucker is working with his old friend (from home) on a half-hour sitcom starring Kenan Thompson. Original plans called for the show to premier in August.

Looking ahead, Tucker sees a possibility that comedy may get a little less hard-edged as the coronavirus takes its course.

“It’s hard to make fun of somebody, at least right now,” he said. “People are not in the mood for mean or nasty comedy.”

He predicts that lessons learned from producing SNL At Home may open doors for people at SNL to realize that they could work from home some, especially as they develop sketches on Mondays and Tuesdays.

And he hints that future at-home episodes may be fast on Episode 16’s heels. He wraps up the conversation with “You might see another one.”