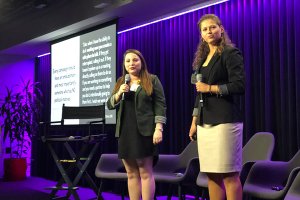 On a muggy May 10 afternoon in a well-outfitted Google DC auditorium high above Massachusetts Avenue NW in Washington, D.C., 11 undergraduates and one recent graduate — all from UNC-Chapel Hill — broke new ground when they presented “Recoding the Boys’ Club: Women vs. the Political Tech Ceiling,” the first-ever in-depth look at women’s experiences working in political technology at the presidential campaign level.

The datamining dozen, seven of whom graduated a scant three days after the launch event, unveiled a fissure in gender equity at the intersection of technology and politics: according to their analysis, only 32 percent of staffers working in digital media, tech and data analytics on presidential campaigns from 2004–16 were women. Both sides of the aisle reflected a gender gap: 65 percent of Democratic staffers and 76 percent of Republican staffers were men. In that same period, for every woman in a director's role or higher, there were three men who had held the same position. Entrepreneurship was also affected: of the 119 staffers in the data set who founded firms and organizations between 2004–16, 94 were men compared to only 25 women.

The data was simultaneously unveiled on a polished website and a readable 80-page report, which was shared by Axios reporter Alexi McCammond the next morning and noted in Poynter’s “what we are reading” list. The website, report, presentation materials, event planning and communications strategy were all produced by the team of Carolina researchers. Hussman School undergraduates Jenni Ciesielski ’19, Kate Frauenfelder ’18, Brinley Lowe ’19, Meredith Martinez ’18, Haley McDougal ’18, Gabrielle Micchia ’19, Samantha Paisley ’18, Sumner Park ’18, Abbey Rogers ’18 and Jordan Townsend ’18, and recent December graduate Emma Harrison ’17 worked alongside College of Arts and Sciences undergraduate Meredith Randolph ’18 to gather, interpret and draw conclusions from the data; and to present their material across multiple channels.

Hussman School Associate Professor Daniel Kreiss and two graduate students guided the Women in Political Technology research class as they analyzed a database of nearly one thousand presidential campaign staffers in the 2004, 2008, 2012 and 2016 election cycles; and as they interviewed 45 women from 12 different Democratic and Republican campaigns over the same time period.

“I have learned a lot in the past four months working on #ProjectRecode,” Kreiss revealed in a related tweetstorm the next day about women’s experiences in political tech.

Kreiss and Hussman School Roy H. Park Fellows Kirsten Adams (Ph.D. student) and Holly Roberts (M.A. student) accompanied the researchers to D.C., where the team presented their findings before a rapt audience of more than 100 invited communications and technology professionals and Washington insiders.

“What a fantastic way to engage undergraduate students in a world-class research project,” said George Washington University School of Media and Public Affairs Associate Professor Nikki Usher, who was in attendance. “If you are studying technology, the fact that these real gender imbalances exist is well-known. But it’s harder to document them,” she added. “The fact that this data now exists is incredibly impressive.”

The Carolina research team presented their quantitative data and followed with insights gleaned from the qualitative data they’d gathered, sharing quotes from their interviews with 45 political technology campaign professionals. Given the potentially sensitive nature of the interviews, and the likelihood that participants would address themes that affected future employment, all interview participants were granted confidentiality and information was reported using only general descriptors of roles on presidential campaigns.

“I think, within the campaign, there was sort of like this mentality that it doesn’t matter what’s going on. We have an election to win.”

A director on a Republican presidential primary campaign in 2016 explained:

“I think the way you [promote gender equity] is, for lack of a better word, sort of forming the ‘young woman's club.’ By giving each other the kinds of support that men have enjoyed since the beginning of time. I think by really being supportive of each other, giving each other opportunities, imparting as much wisdom as you possibly can to women coming into your field. I think that this is one subtle way that you start to get around this thing. I mean not everything is a revolution. Sometimes it's just doing what you can to help the other women around you.”

The Carolina team used their quantitative and qualitative data to draw conclusions about why women are underrepresented in political tech; why women who work in political tech may not be heard; and the challenges of accountability. The study’s recommendations suggested that gender disparities might be tackled over time with more deliberate hiring and promotion by campaigns; with a more inclusive environment via mentorships and strong networks; and by making a commitment to strengthening accountability in order to fight discrimination and the resulting loss of talent.

The team’s presentation was followed later in the afternoon by a frank and often empowering panel discussion led by undergraduate students Lowe and Martinez, who talked with seasoned political technology professionals Carol Davidsen of comScore; Erin Gaetz of Southpaw Content; Betsy Hoover of Higher Ground Labs and 270 Strategies; Clarke Humphrey of Bully Pulpit Interactive; and Samantha Osborne Reynolds of Advoc8. 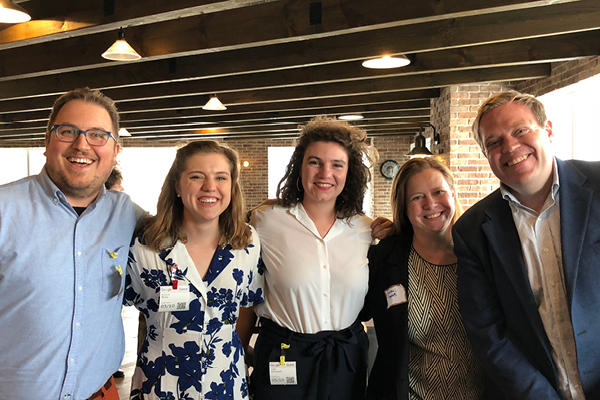 Matt Compton (far right in photo) — a 2005 Carolina graduate, 2016 deputy digital director for Hillary Clinton’s presidential campaign and the current director of advocacy & engagement at Blue State Digital — was in the audience for the presentation and panel discussion.

“That presentation was impressive,” he said. “The work that went into it and the insights they teased out of it are impressive just on the face of it. But it is also really incredible to know that the School of Media and Journalism is creating this kind of space, preparing a new generation of students in this way.”

He added, “The way we make progress on this is going to be driven in part by having information like what these students produced. It gives us a better understanding of the problem and allows us to contextualize the problem, gaining insight and empathy for the challenge.”

As Hussman School Dean Susan King noted in her forward to the “Recoding the Boys’ Club” report: “[These young women] are saying: ‘Guys, we are here to work with you. Make room. We’re ready to join forces and to innovate, all with the goal of making politics, public service and the body politic a stronger place for all citizens.’ I say: Bravo!”

Recent Hussman School alumna Jessica Porter ’17 (second from left in photo) also attended the launch event. Afterward, she wrote, “It’s remarkable that this depth and breadth of research is being done on an undergraduate level — and how current the findings are in terms of the conversations we’re having across the nation about women’s experiences in the workplace. Listening to students present their findings from ‘Recoding the Boys’ Club’ made me wish I were still in school.”

“They’ve set a new bar,” Usher added after the launch event. “At Google DC headquarters, presenting their research in the heart of the ‘Beltway,’ having it go off so well. Everyone involved can look back and be extremely proud of this victory, from the researchers and the professors leading the charge to the undergraduate students. Good job!”

The May 10 Google DC presentation was made possible by event sponsors Facebook, Microsoft and WPAi, with special thanks to Katie Harbath (Facebook), Ginny Badanes (Microsoft) and Chris Wilson (WPAi) for their support of the school and its students over the years.