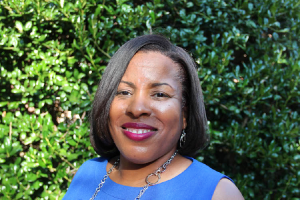 UNC Hussman’s Trevy McDonald, the Julian Scheer Term Associate Professor, has been honored by UNC for her commitment to inclusion with one of this year’s MLK Unsung Heroes awards. McDonald, who has a long history as both a beloved faculty member and mentor of students throughout the school, was honored for her work in a live-streamed ceremony on Jan. 26, 2021. McDonald has served on UNC Hussman’s Diversity and Inclusion Committee, was a longtime advisor to the Carolina Association of Black Journalists and recently was the school’s first choice to serve as its inaugural Director of Diversity, Equity and Inclusion.  Read The Well’s full story below for more on the Unsung Heroes event and why McDonald was honored, along with the School of Medicine’s Khalilah Johnson.

‘The presence of justice’

While some American progressives seem relieved at the departure of former President Donald Trump and the inauguration of President Joe Biden, Patrisse Cullors is not pausing in the fight to keep government accountable.

“Our work is not done. We just took out a fascist. Now we need to challenge a Democrat who has a really terrible history on issues like incarceration and policing,” said the co-founder of the Black Lives Matter movement in her remarks at the University’s 40th annual Martin Luther King Jr. Memorial Lecture on Jan. 26.

Biden’s early executive orders, including ending federal contracts with private prisons, are “good baby steps, but it’s not enough,” she said. “Ending private prisons, which is a good start, doesn’t really deal with the whole of who is inside prisons.”

“The Presence of Justice” was the theme for this year’s event, held virtually for the first time because of the pandemic, and Cullors’ comments echoed the spirit of the King quote: “True peace is not merely the absence of tension; it is the presence of justice.”

“We can’t get toward change by trickling toward it. Trickle-down change does not actually make real profound change,” she said.

Cullors had a hearty laugh at the Zoom audience question, “Is there anything about this moment that makes you confident that we will actually see the change that we seek?”

“No! But … ” and Cullors laughed and held her hand up in a stop signal, “that’s OK. I don’t always have to believe that the change is going to happen right now. That’s not really my job. My job is to help lay the foundation for the next generation.”

As Cullors has led many Black Lives Matter marches and put herself on the front lines with her activism, the winners of this year’s MLK Unsung Hero awards — Khalilah Johnson and Trevy McDonald — are University employees who have also taken on institutional racism. The two were recognized as part of the livestreamed event.

Johnson said she has found herself challenging racist attitudes on every front in her profession, from people of color being under-referred for the therapy they need to Black occupational therapists dealing with racist treatment from their patients.

This treatment often starts with the Black therapist not being recognized as the professional in the room. “It’s been a regular occurrence in my career. That is the stereotype — that the professional, the licensed folk are often white and that the aides and environmental service people are often folks of color,” Johnson said. What often follows is the patient’s questioning of her credentials, not something her white colleagues have to deal with.

Johnson is active in bringing more diversity in the teaching and practice of occupational therapy — a profession she describes as “80% white and female.”

Her research focuses on health service access and participation for minoritized adults with intellectual and developmental disabilities, and she recently published a journal article that is one of the first to focus on racism in occupational science. Active on social media, she promoted the article and its contents there to bring more general awareness to the topic, since “journal articles are not that accessible.”

Movements like Black Lives Matter and the minority health disparities that have become more apparent with COVID-19 have brought attention to racism in the profession over the past year, which gives her hope.

“I really am hopeful for a change in this profession,” Johnson said. “There are armies of students and faculty and friends of the profession who are dedicated to transforming how we teach our students, how we engage in practice and what we do in research.”

When the Hussman School of Journalism and Media created its first diversity, equity and inclusion position in 2020, Trevy McDonald was at the top of the list to fill it.

Her interest in diversity was what drew McDonald to the University in the first place. Visiting the master’s program in Radio, Television and Motion Pictures here in 1990 as a student at the University of Wisconsin at Oshkosh, she was impressed that Carolina had a Minorities in the Media course. “Oshkosh was not very diverse at all,” she said. “When I went to school there, the Black population was about 1%.”

When she came to Carolina, she worked straight through to earn her master’s and doctorate, becoming one of the journalism school’s youngest doctoral graduates at 25. McDonald took a break from academia to write a novel, start her own publishing company (which she still runs) and become a consultant to several writers. She spent so much time at the Chicago Borders bookstore that she was picked to introduce Nobel Prize-winning author Toni Morrison at a standing-room-only book signing.

But being a professor had been McDonald’s idea of “the coolest job in the world” since she was a college sophomore. She returned to Carolina to teach, first as a lecturer in 2008-10, becoming a tenure-track assistant professor in 2010. In 2018, she became an associate professor and the first Black woman to be tenured at Hussman. At the journalism school, she is taking on issues like recruiting and obtaining a more diverse faculty and student body while also mentoring Black students and teaching courses to raise awareness of race and gender issues.

Her courses include Diversity and Communication (taught since 2008) and the Black Press in U.S. History (since 2013).

“I’ve taught over 1,200 students through the years in Diversity and Communication — looking at dispelling myths and challenging stereotypes about marginalized groups and also developing cultural competency,” McDonald said. “I’m teaching our future — and really soon-to-be — journalists and strategic communicators.”