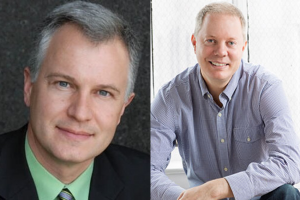 Scott Fowler ’87 (at left), a columnist for The Charlotte Observer, recently wrote about a Saturday Night Live sketch co-written by another alumnus of the UNC Hussman School of Journalism and Media — Bryan Tucker ’93 (at right).

Watch the sketch here and check out the full story below. Then, reread the UNC Hussman story profiling Tucker and SNL’s “the-show-must-go-on” attitude during COVID-19.

The uproarious “Saturday Night Live” sketch that skewered Charlotte, Hornets rookie LaMelo Ball and his proud papa LaVar Ball Saturday night went from conception to performance in 36 hours. It also left a hilarious line about LaMelo Ball and Cracker Barrel on the cutting-room floor — but don’t worry, we’ve resurrected it at the bottom of this story.

The SNL sketch everyone in Charlotte has been talking about was co-written by UNC graduate Bryan Tucker, a senior writer for the NBC comedy staple. He explained Monday in our interview how it was created, and also why it included so many inside jokes pointed directly at the Queen City.

“We were just poking light fun at Charlotte,” Tucker said, “so while we were doing it, we thought it would be more fun if we made some real local references.”

Thus came the line describing Charlotte as the “Gateway to Gastonia,” which Tucker came up with Friday afternoon while writing the show that went live Saturday night.

“I thought it would be funny for LaVar to pump up Gastonia,” Tucker said, “and I liked the alliteration.”

It was his SNL co-writer Josh Patten, who’s from Virginia, who brainstormed the idea to call Charlotte “the regional banking capital of the world.” And yes, Tucker said, the word used in that part of the sketch was “banking” and not “bacon” — although Tucker allowed that “bacon would have worked, too.”

The 3-minute, 43-second sketch aired during the Feb. 27th “Weekend Update” segment and featured longtime SNL star Kenan Thompson doing his over-the-top take on LaVar Ball, a character Thompson had already portrayed several times during the life of the show.

In real life, Ball is the father of NBA players LaMelo and Lonzo Ball and is a former Carolina Panther practice-squadder known for making outlandish comments, like saying he could have beaten Michael Jordan in 1-on-1 despite never playing in the NBA himself.

Tucker is a 1993 UNC graduate and an enormous Tar Heel fan who recently bought a house in Chapel Hill with his wife, who’s also a UNC grad. They have deep N.C. roots and lived in Durham with Tucker’s in-laws for three months during the height of COVID-19 in New York in 2020.

Tucker has written numerous sketches for Thompson over the years at “SNL.” The two men have worked together on the show for the past 16 seasons, with Tucker almost always behind the scenes and Thompson in front of the camera.

CHARLOTTE AS ‘THE MOST STORIED FRANCHISE IN BASKETBALL’

Tucker said he and Thompson had been thinking for a while about doing another LaVar Ball “feature,” as the monologues on “Weekend Update” are actually known. They were just trying to find the right week. And with the NBA season in full swing and LaMelo Ball playing so well for the Hornets— he’s the heavy favorite to be the NBA’s Rookie of the Year — they decided this was the week.

But what to write?

Said Tucker: “We know that LaVar shines most brightly when he’s kind of talking grandiosely about something that’s kind of mundane — like a hotel breakfast bar. Or playing in Serbia. Something like that, but treating it like it’s the greatest thing ever. So we thought about it. And you know, I love Charlotte and I love the Hornets. But wouldn’t it be funny to talk about Charlotte like it was this mecca of NBA basketball?”

That thought turned into the line, delivered by Thompson as LaVar, when he raised his arms and proclaimed LaMelo was playing for “the most storied franchise in basketball — the Charlotte Hornets!” It was so funny in part because the Hornets aren’t storied at all, having long been considered a mid-market NBA outpost that has never come close to a title.

“The regional banking capital of the world!” Thompson-as-LaVar continued, drumming up Charlotte’s virtues. “Gateway to Gastonia! No mountains, no oceans, but enough humidity to make your (private parts) as sticky as taffy!”

In show business, where movies often are filmed years before they are released, SNL is an entertainment anomaly for how quickly it gets things done. This, according to Tucker, was how the sketch went from being written on Friday afternoon to being performed on Saturday night.

Thompson is filming “Kenan” in Los Angeles, so he works there Monday to Friday each week. He and Tucker communicate during the week, with Tucker working mostly from his apartment in New York City.

It was only on Thursday night, Tucker said, that he got the go-ahead from SNL and Thompson to write the LaVar Ball sketch. So on Friday, he and Patten — who usually tag-team all LaVar Ball/Kenan Thompson monologues and also write frequently for other parts of the show — began working on a script.

Part of what they brainstormed was for LaVar Ball to promote a new all-chocolate shoe called “The Caramelo,” one that would retail for $2,000.

“At least for the last few LaVars,” Tucker said, “he’s always promoting something. One time we had him with a sneaker that could cook chicken wings. This time we wanted a chocolate shoe.”

The problem was they had no such shoe, so the SNL props department was called in to work some magic.

By Saturday, the “Caramelo” had been fashioned out of a chocolate mold, although it wasn’t edible. Thompson suggested that he take a bite out of the shoe at the end of the sketch for one more laugh.

“We said, ‘Oh no, you can’t do that,’ ” Tucker said, so instead Thompson just pantomimed licking the caramel that filled the inside of the shoe.

By Friday night, the “LaVar Ball” script was finished, with Thompson reading the script and offering tweaks here and there. Thompson got on a flight from Los Angeles to New York to come to SNL and catch up on what he had missed. “Kenan is a workhorse and always has been,” Tucker said.

On Saturday, Thompson arrived at the studio where the show was filmed, not only practicing the LaVar Ball monologue but also learning his parts in several other sketches.

Thompson performed the sketch for the first time before a live audience from 8-10 p.m — SNL’s famed dress rehearsal. Most of the jokes stayed. But a couple did not, including one about LaMelo and Cracker Barrel.

Too bad, because it was a good joke. Tucker explained that he and Patten had been trying to think of a funny setting where LaMelo would be recognized in the Charlotte area and they came up with these lines, which were only said in dress rehearsal.

“LaMelo has set Charlotte on fire!” Thompson-as-LaVar thundered. “He’s got his own private booth at the Cracker Barrel off of I-85! They don’t even make him wait in that weird lobby with all the wooden toys and candies! Never with the candy. Never with the butterscotch!”

“The Cracker Barrel stuff did fine,” Tucker said, “but the audience laughed at some of the other stuff more, so we tightened it a little.”

In the meantime, a line about the chocolate shoe also being outfitted with Alexa was added in the final minutes.

All of that tinkering resulted was made-on-the-fly comedy gold, an SNL sketch that will be long remembered in Charlotte — the Gateway to Gastonia.