Daniel Riffe retires with a powerful legacy of research and teaching that earned him the prestigious Paul J. Deutschmann Award this year 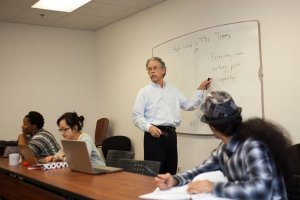 Daniel Riffe was born in the coal fields of West Virginia, and although his family no longer worked in the mines — his father refused after watching his own father die of black lung disease — Riffe never forgot the working-class communities that forged him.

He never forgot their struggles.

He has remembered them in a journalism research career that’s spanned four decades and led to a recent honor with one of the highest awards in the field, the Paul J. Deutschmann Award for Excellence in Research, which he received in 2020.

As he retires from the UNC Hussman School of Journalism and Media in December, Riffe leaves a legacy of award-winning research, dedicated teaching and committed mentorship.

The prestigious award Deutschmann Award, bestowed by the Association for Education in Journalism and Mass Communication, recognizes a body of significant research over the course of an individual’s career, which for Riffe has often meant projects that focus on the role of news coverage in marginalized communities.

“To be given the highest award in our field for a lifetime contribution to research feels unimaginable, indescribable,” said Riffe, the Richard Cole Eminent Professor at the UNC Hussman since 2008. “Just to be nominated to be in the same category as the other recipients was such an honor.”

Riffe also served as editor of Journalism & Mass Communication Quarterly for 14 years and has been recognized previously by AEJMC with its Eleanor Blum Distinguished Service to Research Award and has received a campus-wide award for his work mentoring graduate students. He has also been recognized with teaching awards at UNC and elsewhere.

Through it all, he’s been driven by a curious, meticulous nature and an optimistic belief in journalism’s civic value.

“I’ve always wanted to figure out how well people know the world around them,” Riffe said. “It is the role of the media to perform that function for the people.”

The role is critically important in marginalized communities and a favorite early project of Riffe’s, which he conducted while teaching at Ohio University, involved the study of how well local media helped residents of highly polluted Appalachian counties understand the surrounding environmental dangers. Similarly, in terms of examining Americans’ broader “window on the world,” a favorite project at UNC Hussman involved the examination with three doctoral students of 50 years of The New York Times’ coverage for insights into the storied newspaper’s changing international perspective.

“Sixty percent of news media can trace what they carry to the influence of The New York Times,” Riffe said. “A 50-year data set is an amazing resource we’ve been able to put together.”

Riffe came to Hussman in 2008, after stints at Ohio University as well as Alabama and Southern Illinois University.

“I came down for an interview, and I fell in love with Chapel Hill,” Riffe said. “This is probably considered the best journalism school in the country, and this was the place to aspire to be.”

At Ohio University, Riffe taught at the E.W. Scripps School of Journalism, where he was a Presidential Research Scholar in the social and behavioral sciences — serving as interim director and later as associate director for graduate studies and research, and director of the Bush Research Center.

A former colleague at Ohio University remembers Riffe’s passion for teaching and research. “Dan Riffe is very generous when it comes to collaborating with students and junior colleagues,” said Bill Reader, a professor at the Scripps School. “I doubt it would be easy to tally all of the graduate students and tenure-seeking colleagues who benefited from Dan’s interest in helping to launch and build the research careers of others.”

For Riffe, the teaching bug bit early. He still remembers the instructors who inspired him — a middle school composition teacher, a high school English teacher, a university professor who specialized in analyzing modern drama. They all instilled in him a long-lasting love of language and a respect for good writing.

“When you’re passionate about the material, it can come through to all the students in the room,” Riffe said. “There’s such a power in teaching.”

Hussman doctoral student and Roy H. Park Fellow Deborah Dwyer said she feels fortunate Riffe serves as her advisor. “He tells it like it is. He’s a straight shooter — that’s the sort of feedback we need as graduate students,” Dwyer said. “He has equipped me to confidently go out and conduct studies, because I know I’ve been trained by the best.”

At Hussman, Riffe not only teaches doctoral-level courses like seminars in research methodology, but also undergrad basics like “MEJO 153: Writing and Reporting.”

“Dan is one of the most generous scholars in the school. He has tirelessly promoted the research culture at UNC Hussman, trained generations of students, and is always quick with a reference and advice,” said Daniel Kreiss, an associate professor at Hussman and director of the school’s doctoral program.

“His door is always open, the conversation is always insightful, and he always leaves us inspired.”

And it’s this inspiration, this legacy that fuels Riffe’s work more than any formal recognition.

For him, the true award is giving back — and giving to — the next generation of journalism researchers and teachers and trying to make sure that all people, even the most vulnerable among us, know what they need to know in order to live good and prosperous lives.

Riffe will always be that optimistic Appalachian kid who believes whole-heartedly in the basic good of journalism — and who gets excited every day about sharing that power with others.