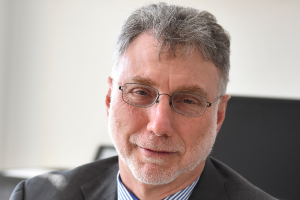 To be a good journalist, Washington Post Executive Editor Martin “Marty” Baron told a UNC Hussman audience yesterday, you need both a soul and a spine. A soul to undertake and feel a deep commitment to the pursuit of truth. And a spine to withstand the most vicious attacks.

Baron, the executive editor since 2013 of the soon-to-be 900-person strong newsroom at The Post who previously helmed The Boston Globe and The Miami Herald newspapers, articulated many of the conflicts inherent in journalism today. He steadfastly advocated fighting back with renewed conviction in an era when the idea of an independent press “is eroding today, in large part because of the unrelenting attacks of the President of the United States,” while he called out critics from the left who decry The Post’s reporters as captives of corporate America.

The tools Baron expects his reporters have in their arsenal include the ability to approach the work with an open mind; listen generously; think independently; and bring context and perspective to deeply researched stories — with the sharp point being to find the truth.

Baron detailed the attacks from the right and the left on the paper, including threats which he said have required him to provide additional security and safety measures for his staff, and acknowledged the deep mistrust for the media evident in the American public today.

His lecture, archived here (unabridged), set today’s polarized politics and low level of public trust for the media into context, highlighting how American newspaper reporters over time — from The New York Times, to McClatchy, to each of the papers that he has steered — have held power accountable by exposing lies and revealing truths, often in the face of critics who viewed them with suspicion and condemnation.

“Seeking the truth may be unpopular,” he said. “That doesn’t mean we’re failing in our work. It may mean we are doing our job and doing it well.”

Dean King recognized Baron for a strong speech full of historic context, including experiences from the rewarding life in journalism he has built for himself over the past 44 years. She introduced four students to the crowd. The foursome collaborated beforehand using GroupMe and a team Google doc to prepare questions representative of what is on the minds of Hussman students.

Ruth Samuel ’21, the daughter of Nigerian immigrants and a Morehead Cain scholar who acts as social media editor for the Carolina Association of Black Journalists, started off with a question about avoiding “bothsideism.” Baron replied that he prefers the word “fairness” over the word “balance” in the newsroom.

Samuel followed up with a reference to a recent Nieman Lab story on diversity in The Washington Post’s newsroom. She noted afterwards that Baron’s reply left her eager to ask more about the barometer for better in the phrase “doing better than most newsrooms.”

John Ratkowiak ’23, an Ad/PR major who originally entered Carolina’s neuroscience program, wanted to know more about the public’s mistrust in media; and The Post’s deft use of untraditional reporting methods to describe the impact of back-to-back mass shootings. The Zoom technology inherent in studying and working during the coronavirus pandemic added a humanizing element to the experience of meeting the de-facto dean of journalism, Ratkowiak found.

“We had a brief meeting yesterday,” he detailed, “and there was Marty, in a virtual format just like we were, from our bedrooms at home. He was in his house, probably at the desk he works at all day, and you could almost imagine yourself in his shoes.”

“His closing remarks were music to my ears,” the sophomore added, noting that the kind of interactive media he is learning about this semester at Hussman, as exemplified by The Post’s recent Pulitzer Prize-winning story on climate change, is how he envisions using the coding and HTML and CSS skills he’s learning to push the bounds of traditional storytelling to illuminate the truth for the public.

First-year Carolina student Mary Slade McKee talked about her MEJO 101 readings on objectivity and mentioned class discussions about whether the concept was outdated, which inspired Baron to review Walter Lippman’s 100-year-old “Liberty and the News” tenants on objectivity in reporting.

“Objectivity doesn’t mean everything is 50/50 regardless of facts,” said Baron. “That’s not the concept.” He said that objectivity was being falsely portrayed by people assailing the concept, and that journalists need objectivity today. His point was debated by Samuel, who argued that for marginalized and underrepresented journalists, objectivity has been a weaponized term.

From first-year Carolina student Sophia Fanning’s questions about covering the upcoming Presidential election and the impact of Amazon founder Jeff Bezos’ ownership; to audience questions about social media’s effects on the pursuit of truth and how to seek mental and physical health while covering traumatic stories, the Hussman community posed probing of-the-moment questions to the multiple Pulitzer Prize-winner who graduated from Lehigh University in 1976 with B.A. and M.B.A. degrees and was inducted into the American Academy of Arts and Sciences in 2012.

Students reported that it was an honor to speak to a media leader of Baron’s stature — and that they breathed a collective sigh of relief when the lecture ended without a technological hitch, and with a forthrightness that illuminated the challenges of running a world class newsroom.

“No one has succeeded like he has in guiding important journalism,” said Drescher, attributing a focus on deeply-held journalistic integrity that earns Baron the deep respect of his staff, and an enthusiasm for innovation that encourages experiments like the illustrated Mueller Report recently produced by the paper.

Reflecting on the opportunity provided to today’s Hussman students, Drescher recounted one of his own treasured Carolina J-school experiences, a circa 1982 luncheon for a small number of students with journalist David Halberstam, whose legendary Vietnam War coverage won him a Pulitzer. The alum has since “paid it back” with an ongoing Drescher Reporting Fellowship that promotes diversity in the newsroom by supporting summer internships at both The News & Observer and eventually (post-pandemic), at The Post as well.

“A hallmark of Marty’s supervision and journalism is that he is incredibly thorough,’” said WRAL Opinion Editor Seth Effron, another Carolina graduate in the audience, who hosted Baron before a group of journalists in Raleigh when the film “Spotlight” —starring Liev Schreiber as Baron — premiered at the Rialto Theater there in 2015. “Marty brings a wide vision of covering stories to his work, and his people share his thoroughness and his vision.”

“The Nieman Foundation gives out a Taylor Family Award for Fairness in Journalism every year, and it went to The Globe for their coverage of the Catholic Church sexual-abuse scandal in 2003,” said Effron, who met Baron when the former was working at the Nieman Foundation at Harvard and the latter was running The Globe. Effron noted Baron’s role in assuring The Globe’s reporting of a highly controversial and emotional subject was remarkable for its fairness in reaching out and giving voice to all involved in the matter.

“IF JOURNALISM IS YOUR PASSION, YOU SHOULD GO INTO IT”

“Don’t you want to be a lawyer like all your friends?” Baron remembered his mother asking him some years into his journalism career. He used the anecdote to implore students not to heed parental concerns about going into journalism.

“If journalism is your passion, you should go into it,” he advised. “It’s changing dramatically. That can be terrifying to people, but it also should make you aware that there are lots of new opportunities.”

Baron reiterated that storytelling in general is changing dramatically, and added that UNC Hussman is doing a great job of adapting to that.

“That’s why we hire so many people from UNC at The Post,” Baron said. ”You’re not only teaching the traditional values, but teaching the new ways that stories are being told.”

And UNC Hussman students are passionate about learning. Post-event and after sharing details of what she called a once-in-a-lifetime opportunity to talk with someone of Baron's stature, Samuel left to go do homework.