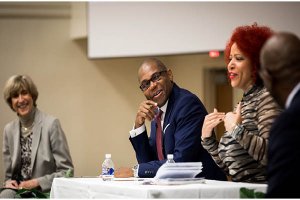 The UNC Hussman School of Journalism and Media hosted a remarkable event Saturday, Nov. 16, launching its partnership with the Ida B. Wells Society for Investigative Reporting. The program featured the society’s co-founders Nikole Hannah-Jones ’03 (M.A.), domestic correspondent at The New York Times Magazine and creator of The 1619 Project, and Ron Nixon, international investigations editor at the Associated Press. UNC Hussman Dean Susan King hosted the event with Calvin Hall, department chair and associate professor in the Department of Mass Communication at North Carolina Central University. The third co-founder, ProPublica reporter Topher Sanders, sent in a video greeting from a current investigative reporting trip in Mexico.

Carroll Hall’s auditorium was packed with UNC students, faculty, staff, alumni and journalism students and administrators from several N.C. universities. Howard University students drove from Washington, D.C. to attend. A group of high school students from Carrboro came 30 minutes early to ensure seats near the front of the room. The audience hung on the speakers’ words for nearly two hours.

“It’s a powerful launch of a strong partnership with a critical mission,” said King. “We are grateful for the opportunity to work with the Ida B. Wells Society – creating a pipeline to industry and sharing with students the wisdom of respected investigative journalists like Nikole Hannah-Jones, Ron Nixon and Topher Sanders.”

Here are some of the words of purpose and advice that emerged from the inspirational event.

“Take away the excuse”

Hannah-Jones, Nixon and Sanders founded the society to prioritize diversity in investigative reporting. It has raised more than $1 million to hold workshops and create fellowships across the country.

Nixon and Hannah-Jones told the story of coming up with the idea for the society at an investigative reporters’ conference where there were very few reporters of color attending. They said their aim is to overcome one of the most common excuses often used by leaders of institutions during the hiring process: that they would hire reporters of color but cannot find qualified candidates. Hannah-Jones said one of the missions of the society is to “take away the excuse” by giving young journalists of color the tools and mentorship needed to be fully prepared for investigative reporting.

Nixon, Hall and Hannah-Jones all outlined key interviewing and sourcing techniques to help journalists to back up their reporting and most effectively uncover stories. As Hussman alumnus and CNN Digital Senior Editor Sharif Durhams ’99 said, so many came to support the Ida B. Wells Society’s move to the South because the program is “so needed in the industry.”

Nixon, who oversees reporters in London, Cairo, New Delhi, Shanghai and Washington, D.C., discussed the importance of not just getting reporters of color in the room, but giving them decision-making roles and the power to decide what is newsworthy. He said his journey was helped by important mentors who helped him develop reporting tools. One such mentor, Barry Yeoman, was in attendance and wrote on Twitter, “I remember when Ron was a young journalist in Durham, and I am so moved to see him paying it forward.”

“The power to make a difference and move people with words”

Questions from young people in the audience revealed some of the struggles they had already faced in their professional reporting projects such as projects that they felt hadn’t received the attention they deserved and how to protect themselves from accusations of bias from readers or bosses.

Hannah-Jones and Nixon left the students with an inspiring message of their own power and self-worth. Hannah-Jones spoke about the setbacks she had faced throughout her career, even revealing that she thought of leaving journalism earlier in her career. She said she had faced editors who had tried to nudge her off the path of reporting on race and inequality.

“Their ambition for me was much smaller than my ambition for myself,” she told the audience, and she found her own path. Nixon urged them to find strength in their own talents, saying that he had learned to put aside concerns about how his audience might receive his work. “The power to make a difference and to move people with words is what keeps me going,” he said.

“Only you can control how excellent you are,” said Hannah-Jones, suggesting that every young reporter has the chance to shape their own story.

“The point of going into journalism is to hold power accountable”

Hannah-Jones’ groundbreaking The 1619 Project, for The New York Times Magazine, which Nixon called “a watershed moment in journalism,” was a frequent theme in the discussion. Multiple audience members asked for the microphone to tell Hannah-Jones about how the project had changed their lives. One teacher told the group that it had transformed the way she taught students in all her classes, from history to gender studies. Hannah-Jones described how the project came about, noting that she’d been thinking about the date 1619 (the beginning of American slavery) for all of her adult life. She called the project an "intentional reframing of history" aiming to illustrate how U.S. history began in 1619, not 1776.

Hannah-Jones counseled one passionate student from North Carolina A&T University who discussed her own multi-part project and the frustration of publicizing it. She warned that for reporters of color, the path would be hard and grinding, but urged them to keep trying, keep reporting new stories and keep pushing.

She said that reporters must just keep asking themselves: “Are you curious? Are you skeptical? Do things not make sense?”  Nixon talked about the importance of sticking to journalistic ethics and urged students to develop the tools to treat their stories and sources fairly.

“The point of going into journalism is to hold power accountable,” said Hannah-Jones after hearing from high school students in the audience who were reporting on racism in their high school. She praised and encouraged the students to forge ahead and do just that.

“Energized my spirit in ways I was not prepared for”

The event’s focus never left the most important audience — students. Hannah-Jones spoke about the transformative power of a Carolina education, saying that being a Park Fellow at UNC Hussman was “the best thing that ever happened to me in my life.” Students in the audience were inspired by her journey and the society’s arrival at Hussman.

“I was a fan of Nikole Hannah-Jones' before applying to Hussman and accepting a Park Fellowship,” said Park Fellow Amari Dawn Pollard. “So it was surreal to hear from such an established writer now having a full understanding of her educational background and the UNC link we share. Being in the thick of school, it's sometimes hard to see beyond the moment and look ahead to what can become of your career. Listening to Hannah-Jones speak on Saturday energized my spirit in ways I was not prepared for, and it reminded me of all the reasons why I wanted to attend grad school in the first place: To feed my curiosity and discover ways to help create more spaces for Black voices.”

“I just want to learn about her journey,” said Samaria Parker ’21, a journalism student from Raleigh who hopes to produce news for television someday.” First year student Paris Geolas ‘23, who brought her journalist mother, Mary Miller, said she came “to figure out how to find and deliver news in the most ethical way possible.”

By the end of the event, the Carolina community in the room was bound together in hope and purpose. As Dean King said, “this is only the launch” and UNC Hussman will see many more such moments from this exciting partnership.

The Ida B. Wells Society for Investigative Reporting is looking for a Director. Find out more here.