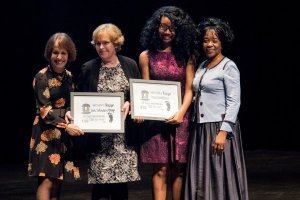 This month, one of the most universally beloved members of the UNC community is retiring after serving UNC Hussman, Carolina students and Chapel Hill for more than 40 years. Jan Johnson Yopp '70 is retiring effective Feb. 1 from her posts as a faculty member at UNC Hussman and dean of the UNC Summer School. She will be missed by everyone in Carroll Hall and on the UNC campus.

“Jan is a leader with every bone of her body.  If there is a need within the school, she fills it.  If there is a question about our values, she is able to articulate them clearly,” said Susan King, dean of UNC Hussman. “Jan doesn’t talk about what needs to be done, she makes it happen. That kind of a leader is hard to find. That’s why her departure from the school and the University is such a big moment. She is not easily replaced.”

Yopp graduated from the journalism school in 1970, continuing her studies with a master’s degree in communication from the University of Florida. Afterwards, she worked in a range of journalism and media jobs — as a reporter, covering local governments, medical news and prisons; as assistant city editor for The Raleigh (N.C.) Times; as public relations director for a Durham advertising agency; and even as a weekly columnist witing, "Life with Kids," for the Herald-Sun in Durham, N.C., for three years.

But Yopp’s calling was always at Carolina. She returned to UNC-Chapel Hill in 1977 as a lecturer at the journalism school, moving into the tenure track for professional faculty in the early 1990s. Yopp taught news writing, reporting and public relations writing. “Jan was new to UNC when she was my news and feature writing professor. Quite rigorous, my learnings from her were invaluable,” Debra Pickrel ’80 said. “I am so grateful to her.”

In 1995, Yopp received the David Brinkley Teaching-Excellence Award and a Favorite Faculty Award from the Class of 1995 and the University's General Alumni Association. She was the Walter Hussman Term Professor in Newspaper Journalism before being named the Walter Spearman Professor in 2005.

Yopp served as associate dean for undergraduate studies and senior associate dean in the school before becoming dean of the Summer School in 2008. “One of the things that has struck me over the years I’ve worked with Jan is her ability to create new and effective partnerships around the university,” said Michael Smith, administrative director of the Summer School. “She’s a connector, and multiple generations of students have benefited from the resulting innovative courses, initiatives and programs she has helped launch.”

University Provost Robert Blouin also praised Yopp’s tenure at the Summer School: “Under her leadership as dean, the Summer School has supported initiatives to help students thrive at Carolina and has increased its contribution to programs such as Summer Bridge and Chancellor’s Science Scholars. Jan has built successful partnerships to launch new summer transition programs for incoming first year and transfer students and underrepresented students.”

That dedication to enriching students’ lives is a theme of Yopp’s career. She has guided the Carolina Association of Black Journalists for almost 30 years. “She was a treasured advisor,” said Averi Harper ’13. “Her generosity made it possible for so many of us to go to the annual convention, network and find internships and jobs.”

Yopp was also instrumental in creating the Chuck Stone Program for Diversity in Education and Media, and for four years was a leader of the Freedom Forum Rainbow Institute, a national program that selected 15 high school students each year to study journalism in a three-week intensive program. She was recognized for her work with the Unsung Heroes Award during the observance activities of Martin Luther King Jr. Day in 2018.

Above all, students, faculty and staff will miss a steadfast friend. “The word loyalty comes to mind when I think about Jan,” said former Interim Dean Tom Bowers. “She was loyal to her students, staff members, fellow faculty members, the school and the university. Jan was honest and spoke up for what she thought was right. … Above all, I appreciated the personal loyalty and support that she gave me so many times.”

In looking back at her years at Carolina, Yopp said: “For me, it’s always been about the students and how best to ensure they have the knowledge and tools to succeed along the paths that they choose. Finding their way on a huge campus like ours presents some challenges to all students and greater challenges to others. We admit them, and we need to commit to their success.  They give so much to us while they are here and as they share their life stories in later years.

“I had great role models as an undergraduate student and as a faculty member and administrator. The strong partnerships with faculty and staff and the many friendships I have made on this campus have guided my own journey and career at Carolina. Just the best professional life anyone could have.”