Love your job? It might be time for grad school 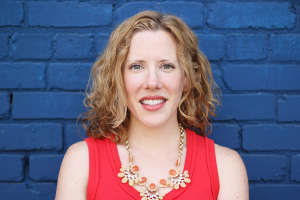 It may seem counterintuitive, but if your job is going well and you love doing it, now might be the time to apply to the UNC Hussman School of Journalism and Media’s M.A. in Digital Communication program. The online program is designed to let ambitious students maintain work and family responsibilities while refining media, communications and leadership skills.

Hussman School graduate Danielle Passingham ’14 (M.A.) is a case in point. She is the digital brand manager at Raleigh-based Peter Millar, a fast-growing lifestyle apparel brand. That means she’s thinking about digital strategy and execution across the brand’s websites, social media and email marketing campaigns. She also strategizes about product placement and media relations. And lately, she’s the company’s liaison with the recently acquired G/FORE, a golf brand founded and designed by Mossimo Giannulli. For G/FORE, she’s doing everything from site merchandising to branding to inventory tracking and back-end web work.

“She’s our storyteller,” is how Director of E-Commerce Mike Kaselitz described her role.

Passingham is a California native who has called Raleigh home since she was eight years old. A Wake Forest University business graduate, she had years of ad agency experience and had landed her dream job in marketing and communications with Burt’s Bees when she was accepted into the Hussman School’s online master’s program in 2012.

“I worked so hard to get a job there,” she said. She’d dreamed of working with the company since Passingham’s mom threw a party for Raleigh businesswomen. That’s when the teenager met former Burt’s Bees CEO Roxanne Quimbly, and was taken with the way the corporate executive had merged her own environmentally friendly lifestyle with the mission of her company.

In the ensuing years, Passingham volunteered with Burt’s Bees for Earth Days, sent handwritten letters and even jars of honey expressing her interest in working there — “anything to stand out,” she laughed — and continued to network while she learned the ropes and then some at various Triangle-based ad agencies.

Brian Berklich, now director of brand strategy at One Better Ventures, worked with Passingham at Burt’s Bees in his role as global marketing manager. He remembered Passingham getting in touch.

“I was impressed by our conversation, her personality and her intellect,” he said, pointing out that she had done an extensive amount of research before making the phone call. “She made enough of an impression on me to say to my colleague, ‘Here’s someone you might want to reach out to when the time is right.’”

“Two things attracted me,” she said. “The Hussman School has an excellent reputation — I couldn’t find better — and is right in my own backyard. And the online program offered the ability to work while I was getting the degree, which appealed to me and fit into my life.” She talked it over with her husband, Kent, who was supportive from the start.

“I always knew she could do it,” he said. “We worked together to make it happen.” He upped his game around the house and gave his wife time and space to get the program done, on board from day one when his wife returned from her Hussman School orientation with the knowledge that it would take an average of two hours a night on weekdays and four hours a day on weekends to keep up with the program.

“She did exactly that,” he said about the time Passingham devoted to grad school. “It may have been more on any given day, but it was never less. That’s how she is.”

“Sometimes I felt like, ‘wait, my brain is going to explode,’” said Passingham of juggling school and work and family life. But she was determined to take on this new challenge and wasn’t scared by lofty goals. “I’m built for stamina,” she said.

Hussman School Associate Professor Rhonda Gibson directs the M.A. in Digital Communication program. Gibson found that the Burt’s Bees standout “exemplified the type of student that we thought this program would be useful to."

“She’d been very successful and liked what she was doing,” Gibson said. “But she wanted to advance her career opportunities by broadening her skills and by almost ‘rethinking’ who she was.” Gibson remembered Passingham’s openness to learning new material. “She had the ability to apply what she was learning on the job from day one which gave her the opportunity to benefit not just from classes, but from the guidance of 17 working professionals who were participating in the virtual program alongside her.”

In the middle of the program, Passingham’s mentor Berklich, who had followed Replogle to Seventh Generation, asked Passingham to join the team. He was looking for someone who could work with a small “7th Gen” entrepreneurial unit based in Raleigh. He sought Passingham out for her energy level and strength in sharing her own point of view, along with a willingness to stretch her capabilities.

“It was the hardest decision I ever made,” said Passingham. “I loved the people and the [Burt’s Bees] brand.”

But working with Berklich gave her the opportunity to work in what was essentially a start-up within a more stable environment. And, Berklich pointed out, it gave her daily access to executives such as Replogle and Pete Alberse at Seventh Generation, not just formally but in terms of observation and daily hallway check-ins.

“Based on his experience, I believe [Replogle] thinks incredibly highly of Danielle,” said Berklich. “And that’s a result of her performance and the results she achieved.” He thinks Passingham is on track to continue to evolve into a marketing leader who is both highly principled and highly effective.

When Seventh Generation introduced an environmentally friendly water bottle named Bobble, he and Passingham were able to work at the Raleigh office to strategically brand and market the product in a flexible, fast and creative way. The project became her thesis, which she shared internally afterwards.

“That gave folks the opportunity to engage and to be a sounding board,” said Berklich. “She touched on some challenging concepts — what was working, what could be optimized. She brought up some things others would be hesitant about sharing. She did it with the best intentions and a humble attitude.” He admired the way she connected what she was learning and what she was doing at Seventh Generation in a thoughtful way.

Passingham went on to graduate in 2014. That spring she was recognized as her cohort’s outstanding graduate.

When Seventh Generation was acquired by Unilever in October 2017, Passingham and her husband decided that they were too rooted in Raleigh to leave for Vermont or New Jersey, where Unilever is headquartered. She looked for a new position where she could add value. A mentor from Carolina, Senior Associate Dean Heidi Hennink-Kaminski, provided a sounding board when Passingham received two offers and made the decision to join Peter Millar.

At Peter Millar, Passingham uses communications and leadership skills on a daily basis that she learned in the graduate program.

Regardless of where she brings her talents, “She never sits still,” said Gibson. “That’s the type of person we’re looking for in this program. You have to have that to be able to balance a rigorous program, a full-time job and a full life at home.”

The UNC Media and Journalism School’s M.A. in Digital Communication program accepts up to 20 communications professionals a year. Applications for fall 2018 are being accepted through June 12.