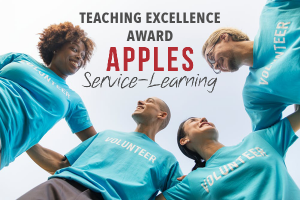 Lecturer Marshele Carter held her face in her hands, though she couldn't hide her smile.

"I didn't know that's what this interview was about," she said in a small, though excited, voice.

Carter has received the 2019 APPLES Teaching Excellence Award. Carter is only the second person in the Hussman School to receive this distinction — Associate Professor Lois Boynton being the first — for commitment and dedication to service-learning in the Carolina community.

APPLES, an acronym for Assisting People in Planning Learning Experiences in Service, was founded in 1990 by undergraduate students looking to apply their knowledge in the classroom to experiences out of the classroom. In 2009, APPLES joined the Carolina Center for Public Service (CCPS). This collaboration brought richer insight and greater resources to the student organization and the organizations it benefited in the community.

Every year, five awards are given to recipients who have been involved in APPLES service-learning. The Teaching Excellence Award was established in 2004, along with the Community Partner Excellence Award, to recognize a faculty member dedicated to bringing service experiences to the classroom. This year, Carter was nominated by students, faculty and community partners for the Teaching Excellence Award. She was chosen among the organization's student executive board as the 2019 recipient, but garnered praise among many others in the APPLES program.

"In my experience with Marshele, she is a constant advocate for service-learning and demonstrates a true commitment not only to contributing to the community, but also to providing meaningful experiences for students," said Becca Bender, senior program officer for community engagement with the Carolina Center for Public Service.

Carter earned her M.A. in Mass Communication from the Hussman School in 2014. She wanted to hone her skills and learn more about nonprofit communication, corporate social responsibility and how nonprofits could partner with companies to have even greater impact; however, her proclivity toward serving others began well before she wrote her thesis.

"My journey into the nonprofit realm started with my passion for writing and writing on behalf of a cause," said Carter. "For me, that cause was supporting families that needed encouragement during combat and supporting families who were receiving their veterans back with the invisible wounds of war. I began to see the value and privilege of being in a leadership role in a nonprofit organization and the influence you can have on so many lives on behalf of that cause.”

In 2002, Carter founded Hope for the Home Front — along with publishing a book by the same name — to serve military families by fundraising and networking with donors, as well as advocating on Capitol Hill as a keynote speaker. After completing her master's, she founded Carolina Cause Communications, a nonprofit public relations agency that works with other nonprofit organizations to better represent North Carolina's vulnerable populations.

According to Carter, these populations are children; the hungry; the homeless; people who have been traumatized, trafficked or imprisoned; and people that are overcoming incredible challenges and need support from the community around them to sort things out and get back on their feet legally, emotionally or spiritually. While Carter started with a focus on military veterans, she realized she had the bandwidth to help so many more people.

Carolina Cause Communications was founded with Psalm 82:3-4 in mind:

After discovering the psalm, Carter realized there were already people and nonprofits around the world aiming to help the weak, fatherless, poor and oppressed, but recognized the lack of tools available to them.

"They really need help in knowing how to more effectively communicate to their target audiences and how to compose their message in a way that’s memorable and attention-getting, and issues a call to action that people will respond to so that the end result is that the vulnerable person is helped in the end," Carter said. "There’s a huge gap between the good that [nonprofits are] doing and the impact that we can have, and it’s called communication.”

This is not the first time Carter has landed on APPLES' radar. In Fall 2018, Carter launched a new "MEJO 490: Special Topics in Mass Communication" section titled "Cause Communications" through APPLES' Service-Learning Course Development Grant. Funded with $5000, Carter developed the course to teach public relations in a way that would benefit nonprofits and APPLES' clients, leading to student-run workshops in the Carrboro community. The course will be offered again in Fall 2019 on Tuesdays and Thursdays at 11 a.m.

Carter has taught service-learning courses for six years with the Hussman School, working directly or indirectly with roughly 60 nonprofits in the local area.

“I was really stunned," Carter said when asked how she reacted to the award announcement. "It was Christmas break, and I was standing in the kitchen just catching up on email, and I saw an email that I thought was spam. But then I opened it and saw that it was addressed to me, and I read about the award, and I just did a happy dance."

Carter quickly redirected the attention onto the other faculty members who helped her throughout her service with APPLES.

"I wouldn’t have realized this moment ... I wouldn’t have experienced this moment had it not been for a lot of other people in my department who really believed in me and gave me a chance. People like Chris Roush, Lois Boynton and Charlie Tuggle who saw potential and encouraged me. I don’t see it as just me winning, I see it as our team winning."

Carter's win is representative of the hard work and dedication to service-learning by all of UNC's faculty members. Each media and journalism course involved with APPLES, whether it's "MEJO 332: Public Relations Writing" or Carter's own MEJO 490 section, puts the Hussman School one step closer to bridging that gap and providing applicable communication strategies to the local nonprofit community.

The awards will be given during the APPLES Community Celebration on Friday, March 29, from noon to 2 p.m.