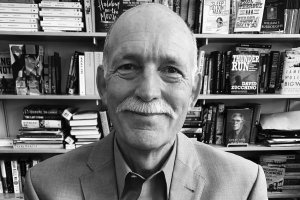 On Monday, February 24, Pulitzer Prize-winning journalist and author David Zucchino ’73 will come to UNC Hussman to discuss a new book that uncovers some dark episodes of North Carolina history. Zucchino — who is a UNC Hussman alumnus, former lecturer at the school and inductee of the North Carolina Media & Journalism Hall of Fame — is already winning acclaim for his new historical nonfiction book “Wilmington’s Lie,” which he will discuss as part of the Nelson Benton Lecture Series. Watch a livestream of the lecture here:

The book tells the little-known story of the Wilmington coup of 1898. Zucchino uses contemporary newspaper accounts, diaries, letters and official communications to tell the story of 1890s Wilmington, North Carolina. At the time, the city had a growing African-American middle class and government that included black officials. But North Carolina’s white supremacists used a campaign of rallies, race-baiting editorials and newspaper cartoons and fabricated news stories to raise tensions and win control of the state legislature in November of 1898. Days later, their supporters kicked off a violent sweep of Wilmington, leaving at least 60 dead in the streets. Zucchino weaves together individual stories and accounts in what the New York Times calls a “brilliant” and “heart-wrenching” account of the violence and the trauma that still echoes today.

Zucchino is a contributing writer for The New York Times. He has covered wars and civil conflicts in more than three dozen countries and is a four-time Pulitzer Prize finalist for his reporting in Iraq, Lebanon, Africa and inner-city Philadelphia. He won a Pulitzer Prize for his dispatches from apartheid South Africa. Zucchino returns to UNC Hussman as part of a series of lectures from distinguished journalists, established by family and friends of longtime CBS News journalist Nelson Benton after his death in 1988. Benton, who began his broadcasting career at radio station WSOC in Charlotte after receiving his degree from UNC in 1949, went on to serve an Emmy-winning correspondent, covering Watergate, Richard Nixon’s resignation, the American space program and pioneering the energy beat for CBS News.

Zucchino will join Hussman students and faculty for an in-depth conversation about “Wilmington’s Lie” and its themes on February 24 at 4:40pm in the Carroll Hall auditorium. Zucchino will give brief opening remarks followed by on-stage discussion and Q&A led by Associate Professor Trevy McDonald and students Excellence Perry and Charlie McGee. The event is being held as a special session of the MEJO 101 course. It is free and open to the public, but please register here.