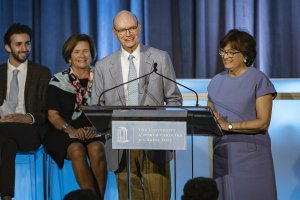 Objectivity, impartiality, integrity and truth-seeking: On Homecoming weekend, Carolina honored those core journalistic values and took a step into the future of journalism and media education, with a day celebrating the new UNC Hussman School of Journalism and Media.

At a standing-room-only ceremony, the school assumed its new name, and honored the transformational contribution of Walter E. Hussman Jr. ‘68 and the Hussman family. With a $25 million gift, the largest single gift ever to the school, the Hussmans and the school signaled a lasting investment in the future of journalism education at a time when it’s most needed.

Walter Hussman, accompanied by his wife Ben and family, reminded the audience of the core values behind his life of service to journalism and said of the family’s role at UNC Hussman: “This moment for us is one of the most meaningful moments, at least I feel, in my lifetime.”

Hussman and King were joined by alumna Joyce Fitzpatrick ’76, Chancellor Kevin Guskiewicz, and Board of Trustees Chair Richard Y. Stevens, who all addressed the crowd at the naming ceremony, along with students who have experienced the school’s impact firsthand. Taylor Doggett ’20 told the crowd, “In the classrooms of Carroll Hall, I found a home. I am thinking, learning and - most importantly to me - doing, every single day” and Payton Tysinger ‘21 thanked the Hussmans, noting that the gift “shows us that someone cares for the trajectory of my career and for the trajectory of journalism as a whole.”

Later  students celebrated the investment in their future on the lawn outside Carroll Hall. On the way out, Dean King and the Hussman family also unveiled another symbol of the school’s bright future: The entrance hall now holds plaques inscribed with the Hussman School’s core values on one side of its entrance hall and the First Amendment on the other.

But it wouldn’t be a Carolina celebration without a visit to Kenan Stadium. At the UNC-Duke game, the word Homecoming took on another meaning as the entire UNC community came together to welcome the Hussman family back to campus and celebrate the future of the Hussman School of Journalism and Media. The packed stadium rose to its feet to cheer as the Hussman family walked out and the announcer celebrated the school’s integrity and commitment to excellence.

Hussman also spoke with Dean King on the Start Here/Never Stop Podcast about about the meaning of the gift and his family's legacy and work in journalism. Listen to the episode here.