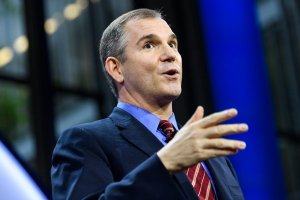 Spring Commencement of 2020 will be an exciting one for UNC Hussman School of Journalism and Media students, faculty and staff. Business and journalism leader Walter E. Hussman Jr. '68 will deliver UNC Hussman's commencement address on Saturday, May 9th. And acclaimed New York Times journalist Frank Bruni '86 will deliver the UNC-Chapel Hill address at Carolina’s Spring Commencement on Sunday May 10th. Read the UNC Hussman announcement here and scroll down for UNC-Chapel Hill's story on Bruni.

Acclaimed journalist, New York Times columnist and bestselling author Frank Bruni ’86 launched his journalism career as a student reporter at Carolina. Now, Bruni is returning to his alma mater to send off the next generation of graduating Tar Heels.

Bruni, who writes candidly about some of the most pressing issues in politics, culture and higher education, will deliver the keynote address at Carolina’s Spring Commencement on May 10 at Kenan Stadium.

“If you had told me when I graduated that I would be the Commencement speaker someday, I would’ve thought that was ridiculous,” he said. “It kind of blows my mind.”

Chancellor Kevin M. Guskiewicz invited Bruni back to Carolina to share a unique perspective with the graduates as they begin the next chapter of their lives.

“We are honored to have Carolina alumnus Frank Bruni as the Commencement speaker for the Class of 2020,” Guskiewicz said. “An active member of our campus community, Frank has written extensively on important issues facing our country, as well as the changing landscape of higher education. I am excited to hear him share his story. Thank you to the Commencement Speaker Selection Committee for their hard work to help select a speaker who will inspire our students to take the knowledge they have gained here and use it to serve our state, our nation and the world.”

Bruni has written for the New York Times since 1995 and over that time has served as an op-ed columnist, White House correspondent, Rome bureau chief and the chief restaurant critic. He is also the author of three New York Times bestselling books, including his 2015 book on college admissions, “Where You Go is Not Who You’ll Be.”

Starting out as a reporter for the Daily Tar Heel — Bruni’s “center of gravity” at Carolina — he never imagined that his career would lead him to such extraordinary places. He has followed stories to London with actress Vanessa Redgrave, to the presidential campaign trail, and to exclusive dinners with some of the world’s most famous politicians and religious heads of state.

But Bruni, who studied English and was a Morehead-Cain Scholar, credits UNC-Chapel Hill for opening his eyes to diverse people and experiences, laying the foundation for his writing career.

“For me, Carolina was an enormous widening of my world,” he said. “I feel like my friends and classmates at Carolina represented a cross section of American society that you don’t find at a lot of other universities, and I think that opened my eyes in important ways. It was especially valuable to me as someone who wound up being a journalist writing about America.”

As Bruni reflects on his time in Chapel Hill, he remembers it as the home of a distinguished faculty and a wealth of learning opportunities.

“It was a place where if you became interested in something and if you put energy into it, you saw opportunities open up,” he said. “You had faculty members who took a personal interest in you. You had course offerings that let you explore intellectually to a degree that you can’t at many schools in the country.”

Bruni has returned to UNC-Chapel Hill several times since he graduated, including to deliver the 2015 Eve Carson Memorial Lecture and to discuss political discourse on the stage with former UNC System President Margaret Spellings at an event hosted by the UNC Institute of Politics in 2018. As a member of the Chancellor’s Think Tank, a group of thought leaders who provide counsel about Carolina, Bruni has provided valuable insight on challenges and opportunities for the University.

Ahead of graduation in May, Bruni encourages Tar Heels to reflect on the value of their Carolina education.

“[Higher education] teaches you how to experience, process and assess the world in a way that has much more meaning than just a casual, flitting view of life,” he said. “And I think for those students who are leaving UNC, if they reflect intelligently on what they’ve seen and continue to internalize as they go forward, they are about to become much more deeply satisfied and much more productive members of society.”