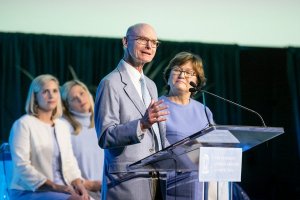 The UNC Hussman Spring Commencement address will come from someone with a unique perspective on how the school has innovated and grown this year: Walter E. Hussman Jr. ’68.

The Hussman School of Journalism and Media began the academic year with the game-changing announcement of its new name and transformational contribution from Walter Hussman and the Hussman family. With that $25 million gift, the largest single gift ever to the school, the Hussmans and the school signaled a lasting investment in UNC students and commitment to the Carolina community.

“Walter Hussman is well-known as a highly-successful leader in journalism and business. It’s been the professional passion of his life,” said Dean Susan King. “Walter exemplifies so much of what we want all of our students to be able to achieve — high ethical standards; an innovative, adaptable mindset; strong business acumen; and a deep commitment to serving their communities.”

At the UNC Hussman naming ceremony in October, Walter Hussman told students “the school has come a long way in the 50 years since I graduated with a journalism degree.” In the months since then, the school has grown even more, as Hussman faculty and students continue to exemplify the innovative spirit, groundbreaking research, on-the-ground career training and award-winning work that has long elevated the school to one of the best in the nation.

Hussman is a business leader who has grown a successful local news company while developing core values of journalism. Business innovations have been a hallmark of his leadership in the media industry. Most recently, he has drawn attention for an innovative iPad program for digital distribution of his Arkansas Democrat-Gazette. He will provide the school’s advertising, public relations and journalism students with reflections and advice on forging a path forward in a changing world.

“I am honored to speak at the Spring Commencement for the school,” Hussman said. “Both the practice and business of journalism are challenged today in unprecedented ways. I hope to offer some ideas to meet and overcome those challenges.”

The UNC Hussman Commencement will take place on Saturday, May 9, 3:30 p.m. in Carmichael Arena.

Hussman, who grew up in Arkansas, comes from a long line of news business leaders. He began working in his family business at age 10 after school. Hussman later enrolled as an undergraduate at Carolina, as encouraged by high school history teacher and lifelong mentor Walker Blanton, a 1960 Carolina graduate.

As social chair at DKE, Hussman was enjoying Carolina a bit too much when, as he tells it, Professor Walter Spearman “put a burr under my saddle” to think more seriously about what he wanted to do with his life. “It was a really great conversation,” Hussman remembered in an interview with the Pryor Center at the University of Arkansas. “And it was more important than I realized at the time.”

A focused Hussman graduated in 1968 with his journalism degree. He received an MBA from Columbia University and worked as a reporter for Forbes magazine from New York City before returning in 1970 to help run the family business from Camden, Arkansas. In 1973, the family business became “WEHCO” Media for “Walter E. Hussman Company.” In March 1974, Hussman and his father purchased the smaller, struggling Arkansas Democrat, Little Rock’s afternoon daily newspaper. Hussman moved to Little Rock, where he became the paper’s publisher at 27. This set in motion a rivalry with the morning Arkansas Gazette that some would call “The Great Newspaper War.”

In 1981, Hussman became president of WEHCO Media, and then CEO. The paper wars over subscribers and advertisers ended 17 years later when the Gannett Corporation closed the Arkansas Gazette. WEHCO bought the paper’s assets, and the first Arkansas Democrat-Gazette was published the next day, October 19, 1991. WEHCO purchased papers in Chattanooga in the late 1990s and combined them to become the Chattanooga Times Free Press. In 2008, WEHCO Media purchased two Missouri daily papers and one weekly. The company also moved into cable broadband, IP-enabled voice and digital services. Hussman’s nephew Nat Lea was named CEO in 2016 after fourteen years with the firm.

The Hussmans’ twin daughters graduated from Carolina in education and English; and Eliza returned to Carolina to prepare the paper for a digital future, graduating with her master’s degree from the school in 2012. The three children — two of whom work at WEHCO Media with their father — and eight grandchildren all live in Little Rock.

Members of the Hussman family returned to campus and spent the day with the school’s students and faculty on October 25, 2019 for the UNC Hussman naming ceremony.

“We are grateful for the Hussman family’s support of the work and experiences of all of our students and faculty,” King said. “And I am thrilled that our students and their families will hear from Walter as they celebrate their commencement this spring, our first ceremony as the UNC Hussman School of Journalism and Media.”