Producing ‘The College Test’ for ‘60 Minutes’ 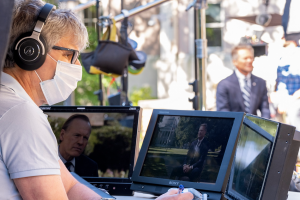 “A great opportunity for this generation to step up,” says “60 Minutes” producer about campus plans to reopen this fall.

On Sunday evening, June 14, 7.9 million viewers tuned in to “60 Minutes,” CBS’ flagship news program, and saw University of North Carolina at Chapel Hill Chancellor Kevin Guskiewicz explaining the University’s plans to bring students, faculty and staff back to as safe a campus as possible in the fall. “The College Test,” a 13-minute segment produced by UNC Hussman School of Journalism and Media alumnus and 11-time Emmy winner Draggan Mihailovich ’83, was the first news segment of the episode.

“The College Test” dove into the huge challenge faced by colleges and universities as they prepare for fall classes in the midst of the coronavirus pandemic. The story opened with Guskiewicz and correspondent John Dickerson sitting outside of South Building, talking about reopening Carolina’s campus to 30,000 students. 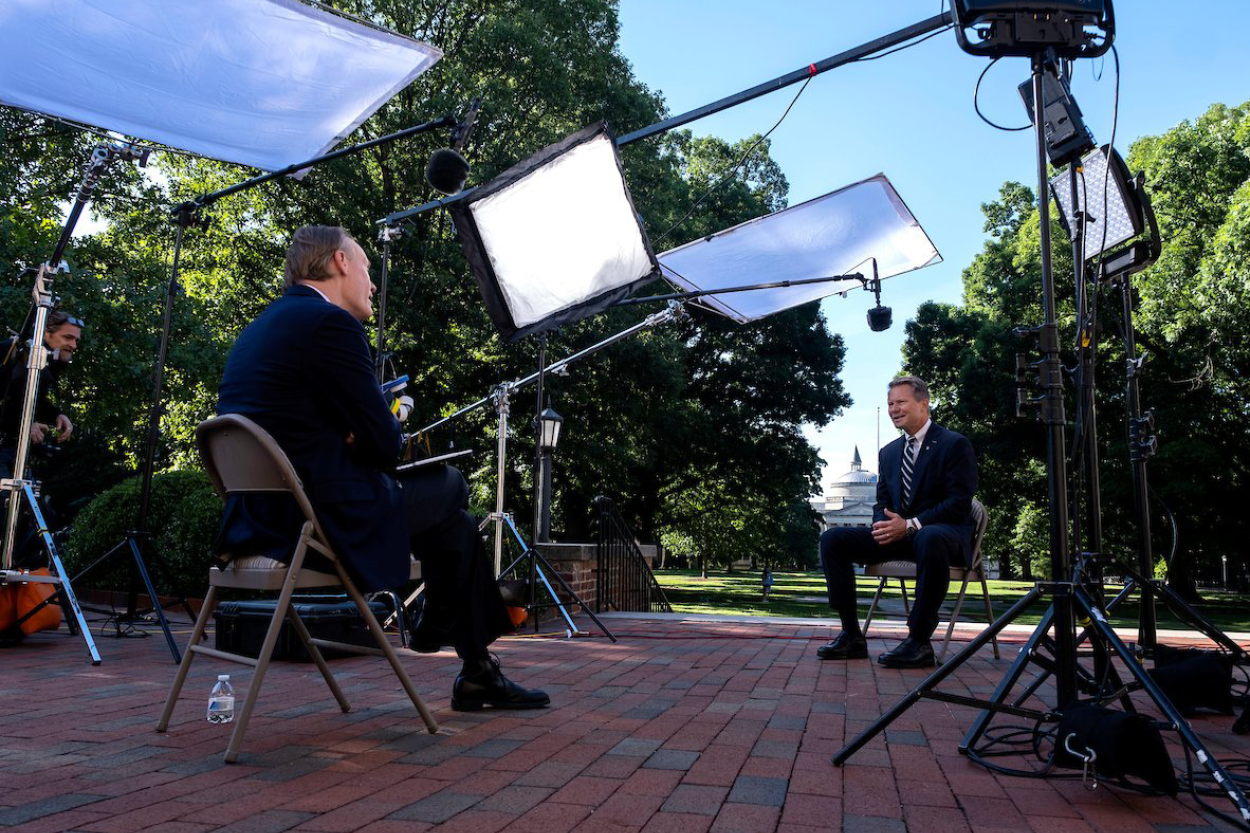 “I can’t think of another coordinated return as large as that of campuses across America preparing to open up,” said the show’s producer, a Chapel Hill native and the son of a former Slavic languages professor at Carolina. Mihailovich has been with CBS since 1989, starting as a senior researcher for CBS Sports and eventually joining “60 Minutes” as a producer in 1998.

The alumnus produced the June 14 higher ed piece with his late father in mind, wondering how Professor Mihailovich would have adapted to office hours on Zoom and the challenges of teaching “hyflex” language classes while wearing a mask.

But even now, Mihailovich is bullish on the potential for things to go right.

“I’m not naive — I know that just because there is a plan, it doesn’t mean it will work out perfectly. But I do think if I were going to send my child somewhere right now, a college campus like UNC might be the place to be,” said Mihailovich after researching and producing the story. If coronavirus cases continue to spike on a Florida or Texas level, he added, he might reconsider — but noted that the school probably would as well.

He went on, “There are hospitals, there are researchers who can do tracking, there are leaders who are not ignoring the risks and who have teams of experts to make plans and contingency plans.”

During their May 31–June 1 shoot on campus, Mihailovich and the “60 Minutes” crew ran across a handful of alumni dressed in Carolina blue caps and gowns posing in front of the Old Well, catching up on the spring graduation photos they missed out on when they were required to stay home after an extended spring break due to the coronavirus threat.

Incoming student body president Reeves Moseley told “60 Minutes” on air that a lot of his fellow students wanted to get back on campus after that remote end to spring semester.

Why now? Why UNC?

The “60 Minutes” staff has been quarantined at home since early March.

In a typical year, they’d be disbanding by June, leaving their West 57th Street Manhattan offices to recharge and prepare for the fall season.

Mihailovich remembers “The College Story” coming in to him in mid-May. Owens (the EP and parent of a college-bound son) and correspondent John Dickerson felt it was a story worth looking into, acknowledging the changing nature of higher education’s planning in the face of a moving target. It was time to take the sector’s temperature on a fall return to campus.

The time-sensitive college story fit his wheelhouse and his calendar, and with UNC among the first schools to announce a plan to bring 40,000 students, staff and faculty back to campus in the fall, a May 31 road trip down I-95 to Chapel Hill from Mihailovich’s Connecticut home — alone in his Mazda, following social distancing guidelines — quickly materialized. He, Dickerson, two camera and two audio crew members converged on campus, and found an unusual amount of parking spots available.

“UNC was a good fit for us,” Mihailovich said, “because it’s a large public institution, the flagship of a larger system, and the school already had announced its plan and was willing to talk about it.”

UNC’s communications team lead by UNC Hussman alumnus Joel Curran ’86 with assistance from alumna and media relations manager Jeni Cook ’96 were supportive, giving Mihailovich and associate producer Jacqui Williams access to Roadmap information and to the leaders on campus whom they sought to interview on campus.

Curran talked about making the decision with Chancellor Guskiewicz to talk with “60 Minutes.”

“We had no idea where the story was going to go,” said Curran. “But we felt relatively confident that the world’s best infectious disease team and a pan-university team — a lot of really smart people and smart thinking — were and are involved in our fall planning.”

“We were in as good a place as we could be,” Curran added. “And we had already made the initial Roadmap for Fall 2020 public. So we thought — if we’re going to be talking about it, we might as well own it. There’s no better place than ‘60 Minutes’ to tell our story: We do have a plan. The plan has options. We won’t do anything that compromises the health and safety of our campus community; and we are all-in in terms of the shared responsibility to uphold community standards.”

“Many schools were not nearly as transparent as UNC,” said Mihailovich. “Several have announced their plans to open but have not detailed what those plans will be. Others, particularly in the Northeast, are still in a wait-and-see mode.”

UNC video content producer Rob Holliday — whose father mentored a young Mihailovich at WCHL — provided some of the B-roll that brought Carolina’s campus to life for the viewers at home that recent Sunday evening.

When ‘60 Minutes’ comes to town

A producer’s job is to worry. Mihailovich and associate producer Williams did just that, for the two weeks of fact-checking leading up to filming leaders at Carolina and at The College of William & Mary in Virginia; former Secretary of Education John King; and a sidelined student — and for the two weeks they had afterwards to assemble the segment.

Would it rain on the outdoor interviews? Ceaseless weather.com checking commenced.

Did they have all of the right questions? The producers spoke with faculty chair Lloyd Kramer and employee forum chair Shayna Hill to help inform their questions from the point of view of the 10,000 faculty and staff asked to return to campus for an August 10 start; and researched the NC Department of Health and Human Services website and its equivalent in every state they shot in before the shoot.

Would the story fit into one segment? It was so layered, the interview with UNC Athletics Director Bubba Cunningham had to move to “60 Minutes Overtime” online.

Would the team get access to some interior shots on either campus? They shot B-roll in the Dean Dome, the Genome Sciences Building, a classroom and a dining hall that was being prepared for fall semester in Chapel Hill.

Would they be able to avoid the ubiquitous Zoom interviews? Yes, the Carolina student body president arrived from his home in the Dallas area just in time to allow for all face-to-face interviews at Carolina.

The art and craft of broadcasting during the coronavirus pandemic

Longtime “60 Minutes” editor Warren Lustig and Mihailovich have told countless news stories together. For this one, Lustig turned a camera unto the monitor in his home office “editing room” and the two talked through their edits to the segment from the safety of their own homes.

Lustig completed the color correcting and audio work in two days of back-and-forth travel to a NYC rented studio space over a weekend in June. The quarantine guidelines allowed for only one person per team in the studio. The first and second screenings of the piece with executive producer Bill Owens, senior producer Tanya Simon and others took place via Zoom.

The alchemy of bringing a story to life is one the two longtime collaborators Lustig and Mihailovich have won scores of Emmy awards for together. Mihailovich shared some internal guidelines: Don’t actively edit more than two stories at a time. Fact-check obsessively. Get the context right. Be fair to each person. Sit with the script and ask yourself, does it make sense to the audience? Make sure there are no “black holes” that need a compelling visual to bring a sound bite to life, or vice versa.

The broadcast interviews in Chapel Hill reiterated important messages about social distancing that continue to be shared with the Carolina community across multiple platforms.

When clarifying plans to reopen in early August and end final exams just before Thanksgiving, Chancellor Guskiewicz articulated on-air, “We’re trying to stay ahead of the potential second wave of the virus, which the experts think that if we’re gonna see that, it’s likely to happen in late November, December.”

Dr. Myron Cohen, director of UNC's institute for global health and infectious diseases, reiterated the requirements for mandatory mask-wearing and social distancing this fall by emphasizing, “Masks, masks and more masks. You, you can’t say enough about masks.”

“We reduce the density,” Cohen told Dickerson. “That is, we do not allow large numbers of people congregating. And… masks.”

When discussing the impetus behind a fall reopening, William & Mary’s President Katherine Rowe noted, “We have an obligation to ensure that this cohort of students doesn’t lose speed, doesn’t lose momentum in their college educations.”

Rising to the challenge

The June 14 “60 Minutes” story was a snapshot of Carolina’s frequently-updated Roadmap for Fall 2020, capturing a moment in time for nearly eight million viewers on a layered subject with many moving pieces. All of the Carolina leaders interviewed, and the producer behind the scenes, seem to agree that incoming data and complex planning remains to be done between now and the currently anticipated August 10 Carolina reopening.

Mihailovich closed this interview with an observation about the campus he quite literally grew up on: “This is a great opportunity for this generation to step up. If they can pull this off, if they are socially responsible and the campus can stay open, it will be a feather in their cap.”