Recoding the Boys’ Club: The experiences and future of women in political technology 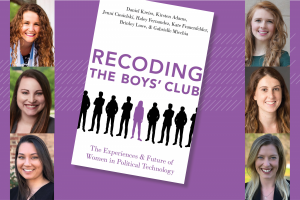 “Having a bunch of white men in a room trying to decide how to get Latina moms out to vote is not going to be as successful as making sure that people who are part of that community are at the table.” —a senior 2016 Democratic presidential campaign staffer quoted in “Recoding the Boys’ Club”

What is the workplace like for women at the intersection of politics and technology? A collaborative team of seven co-authors from UNC Hussman School of Journalism and Media wielded rigorous social science standards in the quest to find out.

Their work speaks directly to anyone curious about presidential political campaigns or with an academic interest in looking at political technology from a gender role perspective.

Most importantly, practitioners in the field and anyone interested in an inclusive workplace environment — or familiar with mansplaining, whisper networks, and layering, for that matter — will find their resulting book, “Recoding the Boys’ Club: The Experiences & Future of Women in Political Technology,” an eye-opening read.

“It felt like a true collaborative effort,” said Adams, describing a process where she and Kreiss oversaw the quantitative and qualitative work respectively, with all five of the students/recent graduates taking research roles for the project. Multiple authors then worked on specific chapters, with Kreiss — who had published two earlier academic books, one with Oxford University Press — coming in to smooth out the narrative voice.

“No one had ever studied gender before,” said Kreiss, whose dataset on 2004–2016 presidential campaign staffers from an earlier book formed the bedrock for initial “Recoding the Boys’ Club” analysis.

“This project illustrates the power of deep, immersive learning experiences for students,” said Susan King, dean of UNC Hussman. “And it aligns with our broader mission to create diversity in all its forms in the professions we serve. It is more clear than ever that a lack of diversity creates a lack of strength and an inequity that we can’t let persist. There is much work to be done, and I am proud that our students and faculty are engaged in this important work.”

Outnumbered, talked over and often, battling it out alone

The team analyzed a dataset of more than 1,000 political technology staffers (“technology” used as a shorthand for four areas of contemporary campaigning — technology, digital media, data and analytics) from presidential campaigns between 2004–2016 plus the 2020 Democratic primary campaigns.

The data showed that women are not only deeply underrepresented in the field, but lack access to leadership and entrepreneurial opportunities both during and after campaigns. Women made up only a third of all political technology staffers in 2004–2016 presidential campaigns. And for every woman in a director-level or higher role, three men held leadership positions.

In-depth research interviews followed the numbers, with 45 women from the political tech space at 12 Democratic and Republican presidential campaigns across four cycles recounting their campaign work experiences. The findings illustrated a complex environment for women in the space, fraught with stereotypes about competencies; gendered expectations about roles; a dearth of credit given or shared; and reports of formal and informal exclusion that occurred as women tried to enter the “boys’ club” of political tech.

“Oftentimes people will put … tasks that are more stereotypically female on me,” one staffer said. “Part of it is they think they’re not good enough and they just sort of think it’s my role to do, which ends up creating additional work for me, because I’m asked to do all the work the man is doing as well as additional things that somehow become my job, even if they really shouldn’t be.”

Women reported everything from demeaning comments and unfair pay to sexual harassment or even assault. The authors write, “One of the more glaring examples of this came from one woman who told a story of a male colleague who was often inappropriately flirtatious, texting her to ‘prepare your body’ for the drinking they were going to do that night at bars.”

The challenges were made more difficult by the lack of women leaders to turn to for support and the lack of accountability within these campaigns — particularly a lack of HR infrastructure.

Another seasoned political tech staffer recalled, “I think the Clinton campaign had more HR kind of paperwork and a behavior handbook and stuff like that,” she told the researchers, “but in the campaigns that I’ve been on, it’s literally like, ‘Here’s your W-2 or W-9 or whatever,’ and that’s it. That’s all you get from the campaign.” The 2016 campaign had only four HR/diversity officers at headquarters responsible for 4,200 staffers nationwide, and had to draw on resources of the Democratic National Committee.

How can campaigns do better with gender equity?

The authors reviewed the data and the insights gleaned from their interviews and looked for trends, turning those findings into a set of nine recommendations for how campaigns can create a more equitable playing field of the future.

Recommendations include being more intentional in hiring practices, promoting more women into leadership positions; investing in better HR; going beyond lip service in terms of diversity in terms of not just who is hired but who is supported and promoted; and creating a better work-life balance.

Women in political tech also advocated for more training and networking opportunities; and for men taking on new responsibilities of responsibility and advocacy in the #MeToo era. Media coverage of presidential campaigns spotlighting diverse campaign teams was seen as a potential positive force for change. And women supporting other women was called out as well.

A veteran of three campaign cycles put it this way: “There are things that I may not always do for myself but then I look at my female friends and I think, ‘No, I’m not letting you get away with that. You should absolutely be getting credit for that,’ and I will stand up. And so as you get more women in the room, it is easier for a woman to stand up for someone else.”

Gabrielle Micchia ’19, who currently works on the digital team at a New York global public relations firm and envisions a career furthering women in politics, interviewed a high-level political tech staffer who regularly gathered with a group of her friends in the space to socialize and “just validate the shit out of each other” as the politico put it.

“I learned that if someone that powerful, whom I look up to and admire, needs validation,” said Micchia, “then we all do.”

The idea for the project came about in an undergraduate “Washington, D.C. Experience” class at Hussman in the fall of 2017 funded in part by an anonymous donor, and was fleshed out by 12 undergraduate students in Kreiss’ spring 2018 “Special Topics” class, supported by a grant from UNC’s Office for Undergraduate Research. That class culminated back in the nation’s capital in May 2018, with an 80-page report presented to a network of around 100 political tech practitioners culled from both Kreiss’ contacts and the vast UNC Hussman alumni network. But it didn’t end there.

Adams said, “We realized early on how rich the information was, and how much more we had to say that couldn’t fit into a report.”

Five undergraduate team members agreed to stay on the project with Adams and Kreiss, two after graduation and three in an additional undergraduate research course. Kreiss again took on the extra course load to make it happen; Adams added the project alongside her Ph.D. work; and Ciesielski, Fernandez, Frauenfelder, Lowe and Micchia committed to what turned into a two-year book development process.

“It was an honor to work on this project,” Frauenfelder said. “We owe a debt of gratitude to the women who graciously shared their stories with us. It did seem daunting to take on as I was entering the workforce for the first time, but those late nights writing were entirely worth it. I couldn’t pass up the opportunity to participate.”

To return to the question: What is the workplace like for women at the intersection of politics and technology? The “Recoding” research reveals that the intersection is full of gender-related potholes, obstacles and “do not enter” signs, with many women citing gender bias as a reason they left the field. Yet women continue to forge ahead in the space.

The path to more gender equitable and inclusive environments is mapped out at the close of the book, and is being paved by many of the authors themselves. A majority of the undergraduate authors left UNC Hussman for the political arena, where many are experiencing firsthand the challenges of breaking into the boys’ club.

Undaunted, they are actively working to craft more equitable and inclusive workspaces, armed with insight and the tools provided by the 45 women whose voices they have showcased in “Recoding the Boys’ Club.”