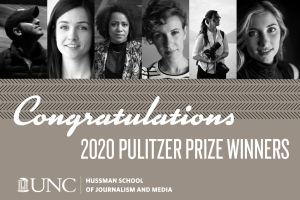 The UNC Hussman School of Journalism and Media is proud to celebrate six graduates who have been awarded a 2020 Pulitzer Prize. This year’s winners represent the breadth of experience and talent of the school’s alumni community and the continuing impact of UNC Hussman on the journalism industry.

“We are so proud that our alumni continue to lead national conversations. Throughout their beats and fields, they make their mark by not just covering news, but uncovering it,” said Susan King, dean of the school. “That is the UNC Hussman value, and we are happy to see our students carry the lessons they learned from our excellent faculty and staff and peers into the world as alumni.”

UNC Hussman has a proud tradition with Pulitzer Prize awards, beginning with 1943 alumnus Horace Carter. Carter won the 1953 Pulitzer for Meritorious Public Service, at the age of just 32, for his campaign against the Ku Klux Klan as the owner and operator of the Tabor City Tribune. The Tribune and The News-Reporter In Whiteville, N.C. — which also won a Pulitzer in the campaign — became the first non-daily newspapers to win that prize. The lobby of Carroll Hall now holds Carter’s Pulitzer, which he donated in 1990, in a museum-quality installation to inspire future generations.

Since the 1950s, UNC Hussman graduates have continued that tradition of public service and many have been awarded Pulitzers throughout the years. The 2020 winners were all involved in projects that sparked national conversations and recognitions:

Brady Dennis ’00 is a national reporter for The Washington Post, focusing on the environment and public health issues. He was one of the reporters for The Washington Post’s series “2C: Beyond the Limit,” which won the 2020 Pulitzer in Explanatory Reporting. Named after the benchmark two-degree Celsius temperature rise, the series used articles, photos, videos and graphics to document the effect of warming on locations across the globe. The award highlighted the “groundbreaking series that showed with scientific clarity the dire effects of extreme temperatures on the planet.” Dennis, who previously covered the economy, was a 2009 Pulitzer Prize finalist for an explanatory series about the global financial crisis.

Nancy Donaldson Gauss ’05 is an associate managing editor at The New York Times and leader of the Times' video team. Gauss’ team produced video reports for the Times’ investigations on Vladimir Putin’s rule in Russia. The staff team behind the series were awarded the Pulitzer Prize in International Reporting. The award praised the “enthralling stories, reported at great risk, exposing the predations of Vladimir Putin’s regime.”

Former Roy H. Park Fellow Nikole Hannah-Jones ’03 (M.A.), domestic correspondent at The New York Times Magazine, won the Pulitzer Prize in Commentary for her essay opening The 1619 Project, which she created and led. The print and multimedia initiative aims to reframe the country’s history by placing the consequences of slavery and the contributions of black Americans at the center of the national narrative. Read more here.

Monica Ulmanu ’10 (M.A.) is a graphics editor at The Washington Post. She studied visual design in UNC Hussman’s master’s program. Ulmanu edited graphics for The Washington Post’s “2C: Beyond the Limit,” which won the Pulitzer for explanatory reporting.

Carolyn Van Houten ’14, a staff photojournalist at The Washington Post, was also on the prize-winning team behind “2C.” Traveling to locations including Angola, Uruguay and Colorado, Van Houten provided photography for the project.

Madison Walls ’18 was also recognized for her design work on the “2C” project. Walls graduated from UNC Hussman just two years ago with a focus on interactive design. She is now a news designer for The Washington Post.