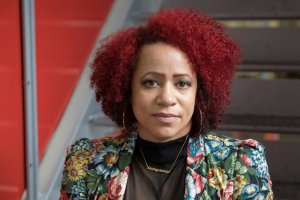 UNC Hussman School of Journalism and Media alumna and former Roy H. Park Fellow Nikole Hannah-Jones '03 (M.A.) continues to be honored for her groundbreaking journalism. Hannah-Jones, a staff writer at The New York Times Magazine, created and led The 1619 Project, a print and multimedia initiative examining slavery's role in America. The project, which began in August 2019, 400 years after the beginning of slavery in America, aims to reframe the country’s history by placing the consequences of slavery and the contributions of black Americans at the center of the national narrative. This week, the Pulitzer Prize and the Polk Awards, two of journalism's most prestigious awards, honored Hannah-Jones and The 1619 Project.

The Pulitzer Prize board announced on May 4 that Hannah-Jones had won the 2020 Pulitzer Prize in Commentary for her essay opening The 1619 Project. The award praised her "sweeping, deeply reported and personal essay" and said it had prompted "public conversation about the nation’s founding and evolution."

“Nikole Hannah-Jones has emerged as one of the leading voices in our nation,” said Susan King, dean of the school. “We challenge our students to inform the communities they serve and to ignite the public conversation around meaningful issues. Nikole has made a career of that.”

Hannah-Jones is a co-founder of the Ida B. Wells Society for Investigative Reporting along with the AP’s Ron Nixon and ProPublica’s Topher Sanders. The non-profit is dedicated to increasing the ranks, retention and profile of reporters and editors of color in investigative reporting. The society partnered with and moved to UNC Hussman in 2019. It is named after Ida B. Wells, the pioneering black journalist and an activist for women’s rights and the suffrage movement. On the same day Hannah-Jones won her Pulitzer Prize, Ida B. Wells was also honored with a posthumous Pulitzer Prize in the Special Citations and Awards Category for her "outstanding and courageous reporting on the horrific and vicious violence against African Americans during the era of lynching."

Hannah-Jones was also celebrated by the George Polk Awards this week. The 2019 Polk Awards, announced earlier this year, recognized Hannah-Jones and the contributors to The 1619 Project with a Special Award, which was presented on April 30 in a virtual ceremony. The event praised the "extraordinary effort" of Hannah-Jones and her colleagues, and included a video of Hannah-Jones' reflections on producing the project. Watch that at the 42-minute mark here.

Throughout her career, Hannah-Jones has been honored with numerous other awards including the MacArthur “Genius” Grant Fellowship, the Peabody Award for her 2015 radio reporting on school desegregation, the 2018 John Chancellor Award from Columbia University and UNC's 2019 Distinguished Alumna Award.