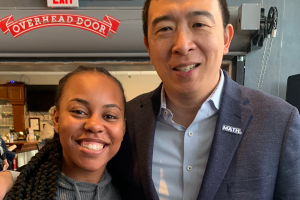 Students in co-instructor Daniel Kreiss and Joe Czabovsky’s “Undergraduate Research in Political Communication” course had the opportunity to experience firsthand what will arguably become the most newsworthy Iowa caucuses in recent history.

Immediately upon arriving in Iowa late last week ahead of the Monday, Feb. 3 caucuses, ten Hussman seniors travelled across the state attending rallies; hearing stump speeches; and interviewing candidates, press, voters, volunteers and campaign strategists, from Council Bluffs to the capital city of Des Moines to Cedar Rapids; even being interviewed themselves by over a dozen media outlets. (Taylor Doggett ’20 with Democratic candidate Andrew Yang at right.)

Traveling home since the break of dawn this morning, the team knows that President Trump handily won the GOP caucus but are waiting alongside the rest of the nation for Democratic Party caucus data to come in after what the party said was an app coding error, according to the Des Moines Register.

“The trip was an unbelievable experience for these students,” Kreiss said. “They got a first-hand view of an important American electoral institution, seeing and feeling what presidential politics looks like at the highest levels in a unique setting that is premised on direct candidate contact with voters.” 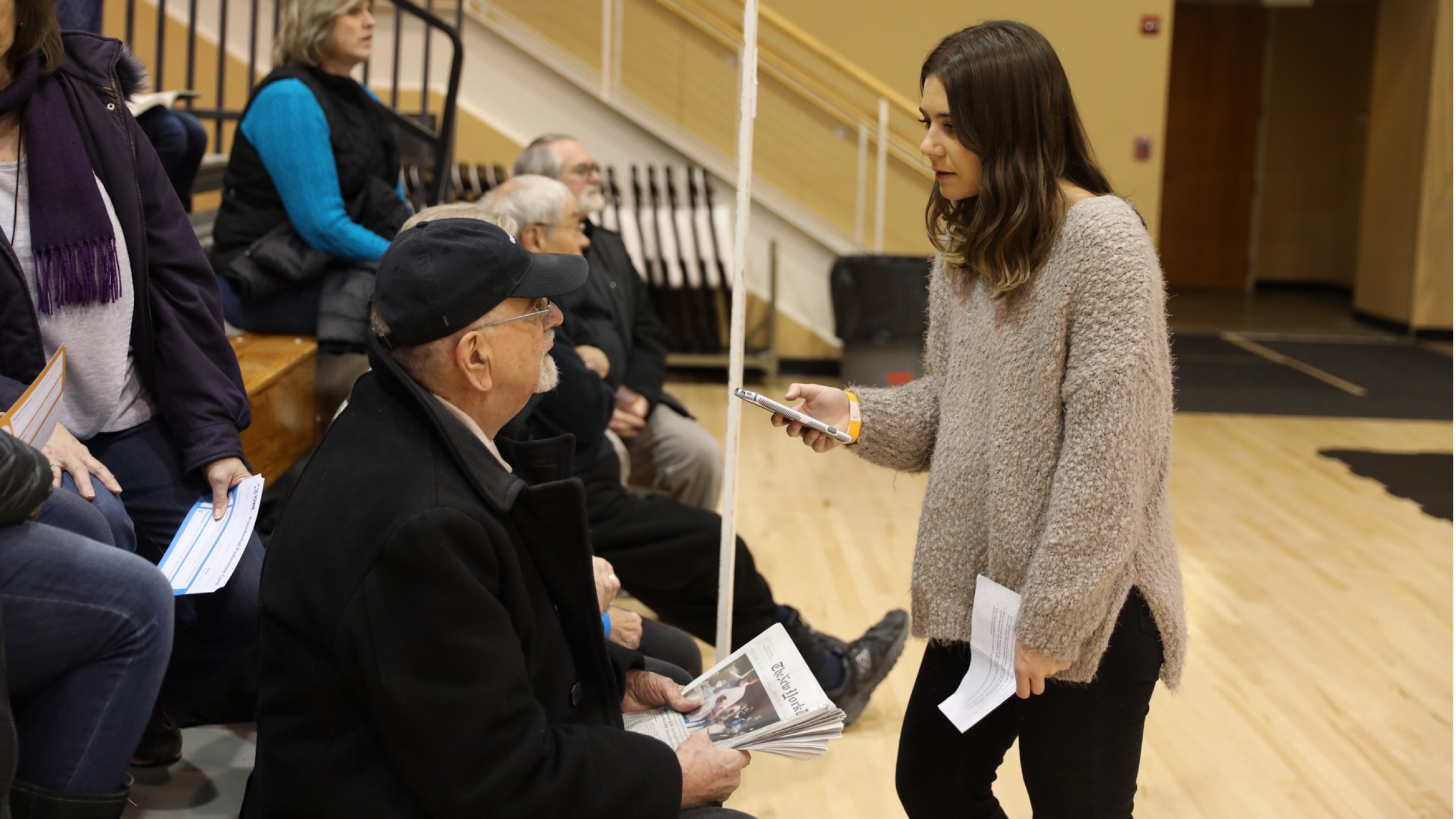 The course (MEJO 490) was designed by Kreiss and Czabovsky to allow undergraduate students to study how voters make up their minds during the 2020 U.S. presidential campaign. The qualitative first half of the semester involved training in field research and certification in human subjects research through the UNC Institutional Review Board (IRB). Students did research on political communication and deep dives into how this year’s candidates communicate with voters. Their research culminated in field work in Iowa over the past five days, when national and international media, campaign strategists and volunteers converged on the first-in-the-nation caucus state.

”The beauty of qualitative research is it gives you in-depth answers and understanding of people that you can’t get in a survey,” said Czabovsky. “As the voter base gets more diverse, candidates get more diverse. The population is changing. Our research looks at the intersection of where voters get information, who they trust, and how they view themselves — and how that changes as we change.”

Observations from the field

Talia Wlcek ’20, who studies public relations and political science with a minor in business, was the first student to arrive in Iowa. She’s a Warren campaign volunteer and was a communications intern at Siemens this summer. She and Kreiss did field research in the 2,000-plus ”overflow” crowd outside of a Trump rally on Thursday night. Wlcek noted crowd size and event logistics, and she recorded observational details like the colorful hats, T-shirts, food trucks and beach balls that made the 30° F evening feel like a concert or a county fair. She also observed a Buttigieg speech delivered by the candidate in two very different venues: he received scattered applause from an older daytime crowd in Cedar Rapids on a work day. The next day, a larger, younger and more diverse Saturday crowd met the same speech with more enthusiasum, she reported.

Molly Horak ’20, a UNC Media Hub reporter studying journalism and political science, has reported for the student-run Daily Tar Heel and as a news intern at the Asheville Citizen Times. She enjoyed the temporary switch from reporter to researcher. “It’s an interesting switch for me, to not have to take myself out of the story as much,” she said. Horak and her classmates had the chance to talk with Democratic Presidential candidate Andrew Yang and met with press and staffers at an Elizabeth Warren event in downtown Des Moines. She found it noteworthy that she’d met and interviewed several “caucus tourists” — non-Iowans who had travelled to the heartland from far-flung states like Oregon and Arizona to get to know the candidates better before voting themselves.

Amelia Fox ’20 is focusing on strategic communications alongside her public policy degree and a minor in history. She is an intern in N.C. Governor Roy Cooper’s office, and worked with Precision Strategies this summer and as a parliamentary intern in London last spring semester. During a whirlwind Saturday where the team covered four events and four hundred miles from a Yang event in Fort Dodge; to Sanders and Biden events in Cedar Rapids; to a Warren rally in Iowa City. Fox was struck both by how active the candidates had been, with multiple visits and one-on-one phone calls to caucus voters throughout the state, and how well-versed many of the Iowa voters she talked to were. She met a book club member who was “having one-on-one meetings with many of the candidates they were reading about,” she shared. “Some people in Iowa are taking their responsibility very seriously, taking the time to really research all the candidates,” she observed. 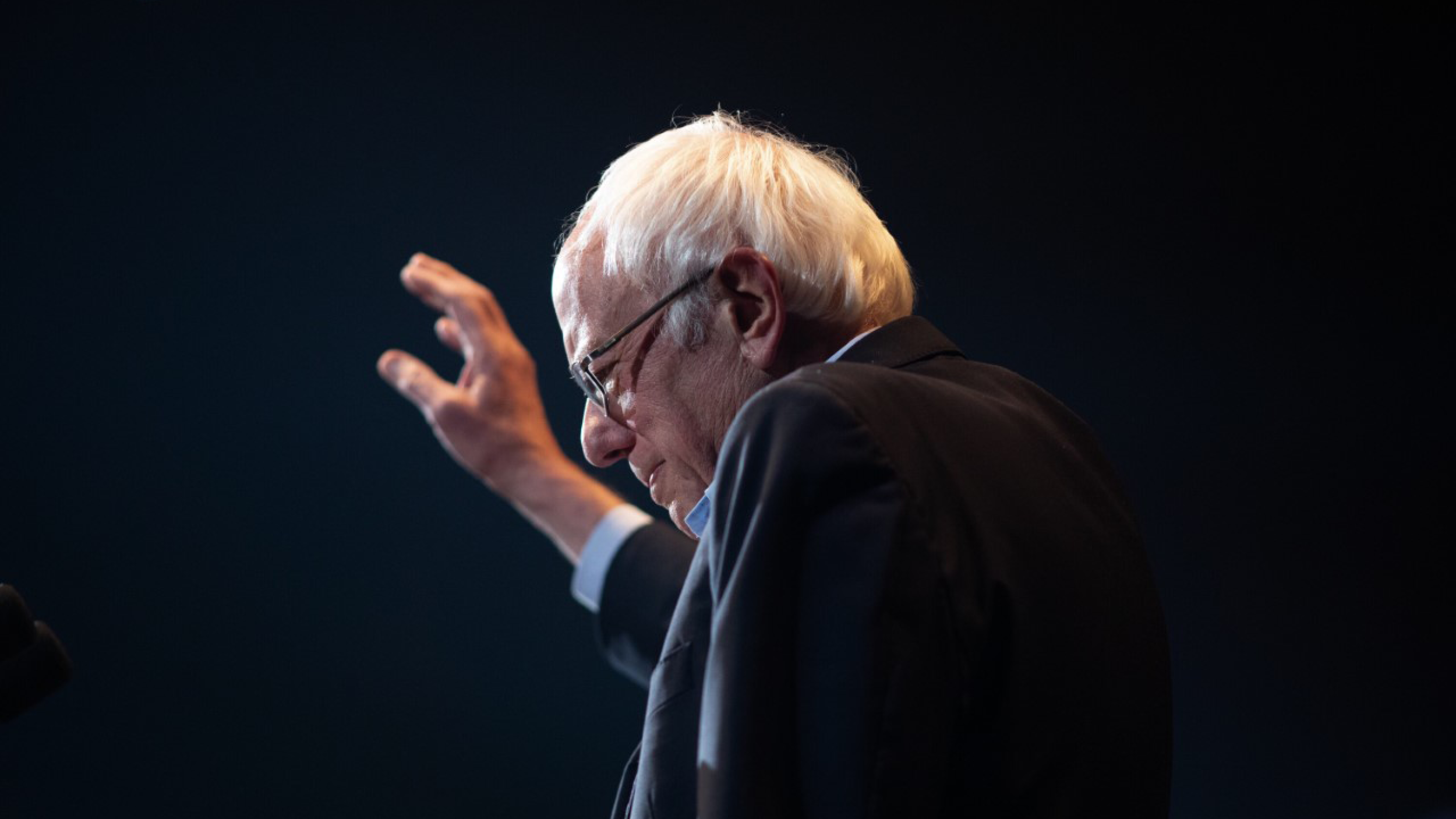 Madison Hoffmann ’20, who transferred to Hussman from UNC-Greensboro and ”fell into the vizcomm tunnel” after one photojournalism class, shared that prior to the trip, the class had focused on ethnographic research training, gaining experience by doing mock interviews followed up by detailed notes. In Iowa, she found that photojournalism skills — how to frame a photo, look at a situation differently, look for details like how your subject’s body is positioned and where the lighting is coming from — have prepared her well for the observational skills required of ethnographic research. Her photos from a Bernie Sanders rally and of classmate Vanessa Schoning ’20 interviewing Democratic voters at a Grinnell College caucus site Monday night are included here.

Associate Professor Daniel Kreiss was pleased with the diverse venues and audiences the team was able to pack into their visit, from a small Yang rally in a Fort Dodge brewery; to a union hall pitch at a middle school gym by Joe Biden; to several hundred Iowa citizens to an energetic Warren rally on a Des Moines high school campus with more than 1,000 attendees; to a Sanders rock concert/rally featuring the band Vampire Weekend in a packed Cedar Rapids Cellular Center.

Kreiss noted that In the coming weeks, the quantitative portion of the research class will allow students to develop a codebook to identify presidential candidate appeals through digital political advertising, including mis/dis information, identity-based, candidate image, and policy appeals. The plan is to have students analyze a dataset of presidential digital campaign ads to empirically document digital advertising strategies.

“Joe and Daniel have worked hard to give these talented seniors on-the-ground political communication strategy experience. There is nothing like being there!” said Dean Susan King. “I’m delighted that an anonymous alumna donor with an interest in immersive student experiences stepped up to make this opportunity available to our students.” ◾️

Throughout the course of the trip, the tables turned on the Hussman undergraduate researchers. Multiple media outlets talked with seniors Taylor Doggett, Amelia Fox, Hanna Grimm, Madison Hoffmann, Molly Horak, Vanessa Schoning, Allison Smith, Lucy Smith, Miranda Veal and Talia Wlcek to get their take on the Iowa caucus goings-on and the 2020 Presidential elections in general, from Deutsche Welle (Allison Smith ’20 at right below, at an Amy Klobuchar Super Bowl watch party on Sunday night) to the New York Post; RealClearPolitics to Messenger News. 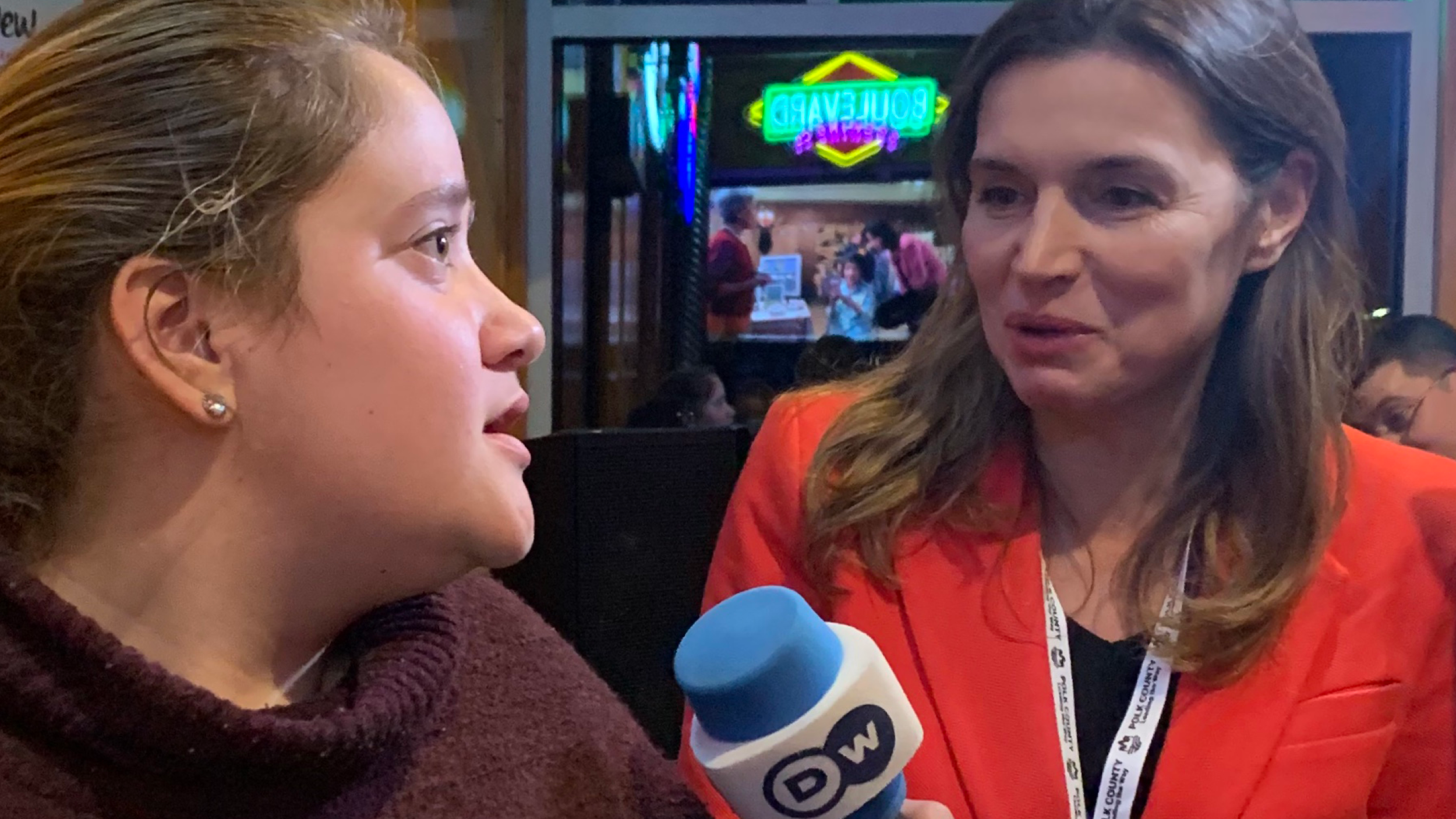