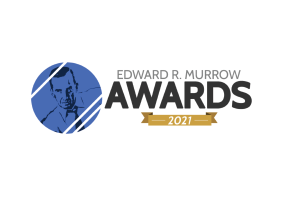 The Radio Television Digital News Association is recognizing the work of UNC Hussman School of Journalism and Media students with two of the eight national student Edward R. Murrow Awards this year.

Erin Jenkins ’21 won the Murrow Award for Excellence in Video Hard News for “Child Brides? North Carolina has a problem”  video that she produced in the school’s Media Hub course as part of a multimedia package.

The awards recognize outstanding work by student journalists, and national award winners are selected from among entries submitted from across the country.

Scroll down on the image below to listen to the winning Carolina Connection broadcast.

“This win means that our students are talented, and their work is up to the highest standards, not only of student journalism but of professional journalism,” said Adjunct Instructor Adam Hochberg, Carolina Connection’s adviser. “I am always proud of the students and always in awe of the talent they bring.”

“There are two or three icons of the broadcast industry — Edward R. Murrow is one of them,” said Senior Associate Dean for Undergraduate Studies and John H. Stembler Jr. Distinguished Professor Charlie Tuggle. “To win an award with his name on it is special.”

The award is certainly special for Jenkins, pictured above, who is now working as a reporter for WNCT in Greenville, North Carolina. Growing up in western North Carolina, she dreamed of a career in broadcast journalism and a chance to “tell untold stories and create some change in the world.”

Her video explored North Carolina laws that allow minors to marry with parental consent. Ramishah Maruf ’21 penned an article, and Julia Johnson ’20 produced a graphic for the multimedia package that included Jenkins’ video.

Media Hub creates a capstone experience for students from all of the school’s disciplines who find, produce and market stories with state, regional and national appeal.

“My story’s subject matter was something I was not aware of, and I found that a lot of North Carolinians were not aware of it either,” Jenkins said.

Media attention surrounding the issue has made more people aware of the problem, Jenkins said. Recently, North Carolina lawmakers voted to raise the legal age of marriage in the state from 14 to 16.

Jenkins credits the Media Hub experience for the award-winning work, but also preparing her for her current professional role.

“The thing that I really learned working on this story is that if you personalize a story for people, it brings the issue home for them,” she said. “To have a win like this beside my name is just surreal.”

The 2021 Edward. R Murrow Awards will be celebrated in New York City on Oct. 27.