UNC Hussman welcomes industry leaders to its foundation board 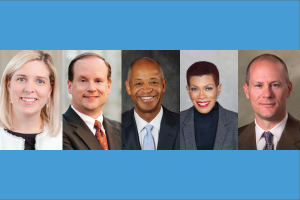 “The Foundation Board has been a game changer for UNC Hussman’s creative and financial future,” said Susan King, dean of the school. “These five leaders are all closely tied to the school and yet bring diverse experiences and business expertise to our board leadership. We will be richer for their advice and guidance.”

Gaines, of Little Rock, Arkansas, serves as managing editor at the Arkansas Democrat-Gazette where she previously worked as WEHCO Media’s vice president of audience development, serving the Democrat-Gazette and other newspapers operated by the company from 2015-20.

She is the first woman to lead the newspaper founded in 1878. Gaines was a fundamental part of the newspaper’s two-year effort to convert from a print edition to a digital replica. She has also served as executive editor for Hot Springs On the GO! magazine and the Sentinel-Record in Hot Springs, Arkansas. Gaines earned her undergraduate degree in English from Carolina in 2009 and her master’s in journalism at UNC Hussman in 2012. Editor & Publisher magazine named Gaines as one of its “25 Under 35 2021: The Next Gen of News Professionals” list.

Hood is president of the John William Pope Foundation, a Raleigh-based grantmaking organization that supports public policy organizations, educational institutions, arts and cultural programs, and humanitarian relief in North Carolina and beyond. Hood is also chairman of the board at the John Locke Foundation (JLF), a North Carolina think tank that issues reports, hosts events, produces broadcast programs and publishes Carolina Journal. Hood helped found JLF in 1989 and served as its president from 1995 to 2014. Hood currently serves on the University of North Carolina at Chapel Hill Board of Visitors.

Since 1986, Hood has written a syndicated column on politics and public policy for North Carolina newspapers. He serves as a weekly panelist on “NC SPIN,” a political talk show broadcast statewide on both PBS North Carolina and commercial radio stations. Hood received his B.A. in journalism from UNC Hussman in 1988. In 2018, he earned an M.A. in liberal studies and a graduate certificate in nonprofit management from UNC Greensboro.

Keyes is a 1975 undergraduate alumnus and earned his Ph.D. in communication studies in 2018 — both from UNC. He has been honored with the Mac A. Stewart Distinguished Award for Service from the Todd A. Bell National Resource Center; the Dr. Asa G. Hilliard Model of Excellence Award from the College Board; and the Warrior Award at the 2017 International Colloquium on Black Males in Education. Keyes also served on the UNC Board of Trustees and on the UNC Hussman Board of Advisers.

Riley has served as the director of arts and culture for the City of Detroit since May 2019 after nearly two decades as a columnist at the Detroit Free Press. She began her career as a reporter for The Washington Post in 1987, then worked as a senior writer and assistant city editor for the Dallas Morning News from 1989 to 1992. She worked at the Courier-Journal in Louisville, Kentucky, for eight years as a columnist, associate editor and deputy managing editor.

Riley received a bachelor’s degree in journalism from UNC Hussman in 1981 and  a master’s degree in 2008 from the University of Michigan, where she was a 2007 Knight-Wallace Fellow studying social media, film and creative writing. She is the author of “The Burden: African Americans and the Enduring Impact of Slavery,” and co-author of “That They Lived: African Americans Who Changed the World,” a collection of essays and photographs. Riley was recognized with the National Headliner Award for best local columns in 2019, and she was named the 2010 Harvey Beech Outstanding Alumna at UNC. Riley was inducted into the Michigan Journalism Hall of Fame in 2016 and the N.C. Media & Journalism Hall of Fame in 2019.

Scott is a senior managing director of Blackstone and president of its GSO Capital Partners global credit investment platform, one of the largest alternative asset managers in the world. Scott oversees management and sits on the investment committees for the company’s energy funds.

Prior to joining Blackstone in 2005, Scott was executive vice president and chief financial officer of El Paso Corporation. He served as managing director in the energy investment bank of Donaldson, Lufkin & Jenrette between 1996 and 2000. He is a director of FourPoint Energy and GEP Haynesville and serves on the boards of Wall Street for McCombs and Trout Unlimited.  Scott received his undergraduate degree in journalism at UNC Hussman in 1985 and his MBA from the University of Texas McCombs School of Business in 1989.

About the UNC Hussman School of Journalism and Media Foundation

The UNC Hussman School of Journalism and Media Foundation serves as the guardian and builder of private resources to support teaching, research and service. Board members provide fiduciary oversight of the Foundation’s assets and steer the school toward a sustainable future with adequate resources by adopting sound ethical and legal governance and financial management policies.