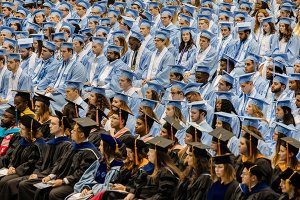 Over 30 UNC Hussman students joined the more than 1,500 Carolina graduates embarking on their next chapter this winter. Some were graduate students returning to professional life, while others were taking their first steps into the career world.

"Our winter 2019 graduates are the first to graduate from the UNC Hussman School of Journalism and Media," said Susan King, dean of the school. "We are so proud that they will carry our values forward as they embark on the next phase of their lives and careers."

As they start on that journey, some of the graduates reflected on their time at Hussman and offered words of advice for students who still have graduation ahead of them.

Myah Ward credits Hussman faculty with starting her on an incredibly successful path in journalism. Though she came to UNC planning to go to law school, faculty member Ferrel Guillory’s class on media and politics during her first semester led her to Hussman. Many of her professors suggested she write for The Daily Tar Heel. She did, eventually holding leadership positions including university editor during one of the most controversial years on campus — and finishing her tenure at the DTH as director of enterprise. She said the paper turned her love for writing into “something real” and led to an internship at The Charlotte Observer. At Hussman, Ward’s professors helped shape her writing. “John Robinson, the greatest mentor, spent many hours editing my writing and helping me with my craft,” Ward said. “I’ll never forget going through my first story in his feature writing class. It was the first time I felt like a writer.”

She later interned at Bloomberg News. And then Robinson urged her to take advantage of a New York Times freelance opportunity after the April 2019 shooting at UNC-Charlotte. “It was some of the hardest reporting I’ve ever done,” Ward reflected of the assignment. “And it shaped me as a journalist.” It also led to another national story in the Times this winter, and Ward will leave UNC with an internship at Politico’s breaking news desk in Washington. These opportunities came about partly, she said, because of Hussman professors “who believed in me and knew what I was capable of long before I did.”

“Go to office hours. Take the time to know your professors,” Ward urged. “They are experienced, talented, passionate and driven people who want to help you. When they say take an opportunity, go for it. It might be scary at first, but I promise it will be worth it.”

“You’re on your own timeline”

Nicholas Byrne built a career working for the likes of Kacey Musgraves, Rihanna, Keith Urban and Luke Bryan from foundations he learned at Hussman. Byrne, who has also produced and edited videos for Roc Nation, Budweiser and Rolling Stone among others, said “I found my niche at Hussman at the intersection of art and advertising.” During his time at UNC, he took a semester off for a digital marketing internship with Universal Music Group Nashville, followed by an electronic music course in Berlin. Back in Chapel Hill his senior year, he started an independent study with faculty member John Sweeney that focused on building and marketing an audio/visual electronic music show, Office Hours, in Chapel Hill. He worked on DJing, booking concerts, and building stage design — and by the end of the year he was able to play a Friday night show at Cat’s Cradle in Carrboro. Byrne believes he has an advantage over his peers in the music industry because of Hussman, particularly highlighting real-world experiences like the FashionMash program. “My classmates and my professors taught me to be strategic, organized, and visual when finding a solution for a client,” he said. “I know that it has been a great benefit to me to learn alongside friends of different disciplines; it gives me a unique strategic perspective when interacting with people in the music industry.” Byrne even enjoyed debates with his friends at the school, noting, “UNC students love to argue, but I think that being surrounded by peers who seek truth and ways to be better citizens made me more thoughtful and intentional in my actions.”

Now Byrne is focusing on music, planning to record and release an EP and setting up a music and visual arts studio in Athens, Georgia — as well as continuing to work with Universal. Like many winter graduates, he urged fellow Hussman students to try to relax and enjoy their time at the school: “Don’t compare yourself to business students who have jobs lined up a year before graduation. You’re on your own timeline, and you will get a job.”

When Andrea Martin ’02 moved into a public relations role after working in journalism for 11 years, she began to feel that she needed to go back to UNC and learn even more. She returned to UNC Hussman for the online graduate certificate program, and then for her master’s degree via the school’s online M.A. in Digital Communication. Martin, who completed the program this winter, wrote her thesis about an issue many journalism graduates will face: the local newspaper journalist-audience relationship. After working at outlets like the Greensboro News and Record and Durham Herald Sun, she was interested in how the recent political climate online affects audience feedback, and how that feedback affects journalists in turn. Martin said she found the master’s program so rewarding because of the way it brought the Hussman network together. “I really valued the high level of thinking and discussion that we were able to have between our classmates, among our cohort and with our professors around issues in digital media right now,” she said.

But the program was not without its challenges. Martin juggled family life, studying at Hussman and maintaining her full-time job as director of strategic communications for Duke University’s Department of Family Medicine & Community Health. Her takeaway from the rigorous online master’s degree was that students must have support in all areas. Her employer and family were both supportive, and Hussman faculty were also particularly helpful. “They’re all working and have families and also know that our program is for working professionals,” she said. “They have always been there to give me a pep talk when needed.” Martin knows her fellow master’s students will feel relief at scaling back when they graduate, but she urges them to remember that they have a whole new set of skills now. She is focusing on keeping the conversation and connections going. “One of the best things I’m going to take away is this new network of colleagues and professionals,” she said.

“Don’t check out just yet”

Jamey Cross “fell in love with the Hussman school” as soon as she got to UNC. She came to Chapel Hill knowing she was interested in writing but unsure of where her path would lead. But as soon as she started to write for The Daily Tar Heel and take classes at Hussman, Cross was drawn to local journalism. She’s most proud of the work that took her into the Chapel Hill and Carrboro communities. Her public affairs reporting class at Hussman first got her into covering education and budgets in local schools, which she continued to pursue at the DTH.

But her independent work was shaped by the Hussman faculty. “One thing Hussman school does really well is real world experience. I was never writing fake stories; I was actually interviewing people,” she said. “I’ve had a lot of really wise professors who have been really supportive. They’ve given me confidence in myself,” Cross said. John Robinson’s classes in particular gave her a strong writing process and trust in her work. “I can trust his opinion more than I trusted my own harsh judgment of myself,” she said. Deb Aikat also supported her throughout the challenges of school and, "I just want to make him proud."

As they look ahead to graduation, Cross wants students to remember the opportunities that are still ahead at Hussman. “Don’t check out quite yet. In these last classes, you’re gonna get to produce a lot of really good journalism,” she said. “Don’t get too focused on the future, still experience that last semester.” Cross leaves the school with a bright future ahead and good advice for everyone looking ahead to a new year: “It’s a chapter that’s closing, so complete the chapter. Don’t skip ahead too fast.”

“You’re more prepared than you think you are”

Diane Adame understands the anxiety of looking for a job while dealing with school. Adame, who comes from a military family, spent her senior year of high school in Belgium and then moved to North Carolina to attend community college for two years. Eventually she recognized that her love of documentaries and investigative journalism meant she wanted to focus on giving people a voice. Once she started at Hussman, Adame says journalism felt right, and she never questioned it. But she was still apprehensive about graduating. That changed when she participated in the Fall 2019 career trek to New York. There Adame saw professionals in action. “I knew I was ready to be in the newsroom and start my life,” she said. Adame realized that her time at Hussman had prepared her well, particularly her trip to Colombia for the Uprooted project, which gave her the skills to deal with difficult topics and stories and still report. “With the opportunities that the school offers, they’re always working to make our futures successful,” she said. “You’re prepared more than you think you are. The Hussman school has given you the skills to take on this next chapter of your life.”

During the job-search rush, Adame got valuable advice from Hussman faculty and staff. As stress from exams and applications built up, Career Services Director Jay Eubank told her to take time with her applications — that the jobs would still be there when she was ready. And her favorite phrase came from Deb Aikat, who said “a job needs you” as much as she needed a job. Adame, who is moving to Washington, D.C. to work on the education desk for National Public Radio, found a job that needed her.

“Make the last semester a special one”

Samuel Mao appreciated the breadth of options on offer at Hussman. An international student from Taiwan, Mao started as a journalism major but grew interested in the business aspect of media. He has a second major in economics, and he found that the advertising classes at Hussman dovetailed perfectly with his other interests. “I love how we have such a diverse array of concentrations within the Hussman school,” Mao said — “during your core classes, you get to meet people from all disciplines of the school, and really figure out what you want to pursue and what interests you.” Mao is continuing his studies at UNC for one more year in the Master of Accounting program at UNC Kenan-Flagler in June and working at Costco in the interim. He believes Hussman prepares its students well for the professional world because “because a lot of our classes are project-based and require you to work in groups. This setting really sharpens your teamwork and communication skills.” Mao also appreciated that “you get to make connections with great people from other concentrations and have them teach you their craft as well.”

For students graduating in the spring, “try to have a lot of fun in your last semester, and don't stress out too much,” Mao said. “You only get to graduate college once, so definitely make the last semester a special one with cool experiences.”