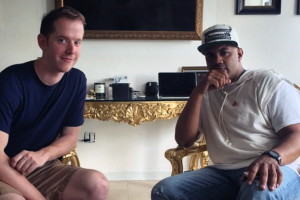 In high school I learned chemistry, biology
But not how to cope with anxiety
Or how I could feel like I’m by myself on an island with depression on all sides of me (Damn)
—Deep Reverence (feat. the late Nipsey Hussle) by Big Sean

(Alex Kresovich and Lenny S. at right courtesy of Kresovich)

A study released today in JAMA Pediatrics suggests that current rap hits are significantly more likely to include lyrics about depression, suicide and general mental health struggles than ever before. Lead researcher Alex Kresovich is a Roy H. Park Fellow Ph.D. student at UNC Hussman School of Journalism who studies rap music from a health communications perspective. He applies his deep roots as a music producer, songwriter and composer and his personal insights with anxiety to his ongoing data gathering and analysis.

The findings by Kresovich, Park Fellow Ph.D. student Meredith K. Reffner Collins and faculty members Francesca Dillman Carpentier and Daniel Riffe highlight the need for additional research into what the consequences – both positive (reducing mental health stigma and encouraging help-seeking) and negative (glamorizing depression or suicide) – of listening to songs with these mental health references might be for rap music listeners, especially among their largest audience, U.S. teens and young adults.

W. Horace Carter Distinguished Professor Francesca Dillman Carpentier said, “This research reveals the tip of an iceberg which I think will lead to harnessing an incredibly powerful asset that will open up conversations about mental health across age, economic and cultural divides.”

Dillman Carpentier continued, “Think of a society that embraces discussions of mental health and equips people at a young age to understand the links between their feelings, their thoughts and their physiological responses to stress and perhaps even learn important detection and coping skills that will support them throughout their lives. Popular music plays an immeasurable role in bringing people together and giving people ideas to discuss and debate.”

From making beats to dissecting data

Lead researcher Alex Kresovich and his twin brother were born in 1986 in Texas to a plant geneticist dad and a developmental psychologist mom. He was diagnosed with Generalized Anxiety Disorder in third grade. Kresovich developed a passion for music in his early years in Peachtree City, Georgia, calling music his “most consistent escape” from anxiety. He sang in local choirs and studied piano for six years, moving to drum lessons as his interest in rock music grew. When his family moved to New York state, he dove headlong into writing rap music, releasing an album called “I Wouldn’t Buy Thi$” as a senior at Ithaca High School.

As a communication student at Cornell University, Kresovich began producing rap songs. In his sophomore year, he landed an internship with Island Def Jam Music Group. He spent the summer of 2006 in Los Angeles working with the Def Jam’s publicity department and the next summer in A&R (artists and repertoire) with then-Vice President Lenny “Lenny S.” Santiago (now Senior Vice President of A&R at Roc Nation) — rapper and businessman Jay-Z’s right hand man. Lenny S. encouraged Kresovich’s own work on the mixing board and helped open the doors to experiences like a Jay-Z rehearsal and the opportunity to work with many artists.

“I knew I could ask her to dance,” the researcher remembered, “because I am a good dancer. I assumed she’d say no, which would’ve been a great story, too.”

Instead, he says he found himself starry-eyed and dancing to live Lionel Richie music with the singer from Barbados, catching glimpses of Usher, Mariah Carey, Serena Williams and Jay-Z and Beyonce whirling around them on the dance floor.

He continued to pursue his rap dreams, releasing “The Crowned Prince” in 2007 to some acclaim, receiving national airplay. In the meantime, Kresovich enrolled in graduate school at the University of Georgia, where he earned a master’s degree in mass communications/media studies in 2012.

He entered a record producer contest that guaranteed placement on the NBA 2K12 video game. His entry won the popular vote and the instrumental made its national television debut during Game One of the 2011 NBA Finals, which Kresovich learned when his mobile phone went crazy the night of the Mavericks vs. Miami Heat game.

“I missed the song live because my Mom was watching Glee,” said Kresovich. “I was about to switch over when my phone started going crazy.”

Kresovich signed with music lawyer Adam Zia and saw a rap production deal come close and then go while still in Athens, Georgia. When it fell through, he moved in with his parents (now in Columbia, South Carolina) after grad school.

He spent a year making $8.50 an hour at J.C. Penney in Columbia before taking his attorney’s advice and moving to Los Angeles to work on his music surrounded by record labels there.

From 2014 to 2017, Kresovich worked hard writing music, producing rap songs, networking with industry leaders and waited for his dream to come true. It was a tough road.

“L.A. was very competitive and I experienced many highs and lows there. I struggled with my own mental health there. The music industry can be tough,” said Kresovich.

Ironically, he started becoming as successful as he’d hoped just after he decided to leave the West Coast to be closer to friends and family and to find a simpler life and meaningful work on the East Coast. “King of the Clouds,” a song he’d worked on with Panic! At The Disco producer Jake Sinclair, hit it big in June 2018, months after he’d left L.A.

It felt like a parting gift. Kresovich explained, “That told me, ‘Hey, you put in enough work. It’s a heartbreaking business. You earned this one.’ It allowed me to never look back.”

Coming to Carolina with a question

Settling into the Triangle area of North Carolina where both his brother and best friend had relocated, Kresovich decided to return to graduate school, applying only to Carolina. He hoped that UNC Hussman’s Roy H. Park Fellowship could help him do meaningful work at the place where health communications and the music industry intersect.

Kresovich came to Carolina with a question that had formed the summer before he started. While driving with a friend and listening to Kodak Black’s “Tunnel Vision,” his friend shared a personal thought.

“I think I might need to go to therapy,” said his typically emotionally reticent friend, who opened up about how some of the messages he was hearing in rap music about struggling with systemic racism as a Black American man really resonated with him and were making him think about reaching out for help, despite growing up in an environment where mental health was not discussed.

The new Ph.D. student asked himself if anyone had ever studied the link between rap and mental health.

Kresovich knew that psychological stress and suicide risk have markedly increased over 20 years among people in the US aged 18 to 25 years; and that young Black/African American males, and US adolescents generally, are among the least likely to use mental health services.

He wondered: could rap artists, and pop artists more generally, who talk about anxiety, depression, suicidal thought and other mental health issues in their work potentially be a therapeutic avenue, a way for struggling young people — perhaps particularly young Black men — to articulate their own lived experiences, regulate their emotions, form their own identities and connect with peers through music as he had and continues to do as a rap listener and producer?

It was a fall 2018 MEJO 701 “Research Methods” class with retiring (Dec. 2020) Richard Cole Eminent Professor Daniel Riffe that helped crystalized Kresovich’s ideas; and a spring 2019 MEJO 861 “Content Analysis” class with the eminent scholar that furthered the research that would eventually appear in JAMA Pediatrics.

Kresovich and his Park Fellow colleague Meredith K. Reffner Collins analyzed lyrics from the 25 most popular rap songs in 1998, 2003, 2008, 2013, and 2018. During these 20 years, rap music became the most popular genre in the United States. At the same time, the youth suicide rate climbed to its highest point since 1960.

“My study can’t speak to positive or negative yet,” said Kresovich. His continued research on the topic asks “Could these artists and songs be really powerful in mental health interventions with young people? Could they help reduce the stigma around mental health and getting help?”

Studies show that celebrity disclosures of mental health can help. Could rap artists use their influence with young people to have this kind of positive effect? An upcoming Kresovich article in the journal “Health Communication” looks at rap and pop music through a similar mental health communications lens, as does his dissertation work.

The JAMA Pediatrics article coauthored by Kresovich, Collins, Dillman Carpentier and Riffe is already getting attention in coverage from Yahoo Entertainment to the Daily Mail today.

Travis ‘Yoh’ Phillips, an influential music critic who wrote “Best Damn Hip Hop Writing: The Book of Yoh,” said, “It's extremely important to recognize how hip-hop and rap perspective has evolved. The music has grown into being the most popular genre of our time. The perspectives coming from these artists on mental health is getting deeply personal. That feels very progressive. As we continue to move forward, we’ll continue to have artists feel comfortable telling their stories. We'll have better mental health conversations when popular artists talk about it.”

“I understand this message is not the coolest to say
But if you down to try it I know of a better way...
Meditate”
—FRIENDS, by J. Cole