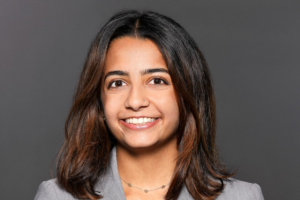 With the fall semester underway and class and work schedules consolidating, now might be the time for new UNC Hussman students to “find their people.” To that end, we’re profiling a series of student leaders and the interest groups they represent. Part 3 in our series: Coulture magazine Co-Editor-in-Chief Nupur Shah ’22.

Nupur Shah ’22 plans to graduate this spring with a degree from Kenan-Flagler Business School in one hand and Coulture magazine Issue 13 (fall/winter 2021) and Issue 14 (spring/summer 2022) in the other.

The editor in chief of the award-winning fashion and lifestyle magazine — with co-EIC Alex Berenfeld ’22 and Creative Director Hannah Griffin ’22 — has volunteered with student-run Coulture magazine since her first year at Carolina.

Shah, Berenfeld and Griffin manage over 200 student contributors (not counting models), a majority of whom are students in the UNC Hussman School of Journalism and Media.

“I fell into this leadership role as a happy accident,” said Shah, who has a management consulting position with Insight Sourcing Group lined up after graduation.

Shah is the first business major ever at the helm of the ambitious media project now in its sixth year of operation. The editor in chief of her high school paper, Shah decided to try her hand at magazine publishing, joining Coulture as an arts writer in her sophomore year at Carolina.

Today, Coulture’s reach extends beyond a biannual print issue with a robust digital and social media presence, particularly on Instagram.

The upcoming Issue 13 focuses on a secret theme that Shah will not divulge. She hints that the fall/winter issue strives to capture the goal of fostering inclusivity codified in the magazine’s mission statement.

“We want to make everyone feel included,” she emphasizes, adding “Fashion can be a scary and intimidating world to walk into. Some students felt that way about Coulture initially. Myself included, in my second semester at Carolina! But we’re going to change that. That is our biggest goal.”

Former Robertson Scholar Alexandra Hehlen ’18 founded Coulture in 2015 with the goal of promoting a wider idea of beauty. She had a Kickstarter campaign and the help of former business journalism professor Chris Roush. UNC Hussman Professor of the Practice Dana McMahan quickly stepped into an advising role as well, and was able to help fund future issues under the auspices of her Workroom: FashionMash program, which took flight after a 2016 $1 million grant from the Goodwyn Family Foundation.

Hehlen went on to earn a master’s degree in fashion, film and photography from Paris College of Art. Currently, she’s an art director at marketing and advertising firm Air Paris.

In the footsteps of the magazine’s founder and the editors in chief up to and including Nupur Shah and Alex Berenfeld, be ready to push the envelope and shift the culture and the narrative of what a fashion and lifestyle magazine can be. And get ready to feel the love!

“We try to be loving to everyone that walks through our door,” said Shah.