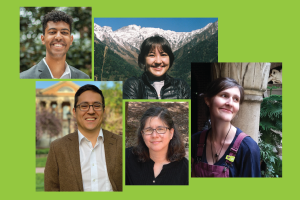 Among UNC Hussman’s graduating students are those honored with outstanding graduate awards and other superlative awards as they turn from being students to being alumni of the school.

Richardson, a native of Bailey, North Carolina, called the award a wonderful surprise and a nice endnote for his graduating year.

“I really, really did not expect it, but I always try to leave some sort of positive impact wherever I go,” said Richardson, who hopes to take a job in sports marketing or coaching basketball after he graduates.

While the two career choices may seem divergent, they both involve his deep love of athletics, which connects to many of his best UNC memories, from playing on the university’s JV Men’s Basketball team to his mentorship from Distinguished Professor in Sports Communication John Sweeney, who was among the faculty who nominated Richardson.

“Invest in building relationships with your professors,” Richardson said of advice he’d give students. “We have some of the best faculty on campus.”

Richardson called Sweeney key to his success at Hussman.

“Marcus impressed a number of different faculty who all nominated him for the award. I was one of those who supported Marcus,” Sweeney said. “He is a serious and capable student. His attitude is positive and professional. There is something distinctive about Marcus.”

For Davison, an award from UNC Hussman, an institution that has been part of her life even before her time as a student, is especially sweet.

“The foundation of my UNC experience has been the journalism school. Also, I grew up running around Carroll Hall even before I became a student,” said Davison, whose father Pat Davison, a longtime professor at the school, taught many of her classes at Hussman.

Like her father, Davison specializes in videography. This summer, she’ll work an internship with The Washington Post’s video team. Among her many accomplishments at Hussman, she won the individual multimedia national championship in the 2021 Hearst Journalism Awards for her project “Wild Heart,” which explored a young LGBTQ+ man’s acceptance of himself.

“I love video because it’s a powerful tool. It allows you to really include the person’s voice in the story, and it’s a medium you can really be creative with,” Davison said.

“Anybody who wins a Hearst is doing excellent work. Hope is among the best in the school,” Tuggle said.

Foster will complete her master’s degree this summer and plans to pursue a Ph.D. in communication at Cornell University.

“I'm deeply humbled and honored to receive this award,” Foster said. “I attended UNC to gain a strong research methods background and to study social media, but my favorite thing about UNC is the people, by far. There's a true spirit of community here that I've cherished during the pandemic and beyond.”

“Maggie was already such an amazing applicant to our program, and she has continued to thrive here, even under these most difficult circumstances of the last couple of years,” Friedman said. “She reads deeply, thinks deeply and brings her full self to every conversation.”

Friedman called Foster’s thesis — which explored the implications of #MeToo sexual assault accusations — one of the most ambitious she had ever read.

Miño said that upon completing his master’s degree at UNC Hussman in 2017, it was an easy decision to continue on to his doctoral studies at the school. In July 2022, he will join Boston University’s College of Communication as an assistant professor of public relations.

“I just knew that it was one of the best journalism schools in the country. One of my professors at my undergraduate institution back in Chile earned her Ph.D. from UNC. So, I knew about the reputation of UNC even as an undergrad,” Miño said. “It was easy for me to say yes to Hussman because of the incredible reputation of the school, the faculty who I would get to work with, and the amazing location in North Carolina which provides an affordable, yet exciting place to live.”

“We pride ourselves on graduating well-balanced individuals who have demonstrated excellence in research and teaching and who have contributed to our school and university through service,” Gibson said. “Pablo is strong in all these areas, and he has also contributed in significant ways to DEI-related initiatives in the school. He's done all of this with kindness and grace despite the challenges presented by an ongoing pandemic.”

“Soon after I completed the MADC program, I started a job search. I actually got an offer from the first application I sent out. I guess that shows the value of a Carolina degree,” Snively said. “I am now a content marketing manager at Relias in one of their healthcare verticals.”

Snively, a working communications professional with two decades of experience, had always planned to earn a master's degree but work and family commitments got in the way. The MADC program’s online format fit her busy schedule.

“The award is really nice, and my family is proud of me, but the real reward was the program itself. Since I'm a mid-career professional and parent of teenagers, going back to school was a big investment in me,” Snively said. “I proved to myself that it's never too late to gain new skills, find a new goal and learn from new people, both older and younger.”

“I nominated Elizabeth because of her remarkable ability to apply the conceptual and methodological tools of communication research to challenging problems,” Comello said. “Specifically, she looked at how colleges and universities talk about diversity issues, and whether there are ways to do so that support both the institution and society. The question was inspired by her professional work, but it's also a question that transcends any single workplace or industry.”