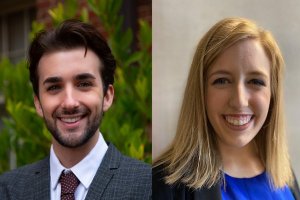 They join the 25 students who distinguished the school by taking part in the competition and earning UNC Hussman the overall championship.

“We owe a debt of gratitude to every one of our 25 students who put their talent, persistence and tenacity to work in the Hearst competitions this year,” said Susan King, dean of the school. “To accomplish what they have — with such excellence across the board in some very difficult circumstances — honors each one of them and their collective effort, distinguishes our school and invigorates our faculty. Every one of our students deserves to take a bow for their contributions to our school.”

Hearst announced on June 3 that UNC Hussman had won the overall championships for 2020. The school placed in the top three of all four awards categories. The 2020 championship gives Hussman five championships in the past six years and nine championships since 2002 — the most of any other school. The five Hussman finalists — Tysinger, Poe, Haro, Weber and Pruitt — advanced to the final round of individual competition last week.

The final round usually involves reporting assignments in a host city. But due to the COVID-19 pandemic, the championships were very different this year. Students didn’t travel and were asked to turn their reporting focus inward. Their assignments were to portray their own experience of coronavirus through the medium of their category.

That focus was “completely different from any story I’d ever done before,” Annabeth Poe said. But for the radio finals, she decided to lean into the personal theme. Poe has been dealing with the stress of the pandemic “new normal” by playing the piano. So she recorded the sounds of her day including her piano playing, and based the story around that music and the Beatles song “Let It Be.” Listen to her project here.

“Because it was so different, I second guessed everything while working on the story,” Poe said. “Ultimately, finishing the story was a big weight off my shoulders, and I would have been fine with only that.”

But she got a lot more. When the judges called to announce her first-place finish via zoom, Poe “immediately started crying.” She wanted to share the moment with her father, who has raised Poe as a single parent since her mother passed away when she was eight years old. So the judges waited for Poe’s father to come into the room and personally delivered the news to him as well.

“He also immediately started crying. We signed off and then we, for lack of a better term, freaked out,” Poe said. “We were so excited for the next few hours that we struggled to sit down, so all we could do was pace around the living room.”

Payton Tysinger, who won first place in television, also found the assignment challenging. “We had to be creative and think outside the bounds of a normal news package,” he said. “I let my heart and my creative side take control. It was a big leap.”

Tysinger, who usually focuses on hard news, spent the COVID-19 remote work period taking time to reflect on his life and connections. After a busy school year, he said he hadn't realized how much he’d lost connection with friends and family because of working so hard. So he focused on meaningful conversations with those close to him and returning to the roots of his passion for television by watching a lot of films. Those efforts, Tysinger said, led him to realize that he needed to take risks for the final project.

“I sat in front of the camera and looked at it as if I were looking at my best friend,” Tysinger recounted. “I added color and a level of emotion that I never have before.”

The judges responded, and told Tysinger that they loved his project because they got a real concept of who he was as a person. Watch the project here.

Tysinger, who found out he won while pulled over on the roadside after driving home from the beach, immediately called his mother. He said that his parents and family, though always supportive, had been worried about the pressure of a career in broadcast journalism. But after the Hearst competition he felt a new level of support from his entire family, who, as he put it, “screamed through the phone in excitement.”

He also found that support from faculty and the entire Hussman community. Tysinger said he received messages of encouragement from faculty throughout the final week, from Dean Susan King to the first teacher who taught him how to use a camera.

“It meant so much,” he said. “I have to say thank you to the school for such an amazing platform for us all to learn. I hope we make them proud.”

One of Tysinger’s teammates was a clear example of that supportive community. Cambria Haro, who took home third place in the television competition, said she and Tysinger relied on each other.

“While we were working on our pieces, we reached out to each other — bouncing off ideas and checking in. It never felt like we were competing against each other. It was really nice to be able to confide in him during this process, and I hope he knows how much I appreciated that.”

“I didn’t have the usual equipment — only my phone and laptop — so I had to think a bit more outside of the box,” she said. “I spend all my time on my laptop, so I decided to go with that approach — what I see on my computer and what it sees every day. It was an approach that I found a bit risky, but I decided to give it a shot...I had to juggle putting this together while working a full-time job, so I’m happy that the risk all paid off in the end.” Watch Haro's video here.

But Haro saved her praise for her teammate. “I’m just really proud of Payton. Like me, he took a different approach to telling his story, and it won him the daggum thing...He’s going to do big things. Just wait.”

Jared Weber won third place in the radio competition. Weber is a May 2020 graduate, print and audio journalist and former Carolina Connection producer. Weber took a topical focus with his piece, focusing on spending time outside for mental health and how access to those benefits differs with privilege. "My goal was to write a piece that incorporated both the pandemic and the protests, while also adhering to the personal essay prompt," he said. "Over the past few months, I've been walking, running and biking alone in my parents' suburban Chapel Hill neighborhood whenever I need to decompress. But for friends and family members of color, that same activity evokes wariness — especially in the wake of the murder of Ahmaud Arbery." Weber interviewed his housemate, who is a Black woman, and a mental health expert. You can listen to that piece here.

Weber said that he was honored to have come away with first place. But like the other UNC Hussman students, he focused on the team, praising Poe's radio win. "I'm so dang proud of Annabeth Poe for winning the whole thing," he said. "She's such an amazing reporter and I've learned so much from her over the past year at Carolina Connection."

Lucas Pruitt rounded out UNC Hussman’s individual finals team with a runner-up finish in multimedia. Pruitt, a photo and video journalist and experienced mountain biker, focused his project on his efforts to connect with nature and biking while public lands and trails were closed due to the pandemic. Find Pruitt's project here.

The competition as a whole was “a great experience because of the new connections I made, and I learned a lot from being a part of it,” Pruitt said.

Poe summed up the feeling of mutual support and gratitude from the school and Hearst participants.

“Above all, I feel incredibly grateful — grateful for the opportunity, the experience, my family, my friends, Carolina Connection, my Hussman classmates and professors  — the list goes on and on,” she said. “Even writing this right now, I’m tearing up. I do not think there are strong enough words to describe how much each and every person means to me. I would not have even made it past the first round without their endless support and encouragement. I said last time that I hope I make my family, my community and my university proud. I hope I did, and I hope to continue to for years to come.”