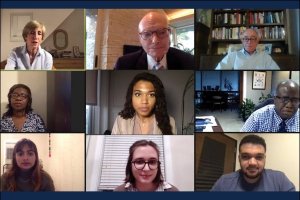 When UNC Hussman adopted its new name in 2019 it also enshrined core values on the wall of its school: impartiality, integrity, objectivity and truth-seeking.

Those values were codified by Walter E. Hussman Jr. ’68 along with UNC Hussman Dean Susan King. Hussman and his family made a transformative $25 million gift to the school last year. With that gift, the news industry veteran and WEHCO Media chair invested heavily in the future of journalism and the media professions and aimed to reinforce those values for the next generation of media leaders being trained at Carolina. The University recognized the investment by renaming the school.

As the last year of heated public discourse and logistical challenges progressed, UNC Hussman Dean Susan King and other school leaders went through serious consideration of how to impart those values to students in the new remote learning environment. King and Senior Associate Dean for Undergraduate Studies Charlie Tuggle focused on the values as a central priority for UNC Hussman graduates. This week, students witnessed the first step in the module Tuggle developed, with a “Foundations of Journalism” panel on the roles of impartiality and objectivity in news reporting.

Students were left with concrete takeaways from the industry-seasoned journalists on navigating the tricky media environment.

“Walter cares deeply about the need to rebuild trust between news organizations and the public. The public’s trust in news organizations has eroded in the digital and social media era,” said Susan King, dean of UNC Hussman.  “Often facts and opinion are interchanged and recent polls indicate the public has lost faith in newspapers and television journalism. His investment in our school is one effort to support journalism schools that will rebuild America’s trust in impartial news. “

While Hussman, Overby and others on the panel brought up declining trust in news, all agreed that there is a future for unbiased, objective journalism.

“Journalism may have changed in the last few years, but those core values stand true,” Hussman said.

All of the journalists present discussed how they interpreted the concept of objectivity throughout their varied personal careers. Cotton, a self-described millennial journalist, was keenly aware of the concerns of younger reporters. She outlined the responsibility of local reporting in a community that closely watched its news for any form of bias.

“You have to know the difference between objectivity, activism and bias,” she said.

Overby said the Freedom Forum was founded for that exact reason — to remind journalists of their responsibility. The Freedom Forum saw public distrust of the media and problems with bias and objectivity as “a serious threat to the First Amendment,” he said.

All the panelists reflected on that responsibility to readers. Charles gave the audience a behind-the-scenes look at the kinds of reactions journalists receive from readers on both sides of the aisle. In the end, she reflected wryly, “if everybody loves you, you’re doing something wrong.”

But her message was to focus on the reporting.

“You have to say, ‘I owe it to myself, to my readers, to get as many of the facts that are out there,’” she said.

The student journalists shed important light on the conflicts that many of their fellow Hussman students may face in today’s media environment. They pressed the panel on the thorniest parts of the objectivity debate, including the overlap of objective reporting and personal identity.

Standley, The Daily Tar Heel’s managing editor, asked whether focus on objectivity was preventing journalists from bringing their lived experience to reporting and enhancing their storytelling — a question at the center of the current media debate.

The panelists considered the question in depth, ultimately agreeing that lived experience could provide insights for reporting, as long as journalists focused on the importance of providing context.

“The problem with bias sometimes is what does not get reported,” Hussman said. “Part of our statement of core values is to follow the story, wherever it leads.”

Overby agreed: “One of the biggest contributors to bias is reporters approaching the story with preconceived notions.”

“I think first and foremost, we have to understand that we are journalists and by choosing to be a journalist, you have decided to give up certain rights, and that's a right to publicly put your opinion out there,” she said. “You have agreed to leave no stone unturned.”

Agnew acknowledged the challenge, saying he has faced it throughout his career. But he noted that “lived experience can be used for good.”

“I’m the son of Mississippi sharecroppers. The issues that affected my life over a long period of time in journalism are issues of poverty, issues of education, issues of access to health care,” he said. “So you can turn who you are and what you come from into good, not into bias. That’s what I've tried to do with my career.”

Ramishah Maruf ’21, who serves as both the arts and culture editor and diversity and inclusion office at the Daily Tar Heel continued Standley’s line of questioning about identity. She brought up the concerns that many young journalists of color may feel when their identity becomes part of the story, for example in covering the Black Lives Matter movement. Maruf asked the question, she said, because as a minority woman in journalism, the topic is personal.

“I think newsrooms across the country are facing a reckoning when it comes to objectivity, truth-telling and racial equality,” she said later. “It's important to have these conversations to improve our coverage of other communities, retain minority journalists and be the best truth-tellers we can be.”

Cotton said that as a young black female reporter, she understood Maruf’s question and that “this is a really hard one for me.” She agreed with Agnew that young journalists could use their backgrounds to gain unique insights. She advised that reporters grappling with the issue should focus on teasing out a story’s underlying issues in their coverage as much as possible.

“It's often what is not being reported that will speak volumes for your personal views,” she said. “So I always say ‘when in doubt, write it all out.’ You need all the context and all the facts.”

Charles added, “as long as you know you've done your job and you've done it fairly, I think you will move ahead.”

Cotton also stressed that social media posed one of the biggest challenges to her generation of journalists. She and Charles warned aspiring reporters to keep a close eye on their online presences. “Now is the time to change the ways you post and engage,” Cotton said.

But, the panelists agreed, that does not mean students should avoid thinking about their identities in their career. Rather, they should make the effort to understand their audience as deeply as possible.

“Good reporting means you’re getting inside your communities and getting a great knowledge of what people are thinking,” Agnew said.

Maruf was glad she asked the question. “It was very insightful to hear the experiences of the other minority panelists in the many years they've been working in newsrooms,” she said.

Daily Tar Heel Editor-in-Chief Anna Pogarcic channeled the concerns of many in the audience, noting that journalists face a constant struggle to convince audiences of their objectivity. “How can we get it right?” she asked the panel.

It may have been the hardest question for the panelists to answer, Pogarcic acknowledged, but she felt it was the most pressing.

“As young journalists, we are going into this overwhelming media field where everyone can find a version of their own truth,” Pogarcic said later. “We really want an answer to the question of what we can do to build trust.”

The panel agreed that audiences have so many options to find their own truth that it can feel like an uphill battle. Their advice was to develop a thick skin and focus on the reporting.

“That’s why it’s so important for you as a journalist to have core values that are the very inner core of what you do,” Hussman said.

“Just do your job to the best of your ability,” Agnew agreed. “Don’t apologize for your reporting. Just make sure it’s right.”

Though she said “probably no one has the perfect answer,” Pogarcic found the panel instructive for student reporters getting ready to enter the field.

Personally, she believes that it’s impossible for journalists to be unbiased, and she worries that fairness, objectivity and neutrality are sometimes conflated in the debate.

But that made the panel even more valuable, she said. As a student reporter, talking to experts who may disagree, “makes you think critically about why you think the way you do.”

“They are at different career levels and have such different experiences, but they all agreed on the principle of objectivity,” she said. “I get wrapped up in what students and Daily Tar Heel colleagues are saying, and it was important to hear how industry professionals think about this issue.”

Hussman emphasized that he knows the challenges and questions many students have to face. He sees UNC Hussman as a place to give them the skills to “make sure it’s right.” His goal is to establish a foundation of those four core values among Hussman students, and let them carry it into the journalism world.

“We have to start somewhere,” he said. “Where I thought we should start is here at UNC Hussman with a statement of core values. Hopefully we can spread them from here.”

“If the student reporters on this week’s panel are any indication, Walter’s goal is going well so far,” said King. “A broader discussion involving multiple journalism schools may be an interesting way to create an even larger community-focused examination how to rebuild the trust.”