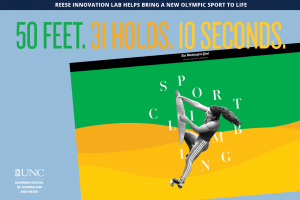 The Washington Post’s augmented reality interactive video presents a 3D view of what looks like Olympian Brooke Raboutou speed-climbing the walls of your office or living room, thanks in part to UNC Hussman School of Journalism and Media’s Reese Innovation Lab

Sport climbing is one of four new Olympic sports alongside skateboarding, karate and surfing to debut at the Tokyo Olympics this summer (July 23–August 8, 2021). Qualification rounds start in two weeks for climbers from around the world. The August 5 and 6 finals will combine three climbing disciplines: speed, boulders and lead.

So what’s it like to climb a 50-foot-tall (15-meter) wall with 31 holds in under ten seconds for the speed climbing part of that competition? Washington Post readers can find out by watching The Washington Post Lede Lab’s augmented reality (AR) and interactive video released today of 20-year-old American rock star climber Brooke Raboutou.

The Post’s in-house lab partnered with UNC Hussman School of Journalism and Media’s Reese Innovation Lab to produce the eye-popping climbing animation. The collaborators took hundreds of photos to build a life-like 3D model of Raboutou; then referenced video from some of her world-class climbs from various perspectives and used it to build an accurate 3D animation of her lightening-fast fifty-foot climb.

Recent UNC Hussman graduate Madison Walls ’18 was an in-house team member on the project. UNC Hussman graduate Peter Andringa ’20; rising junior Angelina Katsanis ’23 (seen photographing Raboutou, below); Associate Professor and head of the Reese Innovation Lab Steven King; and staffers Alexis Barnes, Spenser Morgan, Ben Riley and Forrest Blais all played a part on the project — which brings the climbing wall and an animation of Raboutou into the viewer’s living room or office wall in three dimensions (scan the QR code in story and try it on your mobile device, you’ll be delighted!). 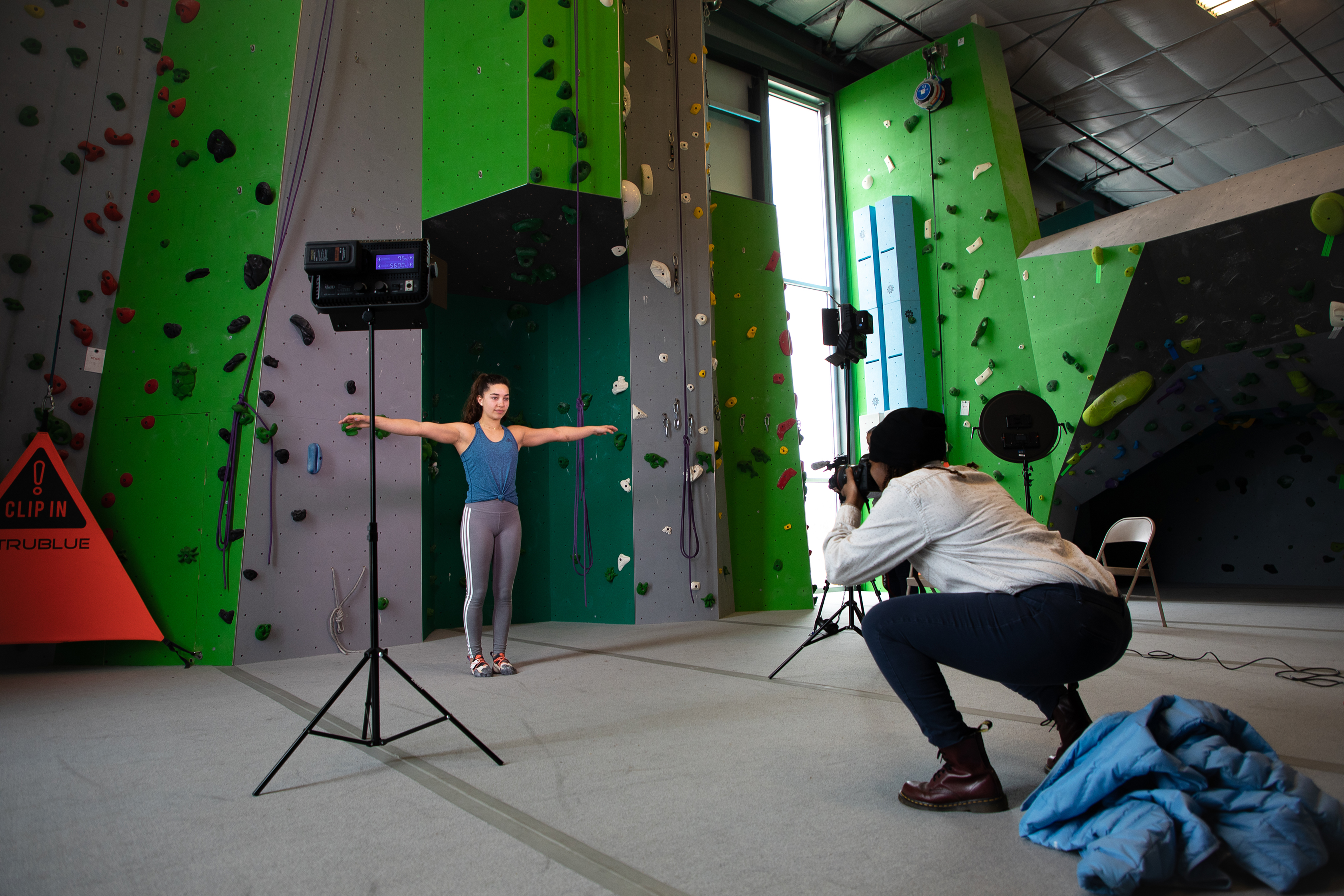 Work on the augmented reality project began in 2019 for what was at the time going to be the 2020 Tokyo Olympics. The games were delayed until this summer due to the COVID-19 pandemic.

The partership between The Post’s experimental Lede Lab and UNC Hussman’s cutting-edge Reese Innovation Lab proved to be a potent way to bring the technological innovations being developed at Carolina to life for the Post’s national and global audiences.

“We leveraged emerging technologies in a unique way to help The Washington Post tell a story in an innovative way,” said King, who pointed out another bonus of the collaboration: “One of the students that worked on this project [Peter Andringa, a Rhodes Scholarship recipient who double-majored in computer science and journalism] immediately took a job with The Washington Post team after graduation.”

Andringa, now a member of the news engineering team at the Post, was honored to play a supporting role in the the AR project. It was one of many other projects for The Post and other clients he had a hand in during his student days at Reese Innovation Lab. He says he relished the opportunity to experiment with what he calls the cutting-edge technology of building 3D models, animating and recording them, and then presenting them across devices.

“Most of that AR work around Raboutou’s speed climb was done 18 months ago at the Reese Innovation Lab,” Andringa recalls. “Now that I’m working at the Post, it’s fun to see the incredible work that fellow alumna Madison Walls and others here have done to integrate lots of different assets including our AR video — plus photography, video, writing and digital design — to create a really immersive Olympic experience for our readers.”

Raboutou, a lifelong climber from Boulder, Colorado, is the daughter of two world champion climbers who own a rock-climbing gym. She already holds three World Cup medals (a silver in lead and two bronze in bouldering). Raboutou says she started climbing around the same time she started walking. She spent the early part of the pandemic climbing the training walls, stairs and fireplaces in her parents’ mountain home—documenting some of those climbs for fans via her Instagram account @brookeclimbs, where she has nearly 200,000 followers to date.

The Olympic hopeful seemingly alternates between floating and flying as she speeds from hold to hold up the fifty-foot augmented reality climb. The speed climbing wall and its holds have been the same for the past 14 years, the Post reports — which allows athletes like Raboutou and her competitors to memorize a route and master it.

The Reese Innovate Lab team worked pre-pandemic from their downtown Chapel Hill office on Franklin Street to help produce the interactive media of Raboutou’s climb, and held weekly virtual meetings with the Washington Post staffers during its production. During the course of the project, Reese Lab student Katsanis and then-staffer Barnes, a 2017 UNC Hussman graduate who now works as a software engineer at the Post, even had the opportunity to travel to Boulder to meet with the young world-class climber.

“This experience marks the first time The Post has used motion capture in augmented reality technology, building upon past augmented reality still shots,” the Lede Lab reports. Happily, Carolina’s Reese Innovation Lab was there for the assist.