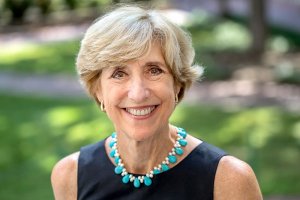 UNC Hussman School of Journalism and Media Dean Susan King has been honored as the 2019 Scripps Howard Administrator of the Year.

The award, a partnership between the Scripps Howard Foundation and the Association for Education in Journalism and Mass Communication, recognizes excellence in administration within journalism and communication programs.

King and Dean David Boardman of Temple University’s Klein College of Media and Communication were announced as finalists on February 25. A panel of veteran journalists and media industry leaders convened at the Poynter Institute for Media Studies to judge nominations — including King’s nomination from several UNC Hussman faculty.

“I am shocked and humbled by this recognition,” said King. “David Boardman is an exceptional, innovative leader, and it’s an honor to have been considered for this along with him.”

King said being named administrator of the year is a testament to the momentum and success of UNC Hussman’s students, faculty, staff and alumni.

“This award is another indication that the academic community and industry leaders on the national stage are noticing the innovation, the research and the leadership of our faculty across the disciplines of advertising, public relations and journalism,” said King. “I accept this honor on behalf of the entire UNC Hussman community.”

Under King’s leadership, the school has revamped its curriculum, expanded global and immersive learning experiences, strengthened ties and partnerships with industry, expanded its footprint and impact on campus and demonstrated national leadership in journalism and media education. She has been a prolific fundraising dean; the school has raised nearly $70 million toward a $75 million goal in the University of North Carolina’s ongoing Campaign for Carolina.

“Dean King is most deserving of this award. Under her leadership, the school has thrived amidst a tumultuous time in higher education,” said Senior Associate Dean for Graduate Studies Heidi Hennink-Kaminski. “UNC Hussman stands strong with reinvigorated graduate and undergraduate programs that prepare our students for what’s next. She’s demonstrated her commitment to research through the recruitment of top junior faculty, and her innovative faculty seed grant program has sparked extramural research activity totaling $17 million over the past five years.”

“It’s wonderful to see our dean is among the finalists for this prestigious award," Academic Dean Francesca Dillman Carpentier added. "Our school has been led through many changes and challenges over the recent years, and this leadership deserves to be recognized.”

The past year has been transformational for the school — receiving a historic commitment from alumnus Walter Hussman Jr. and family — and renaming the school with a clear commitment to long-standing core values in journalism and media. Construction is underway on a state-of-the-art media center adjacent to the school on UNC’s central campus — funded by the Curtis Foundation, which includes alumni Don Curtis and his daughter Donna Curtis McClatchey. The school also announced its partnership with the Ida B. Wells Society for Investigative Reporting, a national organization dedicated to increasing and retaining reporters and editors of color and educating news organizations on diverse voices. On top of this support, the school has built its strength across the country because of the Triad Foundation’s 20-year commitment to the school to build a graduate program that has graduated more than 450 Park fellows who are leaders in the media industry and the university.

“In one year, she’s overseen the $10 million dollar Curtis Foundation gift, followed by the $25 million dollar gift and renaming to UNC Hussman, along with her second accreditation process, and consistently pulling policies and procedures together to make us a lean, mean fighting machine,” said Senior Associate Dean for Undergraduate Studies Charlie Tuggle, who led the nomination. “Our students reward us with tons of accolades, and we thought it was time we turned around and recognized the dean for her hard work.”

King, who is also the John Thomas Kerr Distinguished Professor in the school, became dean on Jan. 1, 2012. Her career has spanned the school's two major disciplines – journalism and strategic communication. After starting her broadcast journalism career in Buffalo, N.Y., she spent more than 20 years in Washington, D.C., as an anchor and reporter covering politics, including serving as a White House correspondent for ABC News. She also reported for CBS, NBC and CNN, and hosted the “Diane Rehm Show” and “Talk of the Nation” for National Public Radio.

King then worked nearly five years in the U.S. Department of Labor as the assistant secretary for public affairs and as the executive director of the Family and Medical Leave Commission.

In 1999 she joined Carnegie Corporation of New York as vice president for external affairs. She launched and led the Carnegie-Knight Initiative on the Future of Journalism Education in collaboration with the John S. and James L. Knight Foundation and 12 premier U.S. journalism schools including UNC.

King serves on numerous boards, including BBC Media Action, N.C. Public Radio, Carnegie Council on Ethics and International Affairs and her alma mater, Fairfield University. She received the DeWitt Carter Reddick Award for Communication Excellence from the Moody College of Communication in 2015 and was inducted into The Buffalo Broadcasters Hall of Fame in 2014. She was awarded the 2018 Earl Gluck Distinguished Service Award by the North Carolina Association of Broadcasters (NCAB).